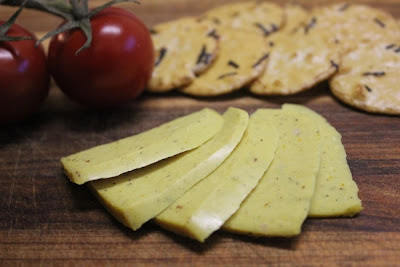 I recently met someone who had spent a year on a project where she read through journals to search for a topic and then compared her work to expert use of search engines to find the same topic in those journals.  The search engines were no match for a human.  We expect we type a search term into Google and find exactly what we want.  But it doesn't work that way.

When I bought my first bag of hemp seeds ($17 per 250g at Wholefoods), I was so excited yet unsure what to make.  A lot of them have gone into our morning smoothies.  I didn't find many recipes to inspire me.  (When I buy a new ingredient I often curse myself for not having the foresight to bookmark recipes I have seen using it.)  Searching the web can be so frustrating!  However, one result was most fortuitous.  I found Nava Atlas's Chickpea and Hemp Seed Cheeze. 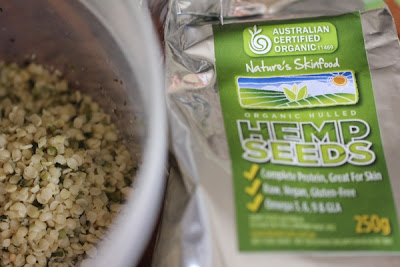 Before I rave about vegan cheeze, I must quickly say how pleasing I have found hemp seeds.  I bought them because I kept reading how nutritious they are (full of iron, omega-3s, protein, calcium, fibre etc etc).  They actually remind me of finely chopped walnuts with a buttery nutty texture.  For those who are unfamiliar with them, I have read somewhere that they are not from the same plant as cannibis, so the only natural high they will give you is from the knowledge that they are super healthy. 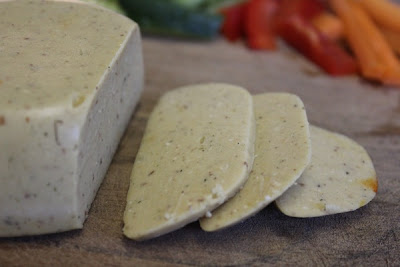 Onto the cheeze.  I made my first cheddar style vegan cheeze a few months back and loved it.  So much better than buying expensive over-processed vegan cheeze from the shops.  It sliced and diced and grated.  Not exactly the same as dairy cheese but close enough for jazz.  So I was keen to try other recipes.

I made this before we went swimming one morning.  Sylvia loved helping out.  As I only needed a cup of chickpeas I left the rest in the colander, intending to put them in the fridge for later.  Sylvia ate them up.  I love a recipe where I don't mind her nibbling on the ingredients!  This cheeze is nut free (if you choose to leave out the almond butter or use tahini).  It is full of good stuff without being too heavy.  I would even claim it is reasonably cheap to make if hemp seeds weren't so expensive. 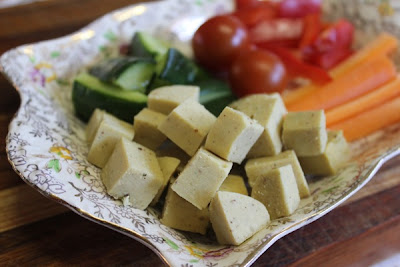 Making this cheeze wasn't as simple as the previous one.  I got bamboozled by the agar, an ingredients I am still getting to know.  I thought I could thicken it in the microwave but that didn't work so I ended up using the same method I had used previously, rather than Nava Atlas's method (as described in the Notes below).  On the plus side, it gave me an opportunity to address the lacklustre colour.  Turmeric gave it the yellow colour that we associate with cheese.

I've been enjoying this cheeze in slices on dry biscuits (crackers), in burgers and on pasta.  It is tasty and slices well.  Like the previous cheese, the texture reminds me of that processed German sausage that I had in many sandwiches with tomato sauce when I was a kid.  Yet don't be put off by this.  It is tasty and a lighter alternative to cheese.

I am sending this to Ricki for her Wellness Weekends event that features amazing healthy vegan food each week.

Set aside half the milk and the agar powder.

Place the remaining ingredients in a blender. 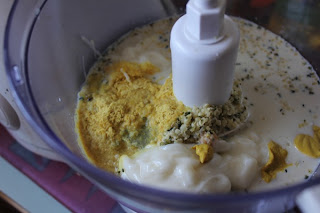 Blend until smooth.  I think I blended mine for about 3 minutes, scrapping down the sides every now and again. 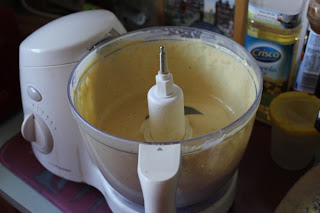 Mix the agar and the milk together in a small bowl (see below NOTES). 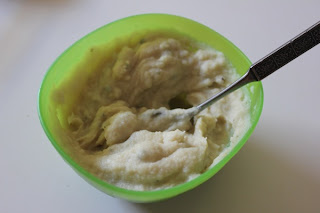 Given my experiences (see below NOTES), I would transfer the mixture from the blender into a medium saucepan, stir in the agar mixture and slowly cook over medium heat, stirring the whole time, until the mixture thickened and started to come away from the sides as I stirred. 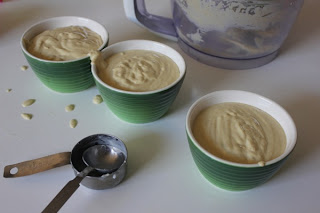 Pour thickened mixture into (ungreased) ramekins and allow to cool to room temperature (or if you are in a hurry put them in the freezer to cool quickly). 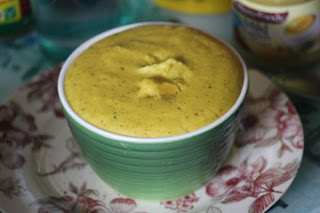 Keep in an airtight container in the fridge.  I have had this batch of cheese for about two weeks and it is still fine.

On the Stereo:
The World of Michael Nyman

This post is part of Vegan Month of Food October 2012.  Go to my Vegan MoFo list for more of my Vegan MoFo posts.
Posted by Johanna GGG at 13:22