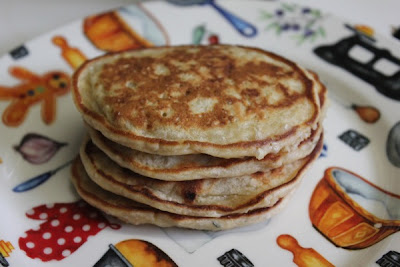 Pancakes are an excellent way to start a busy weekend.  This weekend has been full with markets, the pub, craft, baking and a birthday lunch.  It is the second weekend in a row that old bananas - that didn't make it into smoothies - went into banana oat pancakes.  After I made a batch last weekend, Vegan MoFo made me wonder how could these be veganised.  This weekend I had a go, using applesauce and chia seeds. 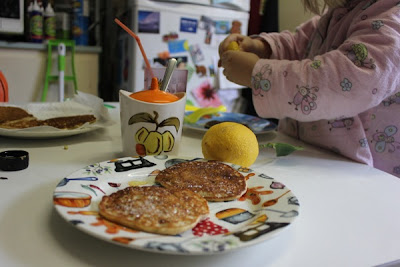 The pancakes were good but had a quirk I have noticed when I have tried making vegan pancakes before.  Pancakes with egg are almost cakey inside but I find vegan pancakes quite soft (almost gooey) inside.  It is something I will continue to investigate.  If anyone has any suggestions, they are most welcome.  Nevertheless, the pancakes were gobbled up readily by all of us.

We ate the pancakes with maple syrup at first.  But as a child I never had maple syrup.  It wasn't a common sweetener back then.  We usually had either butter and sugar or lemon and sugar.  So I revisited that childhood delight of watching the lemon juice melt the sugar crystals on the pancake. 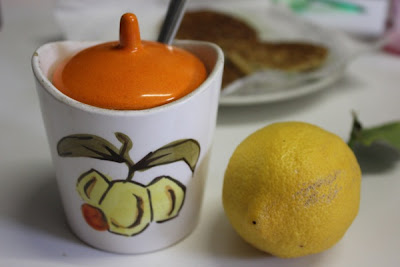 On Saturday, we met up with a few people at the Fitzroy Market.  We have become regulars there, because E plays ukelele there.  It is a great car book sale market.  The focus is not on food.  Yet there is enough food to please.  We usually buy a barbecued vegetarian sausage wrapped in bread and smothered in sauce.

Yesterday we gave the cake stall a miss in favour of the icy poles, made with real fruit.  I had a blackberry lemonade one, Sylvia had a strawberry one, and Yav and Florence had a mango and coconut one.  They were predominately fruit and wonderfully refreshing. 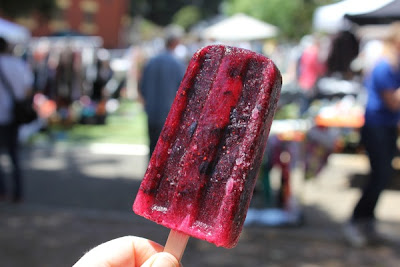 When I could drag Sylvia away from playing hide and seek with a new-found friend, we browsed the stalls.  I bought Sylvia a necklace for $2 and Yav bought a handful of necklace for Florence for $1. Heather bough apricot jam.  Mum and dad bought coconut ice.  E found a few interesting books, including a wee 1977 recipe book for me called A Vegetarian in the Family: Meatless recipes for the odd one out by Janet Hunt.  (No stigmatising vegetarians then!) 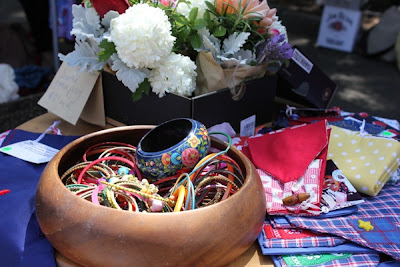 After the market, we all got paranoid about parking inspectors (they are mean in the Fitzroy streets) and decided to move our cars before setting off to the pub for drinks and nibbles.   We had a fantastic time at the Rainbow Hotel.  The food was delicious and the beer garden was the perfect place to relax.  I'll write about it more later so today I will just share a photo of nearby graffiti. 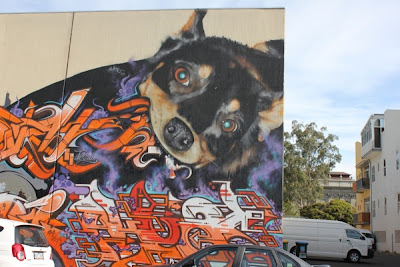 This morning Sylvia and I did some craft with egg cartons.  We made monsters that were inspired by Red Ted Art's Blog.  Having watched a lot of Mr Maker lately, we mixed paint and gloopy glue, and then we had stuck on wool, beads, glitter, fabric hearts, jewelled stickers and googly eyes.  When we had made enough monsters, we put a lot of our craft stuff onto a piece of paper.  Great fun! 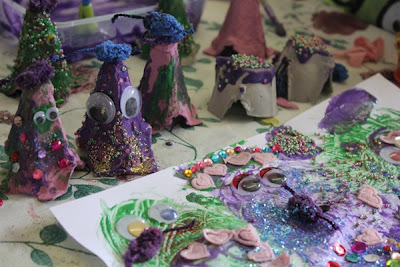 After craft, we baked some yummy biscuits before heading off to Hellenic Republic for my sister's birthday.  It is such a fantastic place to eat, especially with a large group with various dietary requirements.  I wish I had taken more foodie photos but that was not that easy with a small child on my lap and a hungry family.  You can glimpse a small hand with one of the delicious chippies below. 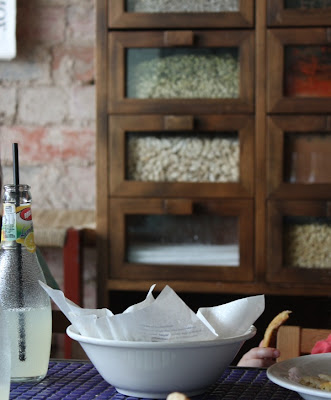 You will not be surprised to hear that it has not been a weekend for fancy dinners.  We have arrived home in the evening without a lot of energy or appetite.  Last night I made one of my favourite salads of last summer, smoky potato, bean and corn salad.  Not only was it just what I needed, but we also had leftovers for tonight.  Hope everyone else has enjoyed their weekend.

Mix melted margarine, applesauce, milk, golden syrup, oats, chia seeds and hemp seeds.  Leave 5 minutes.  Add flour, baking powder and banana.  Mix til you have a thickish batter.  It should be a thick pouring consistency - add a little extra milk if it is so thick that it comes off the spoon like cookie dough.

Heat a frypan over medium heat.  Melt a little margarine in the frypan - the pan should be liberally greased rather than awash with butter.

Drop dessertspoons of batter into the frypan.  Fry a few minutes until bubbles appear and the mixture dries out a little to look cooked.  Flip over and fry another minute or two until the other side is golden brown.

Serve warm with maple syrup or lemon and sugar.

UPDATE: February 2015 - I have revisited these pancakes and am much happier with this vegan version of the Banana Oat Pancakes.

On the Stereo:
Back to Basics: Billy Bragg

This post is part of Vegan Month of Food October 2012.  Go to my Vegan MoFo list for more of my Vegan MoFo posts.
Posted by Johanna GGG at 23:01