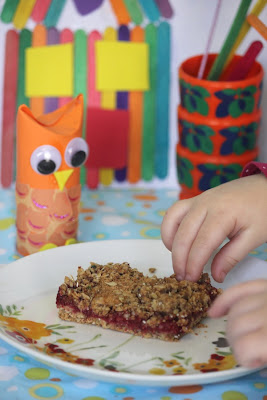 The raspberry oat slice was born out of a promise.  There was no bread or muffins or crumpets in the house and I had told E I would make something.  I meant a loaf of bread.  But when I still hadn't made it the next morning, I remembered this recipe in Color Me Vegan.  It was much faster than waiting for yeast to rise.  It gave Sylvia and I more time for craft.  So I will tell you about both today but first a whinge.

As I wrote last night, I have having computer problems - it seems to happen every now and again on this blog.  I still haven't solved it (but thanks to those who have responded) but have a few ideas.  It means that it is taking time from my blog and making it harder to comment, so apologies to those whose blogs I am commenting on less than I would like. 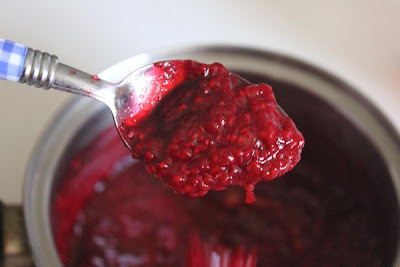 And while I am being down in the mouth, let me tell you that it is not just my computer.  We had a leak with our washing machine last week and I've had to replace my favourite big frypan which is just too scratched.  Why don't these things last?  And why is J. K. Rowling's new novel so grim.  I could really have done with a Harry Potter character who was light and warm in a dark world this week.  Instead when I finished the novel, the world seemed very bleak. 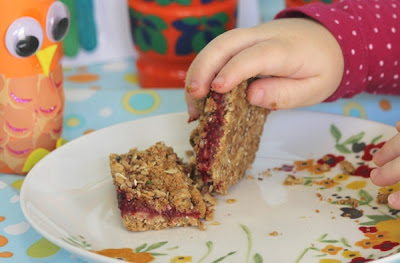 Rant over.  I'll put my happy face back on!  You see, raspberries make me very happy.  Sylvia too.  We made this raspberry oat slice one Saturday morning recently and it was amazing.  I tweaked the recipe slightly to reduce sugar and add a few favourite things.  But as Sylvia is so helpfully demonstrating in the photo above, it held together beautifully.  As well as tasting amazingly delicious.  Not too sweet.  Full of fruit and healthy stuff.  Even E said it was nice for a slice with so much fruit in it.  (Though I think he was relieved that I then made a loaf of bread that day too.) 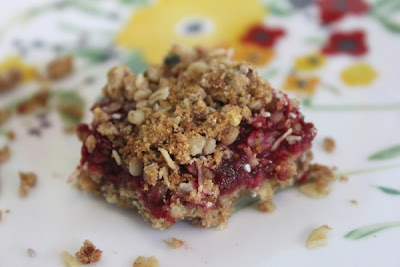 It was one of those lovely lazy weekends when I had time to bake and sit on the verandah in the sunshine chatting with our neighbour, take Sylvia on her tike to the park, walking with Sylvia and E to a local cafe for lunch.  Browse op shops.  And do craft. 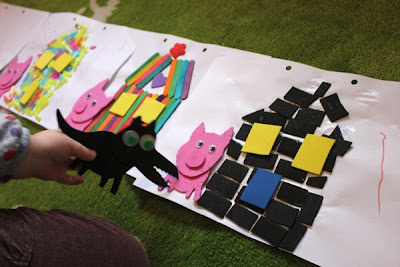 Sylvia and I love doing craft but I get so busy that it hard to find time sometimes.  So it is nice to look back at a few things we have made lately.  Above is our Three Little Pigs project.  It was inspired by drinking straws.  A straw house.  And a wooden house of coloured icypole sticks.  And a brick house of foam squares.  We made three little pigs and then the big bad wolf.  It was fun telling the story with the characters.  And later I found the three little pigs snuggled up with the wolf under a blanket. 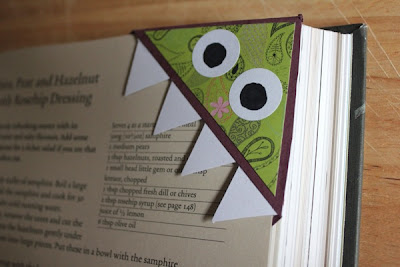 This monster bookmark is a grown-up craft project.  I made a few as presents lately.  They were based on the ones on Tally's Treasury.  Sylvia wanted them all for herself. 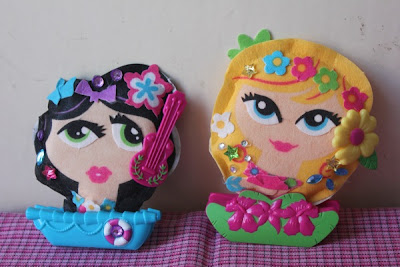 Above is some little girls that Sylvia and I made using some Magic Fabric kits that my sister in law Erica gave me.  I'd never heard of it before but it is quite fun to stick on all the bits and pieces.  Great for a quick craft session.  Can you spot the ukelele that has been very popular?

Lastly this owl below was really my project, though Sylvia sort of danced around the edges.  I have a photo on pinterest of some owls made out of toilet paper rolls.  It is one of my most popular pins and yet the link is broken.  I finally had a go at making some.  They don't look as cute but the card I used for the feathers was too stiff and each row had to be held on to dry with a rubber band, so finally I just glued on some googly eyes and a beak and feet and it was close enough for jazz! 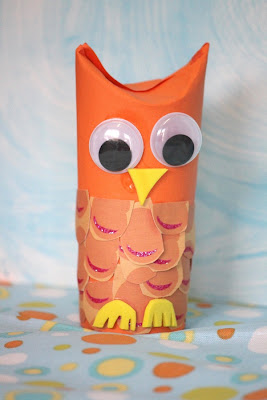 I was bemoaning to a colleague today that Sylvia would never learn to clean up because I much prefer craft to housework.  She replied that Sylvia would be happier to remember a childhood or craft than housework.  (Which is true, though when I was talking to my mum about how much I enjoy craft, I mentioned that I didn't do much as a kid and she told me that actually I was always making something.  So there are no promises about what Sylvia will remember.  But I digress).  Makes me wonder if this post will be around when Sylvia is a grown up to remind her of all the craft and yumminess of her childhood.  And will she need reminding?

Make the raspberry sauce first. Simmer raspberries, maple syrup and lemon juice for about 8 minutes or until the sauce starts to thicken. Set aside. As it cools it will thicken more.

Mix remaining ingredients (except the coconut sugar) together until you have a clumpy mixture. Press half of it into a lined 20cm (8 inch) square cake tin. I started doing this with the back of a spoon and then found it easier to do it with my hands. Bake at 180 C (350 F) for 20 minutes.

Pour raspberry mixture onto cooked base and scatter with remaining half. Sprinkle with coconut sugar. Bake for another 20 minutes until the top is golden brown. Cool in the tin. Cut into 16 squares.  Eat warm or at room temperature. Keeps for at least three days in an airtight container.

On the Stereo:
The Singles: Suede

This post is part of Vegan Month of Food October 2012.  Go to my Vegan MoFo list for more of my Vegan MoFo posts.
Posted by Johanna GGG at 22:51