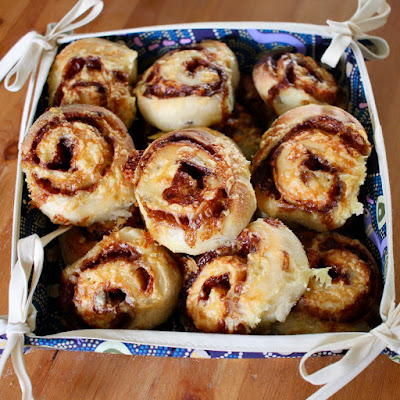 Ever since I have been doing my overnight sourdough bread I have wanted to try it in Australia's iconic cheeseymite scrolls.  It took me until a few weeks back to try it.  And then I needed another go last weekend to get it right.  I really love the cheeseymite scrolls from Bakers Delight using the classic Aussie combination of cheese and vegemite but there is something magical about fresh bread from my own oven.

We had a bit more time than we had expected on Sunday so it was a more leisurely morning that expected.  I was able to wash the sheets and change my doona ("burrito style").  After the cheeseymites were baked I took Sylvia and her bike to Officeworks and Bunnings.  With a cheeseymite in my bag in case we got hungry.

Now let me take you through the baking adventures of cheeseymites scrolls. 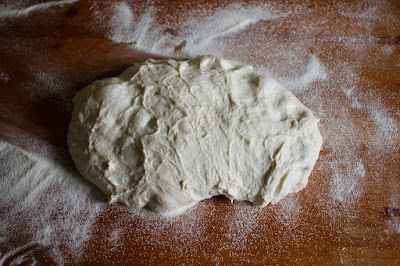 Firstly I make the overnight dough.  This was my first go at it.  And while it is great in bread loaves and rolls, I think it was a bit tough for the cheeseymites.  On my second go, I found that I forgot to put on the dough til I was going to bed and then forgot to add in some sugar and oil and had to knead it into the dough.  This is not recommended! 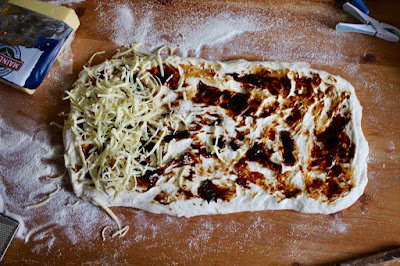 This is my first go at rolling out the dough.  It was too thick and you can see in the below pictures that there was not enough of a swirl.  Sylvia (who is often known to take her cheese slices out of cheese and vegemite sandwiches and leave them in her lunchbox) said there was not enough cheese.  Actually I think the amount of cheese on the dough was fine but the lack of scrolling meant you didn't get enough overall. 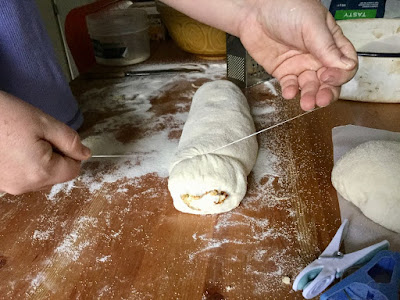 What I did get right with the first go at the cheeseymites is cutting it.  I took some dental floss (because I think we have fishing line somewhere but I couldn't be bothered hunting it out) and washed the mint flavouring off it and used it to cut the rolls into pieces. 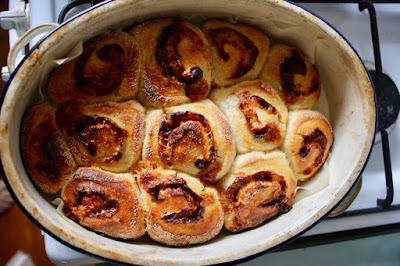 Less successful was baking the rolls in the dutch oven I use to bake my loaves and bread rolls.  The cheeseymites came out quite misshapen looking.  I needed a bit more curves and less corners in the shapes. 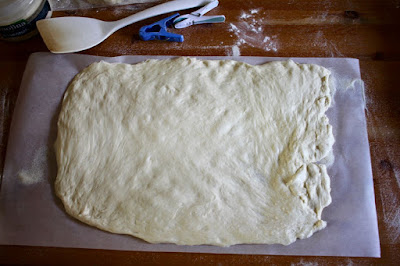 Here is my flattened dough when I tried again.  On notable difference is that I patted it out on a sheet or baking paper.  This helped me to roll it (like one of those sushi mats) and made sure it did not stick to the table top. 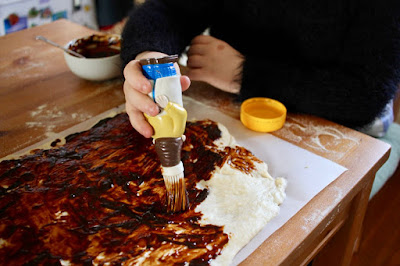 A little tip I picked up when reading people who had already made cheeseymite scrolls is to mix the vegemite with a little water.  Compare the above picture of sylvia brushing on the watered down vegemite to the earlier photo of the sporadic dabs of vegemite . 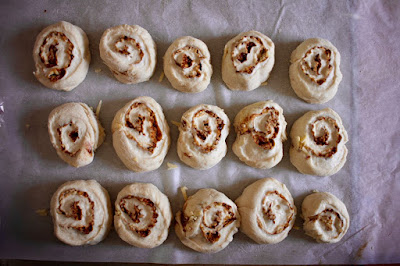 The scrolls looked quite small when they were rising.  They rise a bit when baked but were never going to be the huge scrolls that Bakers Delight make; the scrolls that began our national obsession with cheeseymite in the 1990s.  (Or more accurately, took a traditional love of cheese and vegemite and coined a term for it and then a scroll to feed our need for this comforting combination.) 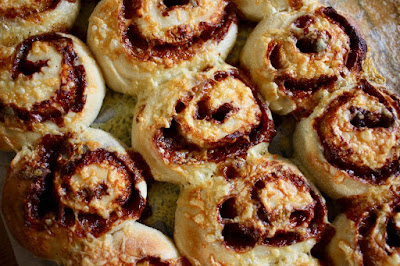 And finally they were out of the oven and hard to resist.  I could have eaten them all in one day, they were so delicious.  Instead most of them went into the freezer.  They really are better fresh.  And they are great for lunches, especially when busy.  All I need to do on a busy morning is to give them a short blast in the microwave to start the defrosting and then pop them in the lunchbox.  Then at lunchtime I have a home-baked lunch to be proud of!

I am sending these cheeseymite scrolls to Honest Mum's Brilliant Blog Posts and A Mummy Too's Recipe of the Week.

About an hour before going to bed (or first thing in the morning) mix everything together to make a sticky dough.  It is easiest to mix everything except flour first and then add flour.  Use hands to mix if required.  Set aside covered with a tea towel for half an hour.  Knead in the bowl for about 1 minute (sprinkle with a little flour if necessary).  Cover with greased clingwrap and leave at room temperature for 8 to 12 hours.

Scrape dough out onto a well floured board.  Pat the dough onto a long sheet of baking paper into a rectangle of about 45 x 30 cm.  It should be no more than 1cm thickness.  Mix vegemite and water and spread or brush over dough.  Sprinkle with about 150g grated cheese.  At the long edge, carefully roll up like a swiss roll using baking paper to support the dough until you have a long roll.

Use a non flavoured dental floss (I washed and dried mine) or fishing line to bring under the edge of the roll, wrap around the dough, cross over and swiftly pull the ends to slice pieces of about 1.5-2cm.  Place each piece or cheeseymite scroll on a lined tray about 1cm apart.  Cover with a piece of greased clingwrap.  Preheat the oven to 240 C and leave for about 30 minutes or more.  They will not rise very much but that's ok.

When it time to bake, remove the clingwrap and cover the cheeseymites with foil.  Bake for 10 minutes.  Remove foil, reduce heat to 220 C, sprinkle with cheese and bake for a further 20 minutes but keep an eye on them after 10 minutes to check they are not browning too much.  Once they sound hollow when tapped remove from tray and cool on a wire rack.

NOTES: I usually make two loaves with my overnight sourdough bread recipe.  When I made these rolls I made twice the dough but used half it for a loaf of bread and half for the cheeseymites.  I halved the dough for this recipe but if you want a loaf as well you could double the dough recipe.  I have made a vegan version of these rolls using vegan cheese some years ago and they worked quite well though I would put the cheese on only 5 minutes before the end of baking.

On the stereo:
Boy Child: Scott Walker
Posted by Johanna GGG at 21:50