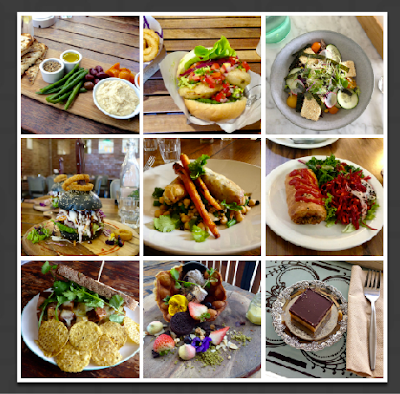 It has been busy lately and, as always, I visit more cafes than I ever have time to write up.  So here is a wee round up of some of the places I have been over the past year.  I have chosen the ones of which I have decent pictures.  Some are from places I have already been and others from places I want to write up when I have been back again. Yet again showing just what an amazing array of food Melbourne has to offer. 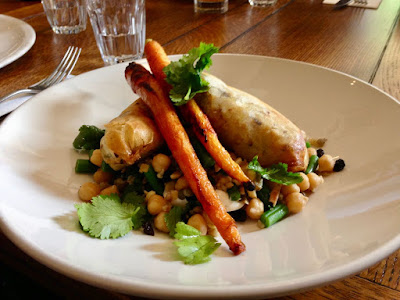 Naughtons Hotel is a place we would go drinking sometimes when I lived on campus at the University of Melbourne as a student.   More recently I have been there for a couple of work lunches.  It was a little hit and miss but I really loved this dish of cauliflower and almond pastry, harissa carrots, coriander and grains, labneh ($25).  The pastries were delicious but the overall dish was lighter with the nice salad. 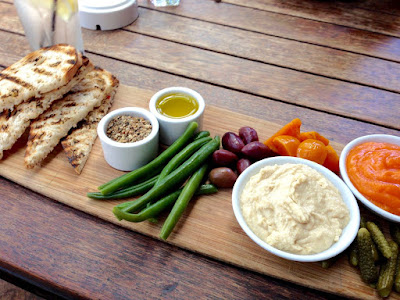 I wrote about the Post Office Hotel back in 2012.  Since then it has expanded into another large dining room.  The menu is no longer the innovative middle eastern dishes.  It is more a pub classics style but done creatively with burgers, pizza and pasta.  I have eaten there a few times but the most memorable meal I have had was with my mum over a year ago on a balmy lunchtime in the beer garden.  I really loved the vegetable charcuterie platter.  It had chargrilled sourdough bread, olive oil, dukkah, green beans, olives, hummus, gherkins, possibly a pumpkin dip and some orange vegetables that at the time my mum and I had trouble identifying.  Perhaps a squash. 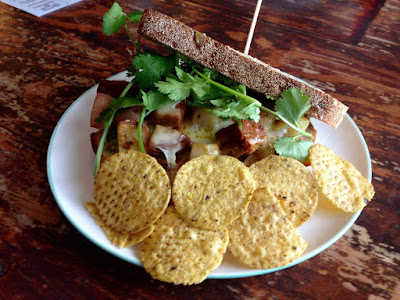 True North is another local cafe that I have been to every now and again since I wrote about it in 2014.  The sandwich really impressed me with the vegan chorizo, roast potato, melted cheese, lime and coriander pesto. I removed the fresh coriander!  It was served with lots of corn chips.  Not the easiest sandwich to eat but really great comfort food.  I visited again last week and had quite a similar filling in a quesadilla which was also very good: pan fried potato and vegan chorizo with cheese and jalapenos served in a toasted flour tortilla with lime aioli and greens ($19).  I like that they continue to try new things.  Their passiona pancakes are on my list of dishes to try. 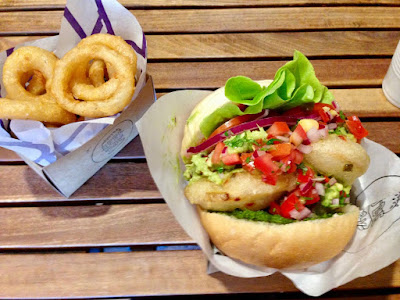 I visited Rude Boy Burger with Faye who wrote about it in her Veganopolous blog.  Both of us had the Vegan Latina with chilli and spring onion fried potato cake, chickpea salsa, chimchurri, jalapenos, avocado, chipotle relish, lettuce, tomato and onion ($13.50).  We were there on a Tuesday when all the regular burgers were half price.  Hence my decision not to try a special vegetable burger.  I was really pleased with my choice.  Stuffing a potato cake in a burger is genius.  It would be too much carb if you stopped there but with all the add-ins, it was really good.  But filling.  I made the mistake of also ordering some onion rings.  They were nice but the burger was enough and the potato cake was enough grease for one meal. 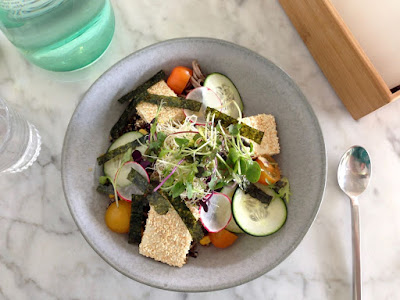 After I saw that Cindy had written about Humble Rays I was curious to try it one lunchtime. It is a really nice light space, though far bigger and busier than I had expected.  I ordered a bowl of vegetables, sesame seed tofu, seaweed and a yuzu dressing.  It was nice but quite light.  I had been disappointed the tofu didn't have a bit more flavour but it worked well with the dressing.  I decided to have dessert and chose the Green tea skookie.  It is a matcha choc chip cookie cooked in a small skillet, served with toasted marshmallow, vanilla ice cream, matcha cookie crumbs and white chocolate curls. The cookie was a bit dry but nice with all the toppings.  Just not quite enough chocolate for my liking.  I keep hoping to go back. 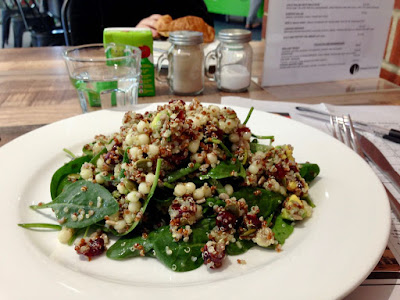 In the school holidays I took Sylvia swimming and we stopped for lunch afterwards.  The Coburg Leisure Centre cafe has been taken over by Two Monks and had some interesting dishes on the menu.  I ordered the (vegan) Quinoa, israeli couscous, spinach, avocado, pumpkin seed, sesame seed, dried cranberry with lemon, olive oil and garlic dressing ($16.50).  I really enjoyed the salad, despite the dressing being a bit more oily than I like.  I have tried some Israeli couscous recipes and not had great success.  This seemed a great way to serve it.  The drawback of eating here is the lack of any ambiance but it is great to have some decent food to eat after swimming. 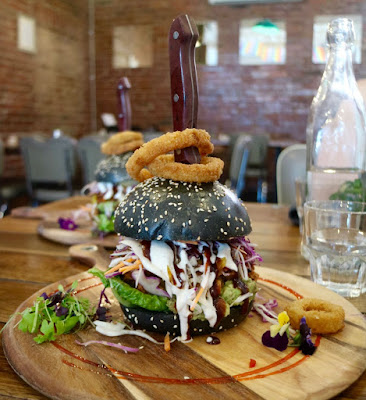 I was pretty keen to visit Handsome Her when it opened in a blaze of publicity over its idea of charging men a surcharge to raise awareness of the gender pay gap and donate the surcharge to women's services.  It has the same owner as the Glass Den.  The food is all vegan and very creative.  It took me until late last year to finally visit with Faye.  She has written about it on Veganopoulous. We had The Kelis - a pulled jackfruit burger with smoky barbecue sauce, rainbow slaw, mayo, avocado, onion rings, grilled pineapple on a charcoal bun ($21).  I enjoyed it but find pulled jackfruit quite juicy so the burger was quite moist but full of flavour.  I loved the pineapple on the burger.  A nod to the traditional fish and chip shop burger with the lot.  For dessert I tried a peanut butter chocolate cake pop which was delicious too. 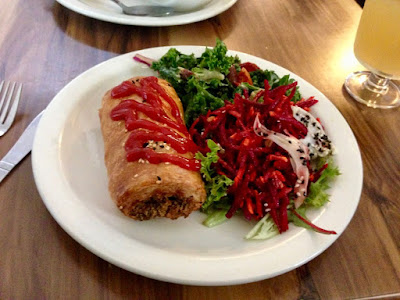 It also took me a while to get to the Mantra Lounge, a vegan cafe near The University of Melbourne.  (It is quite close to my old work place and I wish it had been there back then.)  Finally late last year I visited and had the sausage roll with the salads.  Really delicious.  I also had a refreshing home made lemonade.  A few weeks back I went again and had the satay curry with rice and roti.  It was really good with chickpeas and vegies but I was too deep in conversation to remember to take a photo. 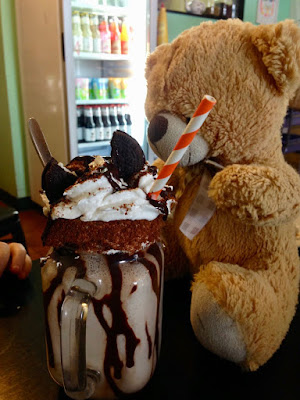 I've been to Mr Nice Guy's (vegan) BakeShop quite a few times since writing about it in 2014. Last year when we went, Sylvia was very taken by the idea of Monster shakes.  She tells me this one was the cookie monster.  It was an amazing creation of chocolate milkshake with lots of vegan cream, oreos, chocolate sauce and other stuff I can't remember.  It looked beautiful but was a bit sweet.  Less photogenic but more successful have been the meatball sub and the hot dog in a pretzel.  I still find it fun to look at all the cupcakes, doughnuts and cinnamon buns on display.  So much yumminess. 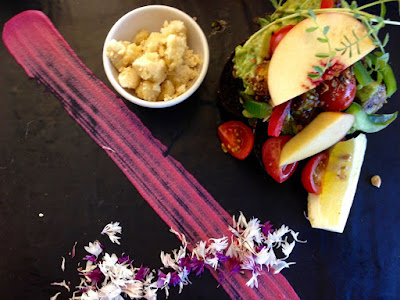 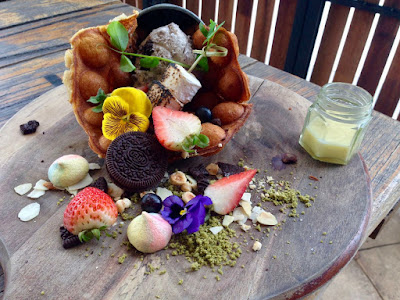 Yes I have had to share two photos from the Glass Den.  I have had quite a lot of meals there since I wrote about it in 2016.  Sadly my notes are pretty sketchy and my memory is worse.  Lately I haven't had many meals but continue to go there for a drink with friends.  I loved the hot apple and ginger juice with cinnamon last winter and hope it is back now the weather has cooled.  I am sad they stopped serving kombucha.  And I was a bit disconcerted to order a bagel and find their bacon had changed.  I liked their coconut bacon but now they serve more of a faux bacon that seems too real to be fake.

The food continues to be beautiful.  An instagrammer's dream.  I wish I had more notes on the dishes above.  I think the bruschetta might be peach and avocado with berry slick and maybe a charcoal bun.  I think the dessert is a bubble waffle with cookies and cream - oreos, mini meringues, blueberries, strawberries, ice cream, marshmallows, matcha cookie crumbs and caramel sauce.  Sylvia really loved the kids nutella and fairy floss brioche burgers when we went early last year.  I really should check out the menu again soon. 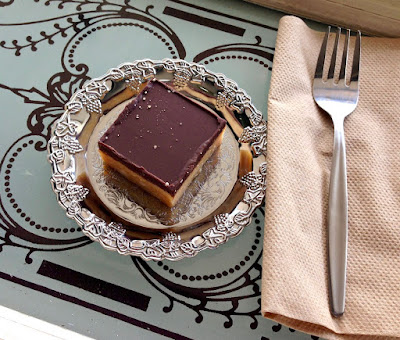 Lastly a small cafe has opened at the top of Foleys Arcade in Coburg facing out onto Coles carpark.  This is a lovely welcoming space with a few quirky touches.  The bench at the window is actually an old door that has the beautiful etching in the above photo.  I have had a lovely burek and lentil soup there.  E loves the Turkish coffee and Sylvia had had a few ice creams there.  The chocolate caramel slice pictured above was impressive not just because it tasted so good but also because it was just the right size - a few mouthfuls rather than the size of a mattress!  And the owner is a lovely friendly guy who is interested in making sure the cafe has food to suit a whole range of dietary requirements so he is always trying new things.  Definitely worth a visit after your next supermarket trip.
Posted by Johanna GGG at 23:24