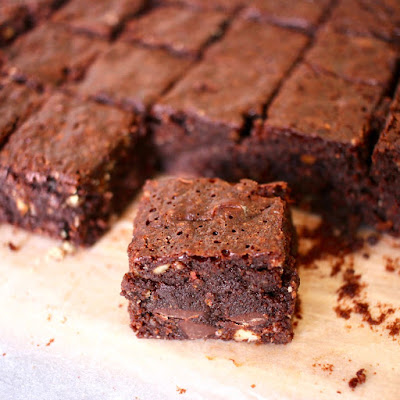 On the weekend we went for lunch at East Elevation where the mushroom, lentil and gruyere pie (on special and too mushroomy for my tastes) was very meaty and the brownie was tempting.  "But why would you buy a brownie when you are going to make one" spoke my wise child.  Indeed.  I put away all thoughts of buying the brownie, and went home to bake one in the short space of time before going out again. 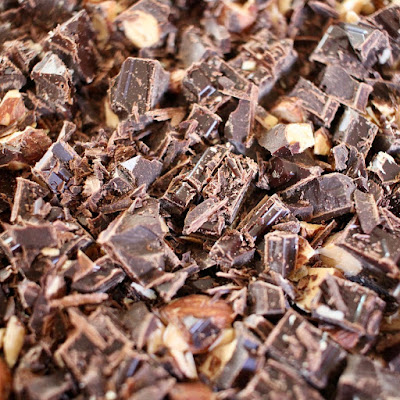 As soon as I had seen Choclette post about her Triple Chocolate Almond Brownies recently I thought of the bar of dark chocolate with whole almonds that E turned his nose up at and the bag of almonds in the freezer that was getting in my way.  I am very partial to brownies and flourless almond cakes.  This recipe was like both rolled into one.  Sylvia asked me to use some milo because I still have a huge tin leftover from baking cake.  (Curse you, supermarkets, and your specials on huge tins of milo.)

I mentioned that I made it in a short space of time.  I literally pulled the brownie out of the oven and rushed out the door.  The brownie was so gooey that I wonder if I should have cooked it longer.  In the photo above you can see that the edge pieces have a more baked look with holes/aeration.  I think I should have left it a little longer so that the middle also had that look.  However I have loved this brownie.  While I love my brownies a little more fudgy than gooey, it is incredibly chocolatey and rich.  Exactly as I would expect from the chocolate loving Choclette.  Not for the faint hearted. 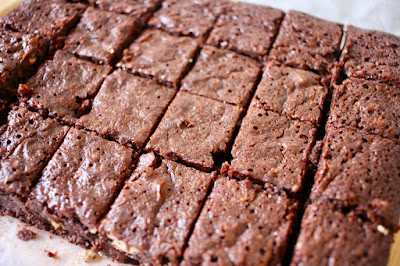 Before I go, I wanted to share a few random thoughts:
Now I am off to finish reading In The Woods and to try and avoid the temptation of the brownies left in the tub.  They are so good!

Almond brownies with milo
Adapted from Tin and Thyme

Melt butter and chocolate. Add sugar and milo, then eggs and remaining ingredients.  Bake in a lined and greased square 20cm cake tin at 170 C for 35 minutes or until baked on top and still a little soft underneath if you touch the top.  Cool in tin, cut into squares and store for 4-5 days in an airtight container.

NOTES: The almond chocolate I used was Whittakers which is 62% cocoa solids.  If you use milo it is not a gluten free brownie but you could use a GF hot chocolate drink powder instead.  Or check out Tin and Thyme for a GF version.

On the stereo:
Recurring dream: the very best of Crowded House
Posted by Johanna GGG at 22:50