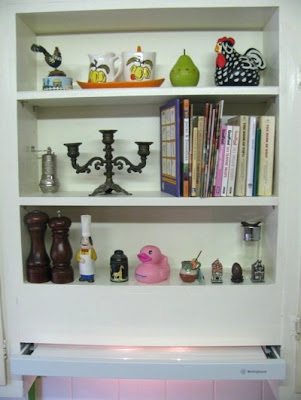 Finally our kitchen renovations have finished so I am going to take a bit of time to tell you about them. When I moved into our home over 4 years ago I loved the 1960s kitchen. It was compact but had lots of storage space. No fancy dishwasher or double sink for us. I only wanted to change two things: the benchtop that some idiot painted with oil paint and the dodgy old fan above the oven that would fall down every now and again. Then a friend suggested we move the bench against the wall. 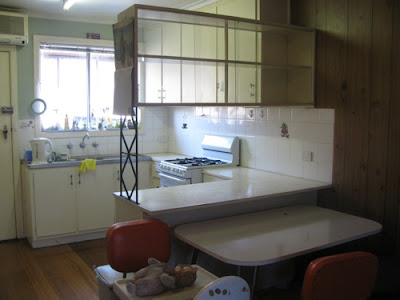 Here is the old kitchen with the bench and overhead display cabinet that is reminiscent of the kitchen we had when I was a child.

At first I resisted the idea of moving the bench but I grew to dislike the awkward corner where our table sat. Too close to the heater in winter and unbearably dark in summer. It took a while but over a year ago we started looking into getting the bench moved. I didn't want to remodel the whole kitchen. However I found it was harder to make changes within an existing kitchen than to just take it out and start again. Harder still was even getting quotes from builders - one never got back to us, another said his mother was sick but finally we got a reasonable quote. 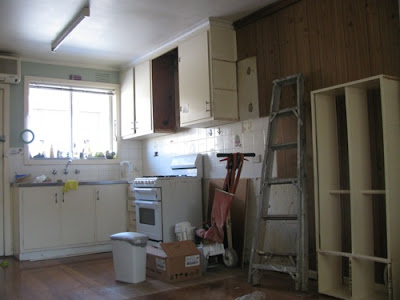 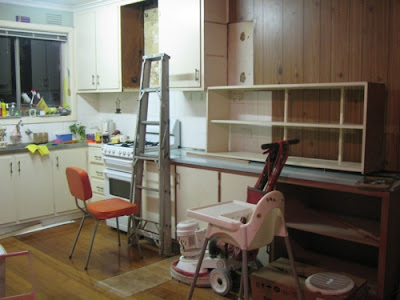 It felt terrible but it hasn't really been a great hardship - especially when we turn on the news and see devastation and heartbreak. We still had a functioning kitchen for most of the time - sink, pantry, oven and fridge. Except when the builder discovered he didn't have the right attachments for the new oven. He turned off the gas - which meant no hot water - left the oven unplugged and then didn't come back for a few days. There were a few baths run with the help of the boiling water from the kettle. 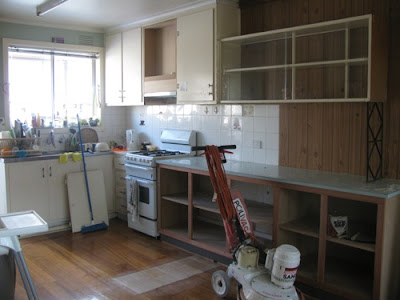 We are not the first to find how unreliable builders can be. It is hard to know if it is laziness or overcommitment. I suspect the latter. Whichever it was, we were frustrated to find, again and again, that we would be promised tomorrow or next week, only to be hit with another flimsy excuse. Our builder was willing to work with our requests but his time-keeping was just hopeless. 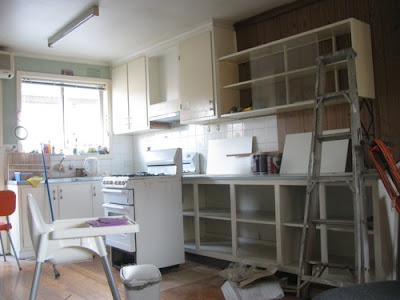 It is no fun living in a state of suspension. We were constantly trying to clear our things away from the builders fallout only to find he was not turning up. I had to dig into boxes regularly for bits and pieces I hadn't intended to part with for more than a few days. Sylvia has had her bedroom full of boxes for weeks, we have had the microwave on a table crammed between two couches and the new oven sat out in the backyard under a tarp far longer than we expected.

Eating also had its challenges during the temporary lack of bench space and stuff. We had many more takeaways than usual, I got to know the ready-made meals section of the supermarket, and perishables wilted in the fridge. I tried to make simple soups and smoothies to ward off the feeling of not eating as much fruit and veg as usual. My mum helped out with a beetroot and goats cheese tart (Sylvia loved the pastry but wouldn't eat the "jam".) 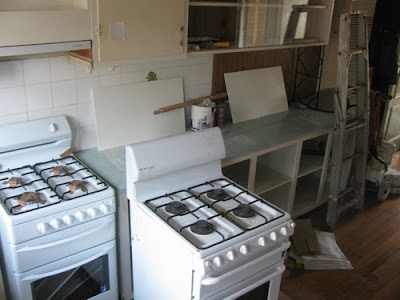 I have spent the last few days unpacking my boxes and thinking about how much meaning there is in all my stuff. Here is a sample of the memories that come flooding back as I unpack:
I don't use any of it as much as I would like but I love being able to bring it out for a celebration or just to make an ordinary meal into an occasion. Much of this stuff has been seen on the blog at one time or another and will be again. 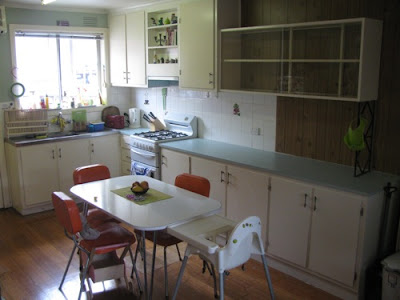 Meanwhile here is the new kitchen. When I showed my family this photo they laughed at the empty bench because it is just not us. Be assured it is now restored to its normal clutter as we sort out our boxes.

It feels like we now have the best of both worlds. We still have our 1960s kitchen, but with a modern open plan feel to it. I love having the table in the middle of the kitchen. A friend said it was like a farmhouse kitchen. It brings to mind some of the friendly kitchens in my former student houses. We have a new oven that should make baking and roasting far easier if my initial experience is anything to go by. Above the stove is a great little set of shelves (see photo at top of post). Perfect for knick-knacks and spices. 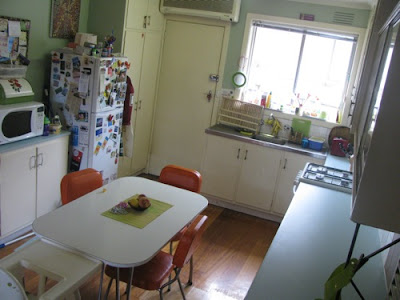 Here is the view from the other side. You can see our customary clutter on the fridge.

Sylvia loves the new kitchen. I am constantly dragging her away from playing with the light switch on the oven and hauling her off the table. Today she discovered how easy it is to drag a chair to the bench. Oh dear!

It is not all a battle of wits. I also am able to sit at the table and prepare food while Sylvia sits beside me. She feels more involved in the cooking. When I drained water from a saucepan of potatoes yesterday, she told me to do it at the table. Apparently that is where everything happens now!

We are still unpacking and adjusting to the new configuration. Already we are enjoying it. Yesterday we sat at the table and ate breakfast while spreading the newspaper in front of us. That could never have happened in our old kitchen. Life feels good!

More about my kitchen in Kitchen Notes.

Update September 2013 - The kitchen is looking slightly different since we got a new kitchen table and chairs.
Posted by Johanna GGG at 22:18