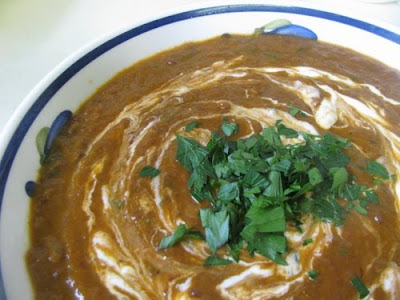 Sylvia going through a spate of firsts - first sticking plaster (bandaid), first reaction to an insect bite, first grazed knees, first bruise from a drawer falling on her foot (and I hope the last), first grown up jigsaw without the knobs, first time turning on the microwave (when I key in the time), first time putting the key in the car keyhole (with my guidance), first time blowing a kiss, first piggy back, first kiddies television program at home.

The television program we chose for her was The Clangers. It is an old BBC children's series about pink knitted characters who make funny noises. Sylvia was vaguely interested but not won over. She had a quick look but she had important things to do - puzzles and putting dolly in her little cot. When she did watch the screen she mostly wanted to stand close enough to touch it. The part that she enjoyed most was the soup dragon who dishes out soup to the Clangers. 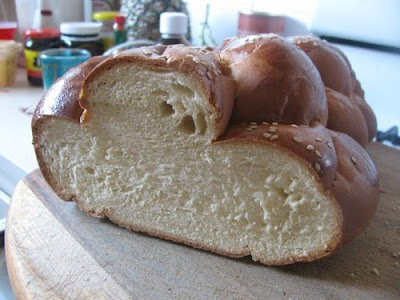 Last week in our house, I was the soup dragon dishing out Adzuki and Vegetable Soup to E and me. I spent an evening simmering the beans - three hours and they were still not soft. In desperation I blitzed them with the hand held blender. I came back the next day expecting to throw it out but it somehow was rather edible. The soup - served with a dollop of yoghurt, parsley and a slice of challah - was a hearty flavoursome sludge. Worth dragging my stockpot out of the bedroom in the middle of kitchen renovations.

So you see I had an adzuki bean crisis. It is not a bean with which I am familiar. When I started to look I found them nowhere to be seen and I finally found "seda" beans from El Savador in Casa Iberica. 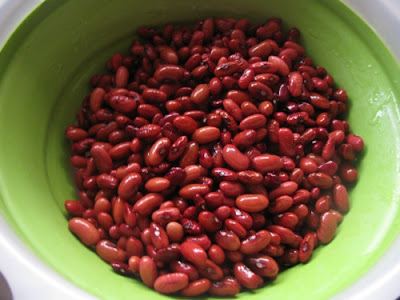 I am a little unsure what to do with the rest of the bag. Why did the beans seem inedible on the night of cooking and quite tasty the second night? Did they soften overnight? Was 8-12 hours enough soaking for the beans? Does it make a difference to simmer the beans with stock powder? Should I throw them out? Do I have time to experiment further? Since then I have found adzuki beans in Min Phat Grocery at the Queen Vic Market. Next time I might try these - because I need a stash for facon.

I am sending this soup to Lisa of Lisa's Kitchen for No Croutons Required , the vegetarian soup and salad blog event that she runs with Jacqueline of Tinned Tomatoes. Lisa chose whole adzuki beans or mung beans for this month. (NB I would have taken a photo of the soup with whole beans but I despaired of the beans cooking and lost my confidence in it.)

Previously on Green Gourmet Giraffe:
This time last year: Bread pudding and smoothies for vegie kids
This time three years ago: WHB: In Search of the Nectarine

Heat olive oil in a stockpot and fry onion for about 5 minutes. Add garlic and fry for 1 minute. Then add cumin powder and dash of chilli powder. Fry 1 minute. Add water, tomato paste and stock powder. Bring to the boil and then simmer for about 1 hour or until beans are almost cooked.

Add leeks, carrot, celery and smoke paprika. Boil and then simmer for about 20 minutes or until beans are cooked and vegetables are soft (I think I did 2 hours and still wasn't happy). If desired, blend using a hand held blender. (This helped when I felt beans weren't soft enough.) Check seasoning and adjust to taste.

To serve stir through parsley and ladle into soup bowls. Spoon a generous dollop of yoghurt into each bowl and sprinkle with a bit of additional parsley.

On the stereo:
Have one on me: Joanna Newsom
Posted by Johanna GGG at 20:41