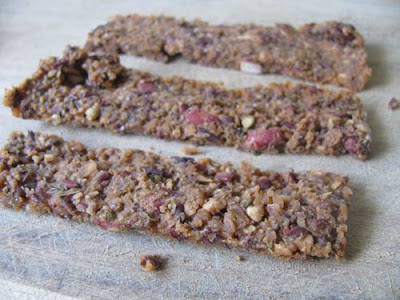 Before I became a vegetarian, one of the last meats I used to eat was bacon. I liked the flavour, though I found it strong as I ate less and less meat, but I also liked it because it was a garnish rather than a lump of meat. After trialing home made and shop bought vegetarian bacon (fondly known as facon in my house), I have finally found a facon to love. 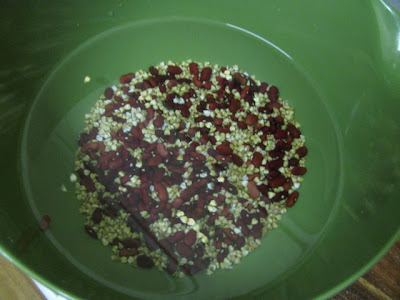 It's not that I miss bacon terribly. I gradually learnt that bacon wasn't the only source of that seductive smoky flavour. Smoked tofu, smoked cheese, smoked paprika all make their way into my cooking. In fact I now often find myself needing a shake of smoked paprika in many savoury dishes. I suspect liquid smoke would be in my pantry too if it was easier to find here.

Yet occasionally I also want the crispy, chewy texture of bacon - without the fleshiness. I've tried tofu and tempeh bacon (or facon) since becoming vegetarian but they were never crisp and chewy enough. I've tried the fluorescent pink slices of facon from a packet and they seem packed with lots of nasty flavourings and just taste too like bacon. 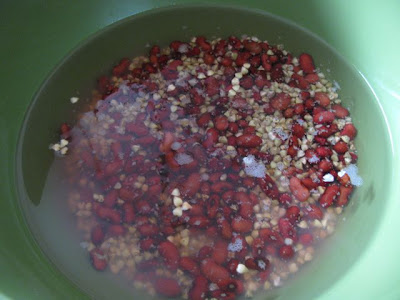 Last year I discovered a new facon recipe, thanks to Sarah from The Ordinary Vegetarian. It is a matter of soaking buckwheat groats and adzuki beans, adding lots of flavour and grinding them into a paste that is baked into "rashers". The recipe is one of those that initially seems impossible. It seems the mixture will never become a paste and then that it will never spread into the tin or hold together but it does. It is surprisingly easy to make. And it lasts for many meals.

I first tried this recipe in December with my friend Yaz. It seemed to take ages to blend and Yaz added some extra spices because he thought it too bland. But the result was outstanding. It was just amazing to encounter such a tasty version of vegetarian bacon that held its shape so well. I vowed to make it again soon. 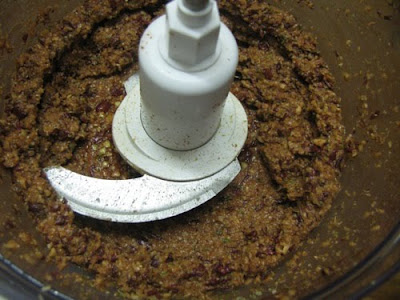 It can take some time to get around to even my most favourite recipes. With a new food processor and Sylvia's birthday coming up, I finally made it again a few weeks back. Making it seemed like an exercise in kitchen archeology. I really wanted to add sage and liquid smoke. I know they were there. The liquid smoke was last seen in Sylvia's hands and could be anywhere. I can't think where the sage went. I looked. I founds a lime that had turned to black powder right at the bottom of my fruit bowl, a tube of baby food that we bought for Sylvia in Scotland in 2009, and was surprised to count the number of bags of sesame seeds I have inadvertently bought. All I could do was add more smoked paprika and find a few dried out sage leaves in the bottom of the fridge. Maybe next time I will be better prepared. 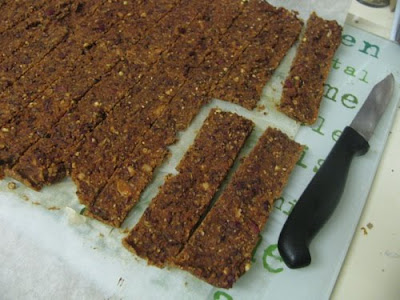 E commented on the pleasing cooking smells while I baked the facon. He is a meat eater who loves a rasher of bacon so that was promising. The result is a rasher that stays together but needs to be fried to really hold its shape and give the right texture. The texture can be a wee bit nubbly but gets more chewy when fried. It even burns just like bacon! More importantly, it is also full of protein and flavour.

One advantage over true bacon is that there is very little fat in the actual facon. I have found that vegetarian faux meats don't release lots of oil like meats of the flesh. This means that you have control over how much fat you want to add when cooking. A mere spray is enough but a generous slurp is lovely. 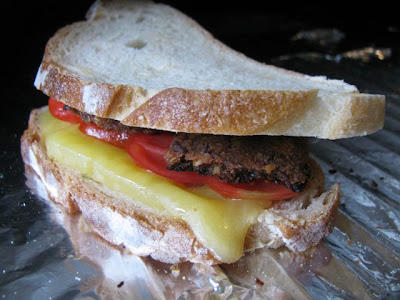 Once I had my facon, the challenge was to think about how to use it. I had already successfully added it to pasta and to cheese and tomato sandwiches when I made it the first time (NB Sarah's facon, tomato and avocado sounds equally good). You may have noticed it popping up in a couple of recent recipes. It went very well in my Artichoke Muffins and on the Fast Track Pizza.

I was surprised that it took a bit of digging through memories and recipes to find ideas on what to make with facon. It seems I am so used to not using it that I have wiped it from my culinary thoughts. But I do have fond memories of my mum making meals with bacon or ham. Split pea soup, baked potatoes, potato salad, zucchini slice, in fried potatoes or fried cabbage, and in a quiche. In fact one of my most nostalgic moments recently was frying onions and facon while making the lentil and potato filling for pancakes. The smell from my childhood was just amazing. And yet it was different. It was full of the right flavour without also smelling of flesh. 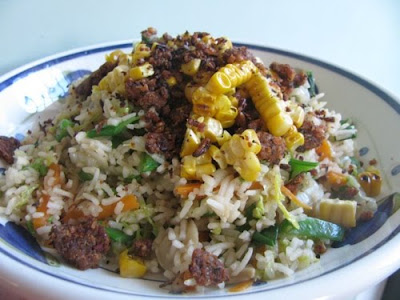 I saw a recipe for fried rice with bacon in the Saturday Age newspaper (5 March 2011) and made my own version, which was fantastic. I am now considering the other recipes I have passed by because they include bacon. I am planning to try maple syrup and facon on pancakes, scrambled tofu and facon, and maybe add some facon to a cassoulet or baked beans. The possibilities are endless.

In my new-found enthusiasm for facon, I have searched for ideas for my next batch and listed them below. I have divided them into vegetarian recipes and non-vegetarian recipes because I need to be aware of the issue I mentioned above of how much extra fat is needed depending on if a recipe uses bacon or facon. I have also included some recipes that I have blogged.

In my searches I have also found that others have successfully made facon out of coconut, eggplant, mushrooms and gluten flour. It seems we vegetarians and vegans have a healthy thirst for a good smoky crispy chewy facon recipe! 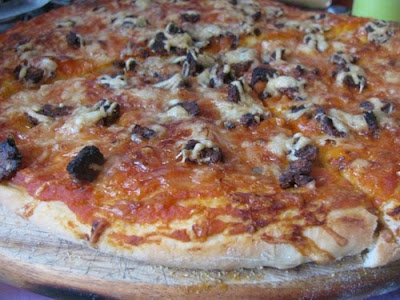 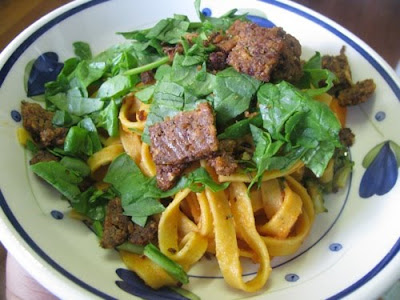 Bacon Recipes (that I would like to make vegetarian):
I am sending this to Ricki and Kim for their SoS Challenge, their event to encourage savoury and sweet dishes made with a featured ingredient each month. The theme for march is adzuki beans. I was pleased to see Kim's list of alternative names for the bean as mine came by the name of "seda beans" but still seemed to do the trick.

Facon (a.k.a. Amazing Homemade Vegan Bacon)
adapted from No Meat Athlete via The Ordinary Vegetarian
Soak the beans and groats overnight in the same bowl. Drain and place in the food processor. Blend roughly and add remaining ingredients. Blend to make a paste. This takes a while and a bit of scrapping down the sides. A little texture is fine (see my photo towards the top).

Preheat the oven to 200 C or 400 F. Line a lamington tin (30 x 20 cm or 13 x 9 inch) with baking paper - making sure the paper overhangs the sides to help you get it out - and then oil the baking paper. Spread the mixture into the tin. It will seem very thin but that is good - it is meant to be. Bake for 10 minutes. The top will be dry and slightly browned but not crisp.

Cool for 10 minutes. Remove from tin using the baking paper overhang like handles and lay on a flat surface where you can chop. Cut into 24 pieces (see mine in photo towards the top of the post) or any size you desire. At this point it is a little fragile. Store in an airtight container in the fridge for 2-3 weeks or store in the freezer. It can be cooked straight from fridge or freezer. To eat, fry in a little oil spray or oil or spray and crisp up under the grill (broiler).

On the Stereo:
Paranoia in Hi-Fi: Nurse with Wound
Posted by Johanna GGG at 22:00