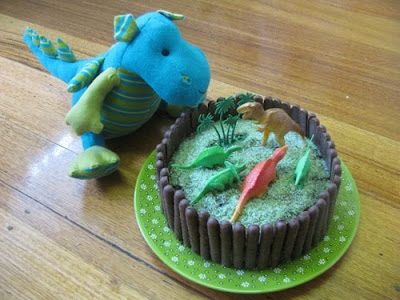 Sylvia's birthday cake on her recent birthday was a simple affair because I wanted to keep the more complicated cake for when there were more people to share it. We invited friends and their kids to celebrate in a nearby park last weekend. I swithered and dithered over lots of birthday cake designs - lego, dollies, cats etc. In the end I had to be realistic about how much time I had to decorate the cake and settled for a classic farmyard cake from the Australian Women's Weekly (AWW).

I had an easier time of deciding on the type of cake to bake. I had chosen a white chocolate mud cake. It was a simple recipe to bake the night before. (Thanks to Chele for inspiration.) I did wonder if anyone has ever seen white mud! I also made hummus, vegan queso dip, and grubs on the previous day. All I had to do on the morning of the party was decorate the cake, chop vegies and fruit, open some packets of rice crackers and made tiny teddies in racing cars. 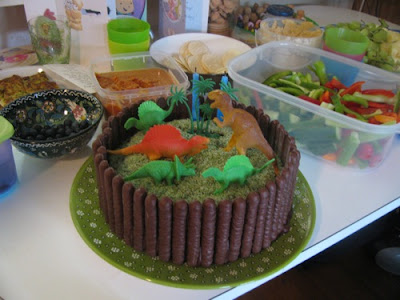 I woke on the day of the party and the rain of the previous evening was still with us. There were a few emails and phone calls checking where we were meeting. I decorated the cake and hoped for the rain to clear. Fortunately this cake is easy and could be done while Sylvia ate breakfast with E. I finished the cake, chopped the vegies and was packing the food in hope.

By then the rain was even heavier and it was too wet for the park. It was time to put Plan B into action and hold the party at home. No problem. Just a matter of tidying up and throwing all our clutter on our bed in 30 minutes and shutting the door. Gulp! 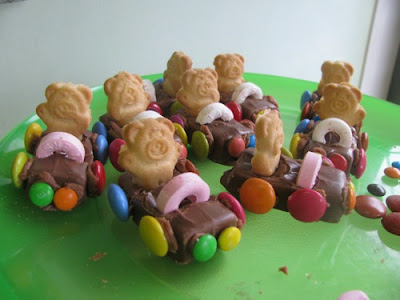 It was probably just as well we were at home because by the time people began to arrive I was still slowly making the Teddy Racers. I found the idea over at Dunn to Perfection. It seemed simple. Just squash some Arnotts Tiny Teddies into mini Milky Ways. Chop a Lifesaver in half and push in to make a steering wheel. Use a bit of icing to glue on Smarties for wheels and mini M&Ms for headlights.

It took a lot longer than I had expected. They are not a "recipe" to make while hosting a party. Or maybe not a "recipe" to attempt while watching a small child. Not even something that a 2 year old can help with. Too many temptations. At one stage I had to prise a Lifesaver out of Sylvia's mouth, because she had bitten into it in the packet and it was still in the wrapper.

Sylvia was fascinated by them. "Baw baw!" (That is how she says brm brmmm.) When her older cousins arrived they loved helping and I was asked quite a few times when we could eat them. My mum wanted to know if they could be made with tim tams. They disappeared as soon as I said go. Definitely a highlight! 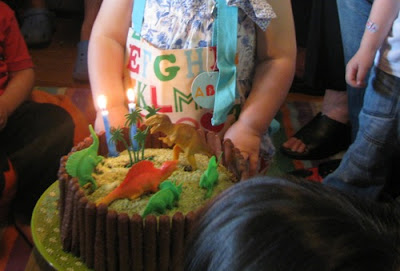 The cake was also a hit with the kids. I have made it before with farm animals as you can see here. Sylvia had chosen the packet of dinosaurs down the street (before lying on the ground and kicking her heels in the supermarket and then throwing dolly out of her stroller on the way home). I put it on a little coffee table so the kids could crowd around it to sing Happy Birthday. Some little fingers managed to push some of the fence over while waiting to sing but I am sure they were just in league with the dinosaur freedom fighters. Sylvia didn't want to blow out the candles so Cooper willingly helped out. 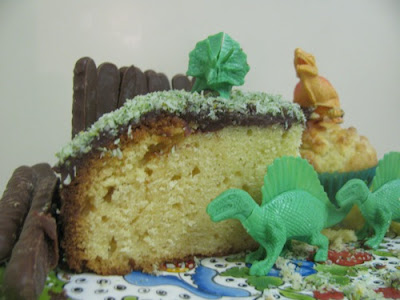 The actual white chocolate mud cake was a good dense cake that would be easy to carve up for novelty cakes and it was great for cutting into thin slices. It was buttery and sweet so E loved it. My niece Ella, who loves most of my cakes, was a little disappointed with it. I think she expected dark chocolate. Despite Ella's reservations, there wasn't much cake left by the time everyone left.

Sylvia had a lovely time. She was quite happy to run about with the kids and even gave her dolly to her little cousin, Baby A, to cuddle. Our friends were very generous with presents - cooking stuff, a cash register, clothes, books, jigsaws, toys. She has had lots of fun with them. 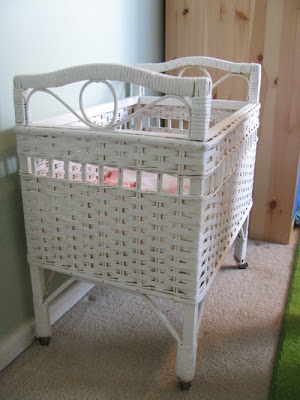 Above is a special present that she received from my mum and dad. When Sylvia was born she slept in the white cane cot that was made for my mum when she was a baby. This little dolls cot was made at the same time. Many little girls in my family have played with it before Sylvia. Including me. Apparently I put it too close to the fire and burnt the side. My mum repaired it then, just as she has recently given it a fresh coat of paint. Sylvia loves it. Dolly goes in and out often. Sylvia also likes to climb in (despite my remonstrations) but hasn't worked out how to get out.

The dragon at the top of the page was also a present. She calls him a dinosaur. I read her a book this week and she thought the elephants were dinosaurs. I was surprised as one of her favourite songs is Heidi Ho ("the great big elephant is so slow"). She can even sing this song. But I guess she has dinosaurs on the brain. No wonder she chose to have a dinosaur farm birthday cake.

For more about Sylvia's birthday you can read about her birthday pizza, banana berry birthday cake and lunch at Teatime & Tales.

Melt butter, white chocolate, sugar, milk and vanilla essence in a large heatproof bowl in the microwave (or a large saucepan on the stovetop over low heat) until mixture is smooth. Cool about 15 minutes. Stir in flours and then eggs until you have a smooth but quite runny batter.

Pour batter into prepared cake tin and bake for about 1 hour 40 minutes until cooked through. A skewer came out cleanly when inserted into the cake when I took it out. If the cake is browning too much before it is cooked, place some foil over it. Cool cake in the tin.

To make icing: I melted butter and chocolate, then added icing sugar and a few spoonfuls of hot water but it was so stiff that I added a little cream and then it seemed a bit runny but actually was just a lovely soft icing. In future I might melt butter, chocolate and cream together and then add icing sugar and no water.

To assemble: Turn cake out of the tin and place on a serving plate. Pour the icing over the top of the cake and use a butter knife to push it over the sides and smooth it around the sides of the cake. (As an aside, I find it odd the the AWW recipe calls for green icing because I think chocolate is more realistic to represent the dirt under the coconut grass.)

Place the chocolate sticks around the edge of the cake to resemble a log fence. The should be upright next to each other, with the smooth side facing inwards. If your farm or zoo set has a gate you can pile a few sticks horizontally with the gate on top but there was not gate for these dinosaurs.

Mix the coconut and green food colouring until the coconut is a nice green (I use my fingers to mix). Sprinkle coconut over the top. Arrange plastic animals (and a tree) in the green coconut grass paddock. It is good to keep a little coconut aside and if you need to change the placement of the animals you can sprinkle more coconut where the animal's hooves made imprints.

*Update: October 2013: I made a gluten free version of this cake for my dad's birthday party.  I doubled the cake and instead of using wheat flour I used 2 cups millet flour, 2/3 cup besan (chickpea flour), 2/3 cup arrowroot (tapioca flour), 2/3 cup potato starch (or cornflour), plus 2 tsp baking powder.  (Halve this if you want a gluten free cake the size in the above recipe.)  I used a roasting tin for the bigger cake and only baked it 1 hour and it wasn't cooked in the middle.  I also had it crack when turning out of the tin when warm - no wonder the recipe says to cool in the tin!

On the Stereo:
Love Songs (free CD from Mail on Sunday): Elvis Presley
Posted by Johanna GGG at 15:01