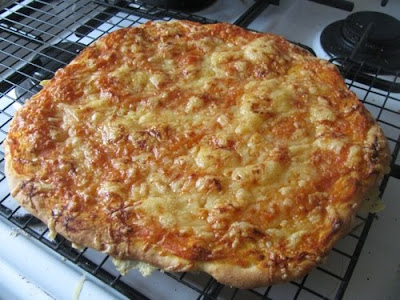 Making a birthday dinner for a 2 year old is a daunting task. One day she will gobble up something I never expected her to touch. Then the next day she will refuse to even eat her favourite chunks of tofu. I decided for Sylvia's birthday that I would make pizza. She loves it with tomato and cheese. The other challenge is that nothing happens quickly with a toddler. Before I know it, I am at the end of the day where I am trying to get her fed and to bed. 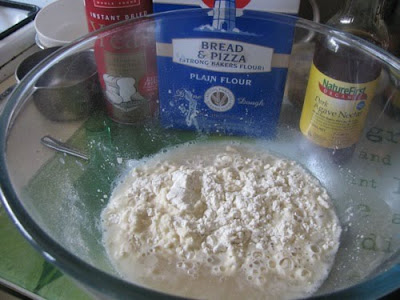 I had intended to make Isa's pizza base. It has worked well for me in the past. However, I was racing to get Sylvia's dinner together. I didn't have the luxury of letting pizza dough rise for over an hour.

I recently tried another pizza base I saw on Where's the Beef. It is similar to Katie's pronto pizza but doesn't have as much yeast per each cup of flour. Apparently, the recipe can be made in 15 minutes. I have too many distractions to ever get dinner made that quickly. What I was after was a dough that I could make like a conventional pizza dough with a few shortcuts. 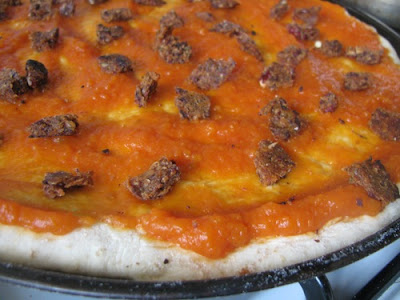 This pizza worked wonderfully. My yeast is now past the use by date. I find letting it rise a little at the start, with just a little flour to feed the yeast, is a good way to check that the yeast is alive. The recipe doesn't require any kneading or proofing but I figured that if I gave it a little it wouldn't hurt. Made me feel like I was making a proper pizza. But fast tracked!

I had intended to make a standard tomato sauce but I had baked a sweet potato for some chocolate cashew frosting. I decided that Sylvia would be more likely to eat pizza sauce than frosting. The sweet potato was put in the pasta sauce. Sylvia was under my feet taking tins of baked beans from the pantry to feed to dolly. It inspired me to put some leftover baked beans in the sauce too. 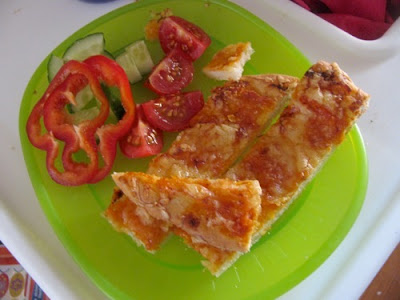 Sylvia couldn't get enough of her pizza. She even ate a leftover quarter the next day. I was pleased she got some extra vegies and protein in the sauce. I never intended to sneak vegetables into her meals. In fact there is very little chance because she eats her food so plain. But I do love any way I can get more nutrition into her diet, apart from vitamins in sugary sweet syrups. 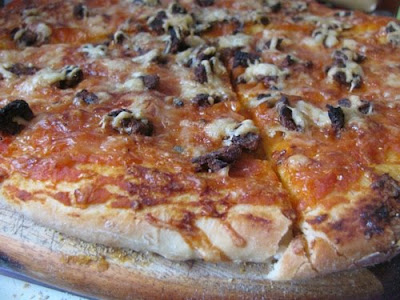 I had also planned to make a more fancy pizza for E and me but all I had energy for was a bit of extra facon on top of the sauce. With a bit of salad on the side, it was delicious. I will be making this again. It is flexible enough to fit with our lifestyle. 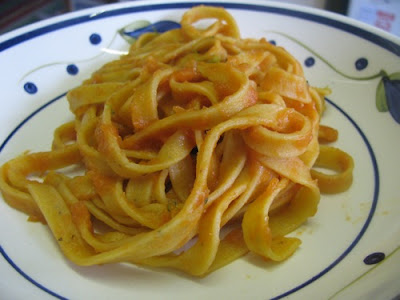 Lastly I must warn you that the sauce goes a long way. Not only did we also have it on Turkish bread pizza on the weekend but we also had it on pasta a couple of nights. I would have liked to have tried it in a pasta bake but life has not given much let-up lately. Meanwhile I hope to be back soon to tell you about Sylvia's birthday cakes.

Fast track pizza dough
Adapted from Everybody Likes Sandwiches via Lindy Loo and Cindy and Michael
Preheat oven to 220 with a pizza stone in the oven.

Place the yeast, warm water, agave or honey and 1/2 cup of flour in a large bowl. Leave to sit about 5-10 minutes. It should be frothy after this time. (If it is not then maybe either the yeast is too old or the water was too hot and you should start again.) Dole out berries, draw a cat and wipe a snotty nose.

Add remaining flour, salt and olive oil. Knead a few minutes until soft. Cover and leave for 20-60 minutes, depending on how long you have. Make pizza sauce. Push toddler around in her dolls pram. Dole out more berries.

Roll out dough as thinly as possible using a floured rolling pin and a floured board (ie the dough will be sticky and need some flour to stop it sticking to your hands and board and the rolling pin - use as much flour as you need). It makes 2-3 largish pizzas. I made 2 but could have made the dough go further if I had stretched the dough out a little more thinly.

Scatter cornmeal on a pizza tray and transfer dough to tray. Arrange toppings on top. Bake for 20-25 minutes or until toppings are golden brown.

On the stereo:
The Collection: Pentangle
Posted by Johanna GGG at 21:51