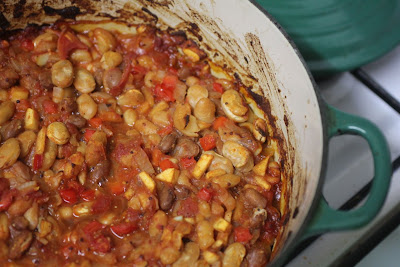 Cindy and Michael invited us to vegan brunch on Sunday morning.  I decided to make one of my favourite breakfast foods.  Baked beans on toast.  Saturday was a productive day.  I had baked sourdough bread, baked some doughnuts I had stored in the freezer, made lemonade.  Still to go was pizza, baked beans and no knead focaccia.  Then I found I was low on white flour and only had the wrong beans. 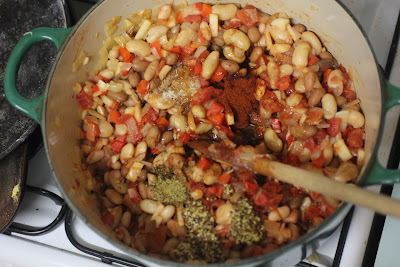 I could have winged it.  Scrapped together the other bits of flour I had and used brightly coloured beans.  But I tried the foccaccia with wholemeal once and it wasn't great.  And I am very traditional about baked beans being light coloured.  Black beans and kidney beans would have looked so wrong. 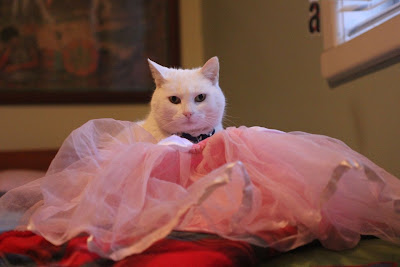 So I went to where Sylvia and E were doing a jigsaw and told them I was going out into the darkening wet evening for flour and beans.  They barely noticed.  Those two had worn every dress up and played every game they could find while I was baking.    (No photo of their hilarious outfits but here is Zinc with a princess gown to give you a smile.) 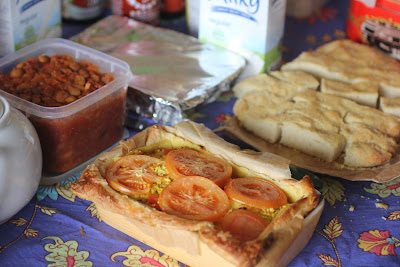 The next morning I baked the foccaccia and reheated the beans in the oven.  It was an easy preparation while we ate porridge and got ready.  One reason I took the bread was to make sure that Sylvia had something savoury to eat rather than just eat sweet food. 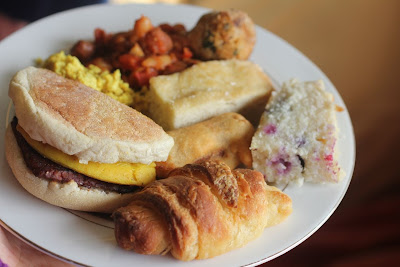 Yes beans on toast seemed rather humble beside the amazing food.  Michael's vegan egg McMuffins, Vicki's mini croissants, Craig's vegie sausages in batter, Bec's berry cornbread, AOF's soy balls, someone's scrambled tofu, Cindy's gingerbread waffles with fruit, and Craig's oreos in batter.  I am sure I have missed lots else but it was really good. 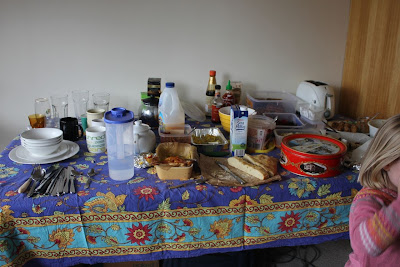 It was a relaxed brunch.  Yes there were kids and a deep fryer present.  And I got a waffle stuck in the toaster.  But there were bean bags and prosecco too.  It was great to catch up with old friends and put some faces to bloggers.  When Sylvia had been rascally enough, we left.  I gave Cindy some of the beans and took some home. 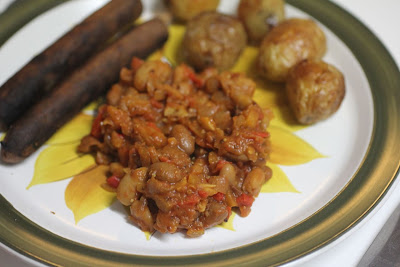 The beans seemed to just keep on going on.  We had them on Monday with sausages and roast potatoes.  (I even got Sylvia to eat a few.  That is a huge achievement!)  Yesterday I had them in a sandwich with hummus, grated carrot and avocado.  Today I made us sourdough flatbreads for lunch and had roast potato, avocado, hummus and beans on mine. 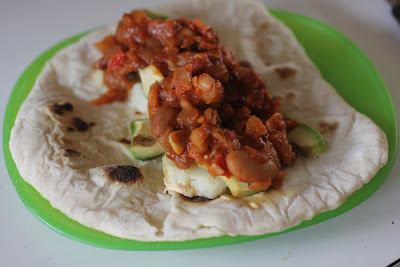 I really enjoyed these beans.  They were easy to make and had enough liquid to be forgiving of as much cooking time as we needed (or maybe that is just our oven which is incapable of burning anything).  I didn't understand Susan's listing of a "can of tomato sauce".  In Australia our tomato sauce is either ketchup or pasta sauce.  I just added diced tomatoes and some tomato paste instead.  I also found it quite sweet and added more salt than she did.  I used 2 tbsp golden syrup but 1 might be enough next time.  Thanks Cindy and Michael for prompting me to make a recipe that had been bookmarked.

I am sending this taco filling to Cooking with Siri for My Legume Love Affair (#62), the monthly event celebrating beans and lentils and legumes, overseen by Lisa of Lisa's Kitchen and founded by Susan of The Well Seasoned Cook.

Previously on Green Gourmet Giraffe:
One year ago: Wholemeal pretzels and Pea soup
Two years ago: A visit to Orange (the town not the fruit)
Three years ago: PPN Whimsical Mushroom and Rhubarb Soup
Four years ago: GYO Paradise banishes the Chutney Fear
Five years ago: My Vegetarian Lasagne
Six years ago: Bonza Baked Potatoes!

Fry onions for about 3 minutes in olive oil in a stockpot.  (I used my 25cm le creuset dutch oven which is suitable for stovetop and oven.)   Add red capsicum and fry an additional 3 minutes.  The onions and red capsicum should be quite soft by now.  Stir through garlic and apple for about a minute.  Add remaining ingredients and bake at 180 C for about 30 minutes covered and another 30 minutes uncovered.  Check seasoning and adjust to taste.

They were ready to serve hot out of the oven but I left them at room temperature overnight and then heated for another 30 minutes the next morning before taking them out.  Keeps a few days in the fridge.


On the Stereo:
Viva Hate: Morrissey