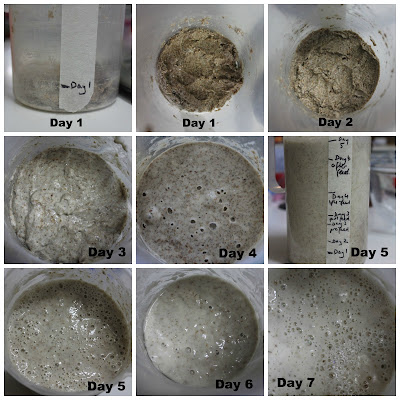 For a long time I have promised myself that one day I would make a sourdough starter.  A few weeks ago I finally did it.  Let me tell you I was nervous.  So much could go wrong.  It didn't.  After eight days I had a loaf of sourdough bread.  I am still no expert.  However, I want to reflect on the experience for me - and you if you are interested.

I am splitting my sourdough basics posts into three - making the starter, maintaining the starter and baking the bread.  Below is how I made my starter.  I followed Brydie's brilliant post  How to Make a Sourdough Starter at City Hippy Farm Girl.  In these posts, as a novice, I am including some basic information that might help me if I ever need to create a new starter. 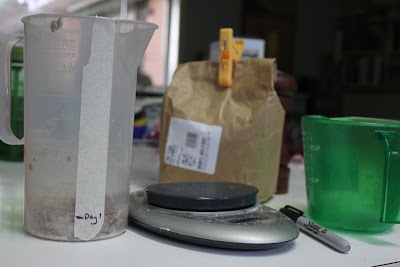 Before giving you a day by day description, I have a few notes that hopefully might answer some of the questions I had when I was starting out. 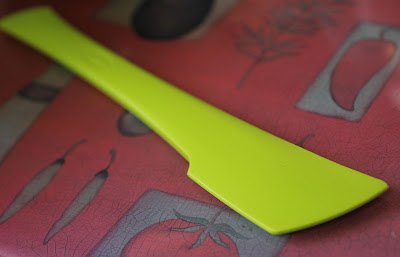 Notes:
Sourdough Starter - Day by Day
I found it really useful looking at others' photos of the development of their sourdough starter so I am sharing mine.  I got a bit confused about photographing and marking the level on the jug each day because it was different before and after each feed.  If I ever do this again I will do an update!  For now this is what I recorded on the fly. 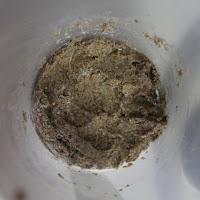 Day 1
Weigh your container and write it down somewhere.  I forgot to do this until much later.  (Mine weighed 85g.)

Mixed 50g rye flour and 50ml water.  (I found it hard to measure small amounts in a measuring container and used tablespoons and teaspoons but since then I have been finding it even easier to weight water as well as flour so I would probably use 50ml water if doing again.)  My starter was very stodgy and weighed 90g. 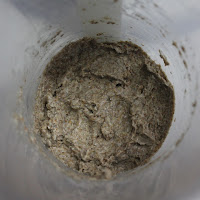 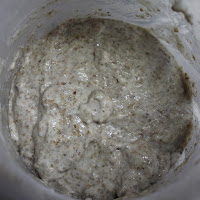 Day 3
Mixed in 100g white wheat flour and 100ml water.  Mine was still looking too dry so I added a spoonful or two of water to loosen it up.  This made it easier to stir.  The photo was taken after I refreshed or fed the starter (ie added flour and dough).  It was starting to smell a bit fruity, had risen quite a bit and was quite stringy to stir.  It weighed 435g. 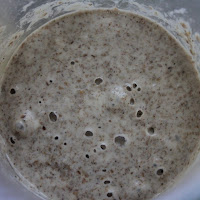 Day 4
Mixed in 200g white flour and 200ml water.  I finally remembered to photograph before feeding the starter.  It was starting to look bubbly and smelled quite strong and fruity.  In fact I found the smell overwhelming.  (I found it hard to judge as I had never smelled a sourdough starter before.)  E said I had made things that smelled far worse!  By now the gluten strings were really developing and it was too hard to stir with a spoon because it had grown so much (a spatula would have been better).  It weighed 800g. 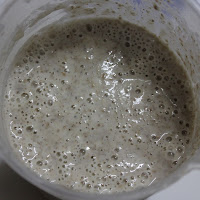 Day 5
By now it was quite bubbly and had grown.  I forgot to weigh before discarding (also referred to as the 'toss off'.  Don't google this without including 'sourdough' in the search or you will find some rather adult meanings to the term!) 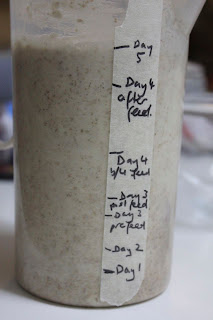 Take out as much starter as you need to reduce it to 100g.  Mix in 50g white flour and 50 ml water.  (The post-feed level is actually marked as Day 6 on the jug in the last photo I think.)  As for the amount you toss off, I used some of mine for pizza dough but it didn't have much of a rise to it.  As Susan says, it is Mine now weighed 194g. 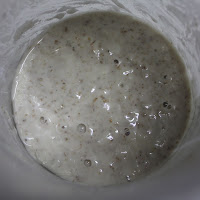 Day 6
The starter had lost some of its bubbliness after the toss off the previous day.  Nor did it rise much.  Fed the starter add 100g white flour, 100ml water.  (Marked Day 7 on the jug in the bottom photo.)  Smelled less strong but still fruity.  Weighed 412g. 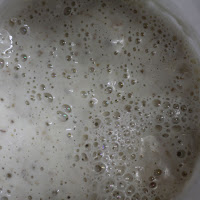 Day 7
The starter had risen quite a bit and was rather bubbly.  (See level marked Day 8 on jug in bottom photo.)  According to Brydie by now it was likely to be a mature starter ready to use.  Other people have said it might take up to 2 weeks to get your starter going.  I thought the bubbles were looking good it was time to think about maintenance and bake a loaf of bread. 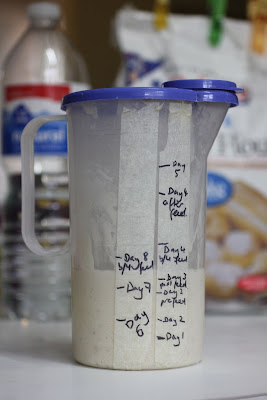 I had focused so much on making the starter that I hadn't given much thought to maintenance.  I will write more about this soon and about the loaves I have been baking.  It still feels very mysterious and magical and I am not at all sure I am doing it right but I am enjoying baking my own sourdough.  That's all the matters in the end!