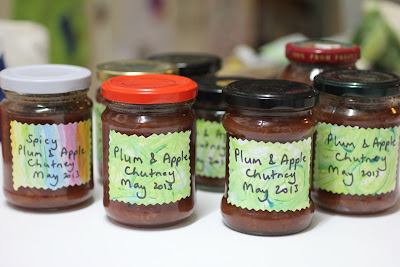 I love having a nice chutney around the house for burgers, pies and sandwiches.  So I was surprised to find that I hadn't blogged about a chutney since 2010.  I was also a little sad that when I finally got around to making chutney for the first time in ages I wasn't bowled over by it.  It was a little too sweet, too much star anise and not enough bite.  But it is growing on me.  By the end of the last jar I might even be sad to finish it. 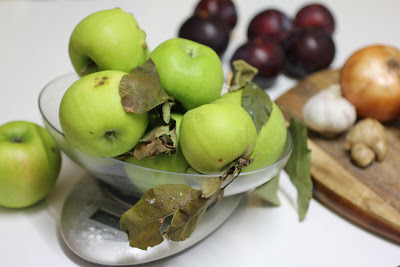 Before my mum and dad left for holiday some months ago, my mum noticed ripe apples on her apple tree.  She gave me a bagful.  When I think of my mum and apples, I have an image of her taking an apple off the tree, polishing it on her trousers until it shines (sort of like a cricketer polishes the cricket ball) and giving it to us for a bite.

The apples were a bit manky for eating so I decided to make chutney.  Since then Sylvia and I have discovered a love of stewed apples.  We eat them on porridge or just by the spoonful.  I have been buying cheap manky apples to stew.  But at the time, I felt the need for chutney.

I reduced the sugar by about a quarter.  It was still too sweet.  I resisted the urge to include mustard seeds but after trying the tomato chutney my mum brought home from Ireland, I regret that.  I have enjoyed star anise in a few meals but I am not so keen on it in this chutney.  I also boiled it longer than the recipe said because it just didn't look right.  Unfortunately I boiled it a little fast at the end and burnt the saucepan.

At least I got the sterilisation of the jars right.  I found it quite helpful to put them in a large roasting dish when I put them in the oven because it made them so easy to take out and fill while hot. 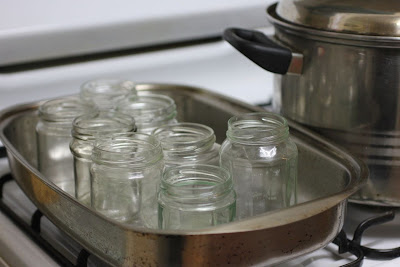 It was very satisfying to hear the lids popping as the cooling air drew the seals inwards.  It reassured me that they would be fine to sit in the cupboard for a few months as directed by the recipe.  Often I am too impatient and/or nervous to wait that long. 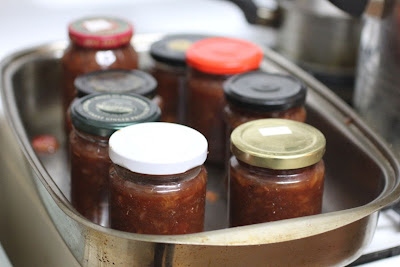 After all the waiting, I was excited about tasting the chutney.  It was ok but didn't grab me.  I made some chia bread and vegan cheddar cheese to celebrate.  It didn't quite work.  The cheese needed a more robust chutney.  More spice, less sugar. 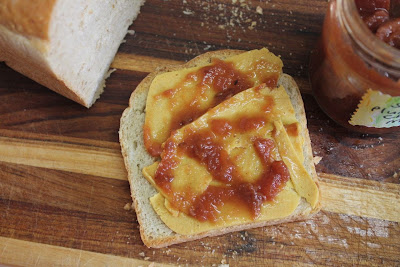 Then I bought a bitey blue cheese and the chutney still didn't work.  To be fair, I wasn't so keen on the blue cheese much either.  I have had more success using it with vegie sausages and with a vintage cheddar cheese. 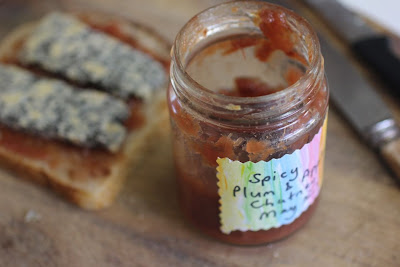 It is nice to have homemade chutney in the cupboard again.  Yet when I finish it, I think I will revert to some favourite flavours.

Peel and finely chop onions, garlic and ginger.  Chop apples and plums.  Place onions, garlic, ginger, apples, spices, vinegar and salt into a stockpot.  Cover, bring to the boil and simmer gently for 30 minutes on low heat.  Add plums and sugar.  Simmer another 40 minutes until thickened.  (Mine seemed more sauce than chutney at this stage so I boiled it for another 15 minutes until it looked like chutney.)

While chutney is boiling, prepare jars.  If you have a dishwasher you can put them through a cycle.  I don't have a dishwasher so I put mine into a big roasting tin (for ease of handling) and baked them for 30 minutes at 150 C.  I boiled the lids on the stovetop for 10 minutes.

Remove and discard star anise and cinnamon sticks.  Ladle the hot chutney into hot jars.  Put on lids while hot and they should depress as they cool.  I could heat the pop of the lids as they depressed.  This is a sign that they are sealed.  Cool.  Label (I used glue to stick on labels) and leave in a dark cool cupboard for at least 2 months.

On the Stereo:
The boy with the arab strip: Belle and Sebastian
Posted by Johanna GGG at 22:44