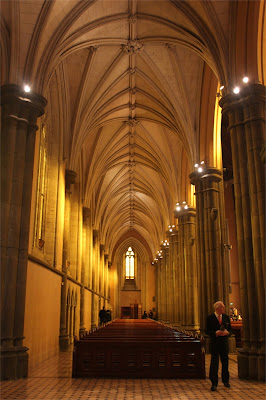 Open House Melbourne, held last weekend, is a chance to see our city through tourist eyes, to visit places we usually pass without a second thought and to marvel at the fascinating buildings throughout our fine city.  I have lived in and around Melbourne long enough to find myself full of nostalgia and pride.  This is a long post (with a green dal recipe at the end) so here is a summary of my day.

Open House Melbourne requires some planning.  I left home alone on Sunday with my water, comfy shoes, camera and a map of places to visit.  Despite much perusing of the Open House Melbourne website, I still managed to find my first destination was only open on Saturday. 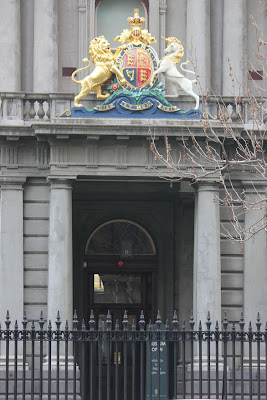 Hellenic Museum - former Royal Mint
All the buildings I visited this year tugged at my memories.  My first open building was the Hellenic Museum at the magnificent building that was formerly the Royal Mint on the corner of Williams and LaTrobe Streets.  It was opened in 1872.

While I have never been to the Hellenic Museum that tells the story of the Greek community in Melbourne, I vaguely remember visiting the Royal Mint as a child.  How amazing to go to a place where they made money!  I was more interested in the building than the museum.  However, I thought it a shame there was no space in the museum to explain the history of the Royal Mint. 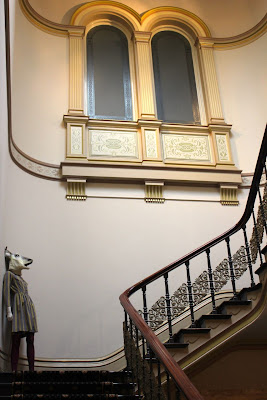 Hopefully one day I will have time to take in all the information in the museum, but on the day, I really enjoyed the exhibition, Between Worlds by Polexeni Papapetrou.  You can see one of the people with animal heads on the grand staircase above. 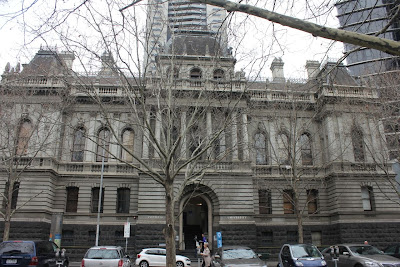 The facade and the grand stair case were most impressive.  I also liked the glass doors still etched with Births, Deaths and Marriages.  Truth be told, I was already later than I intended so I moved on quickly. 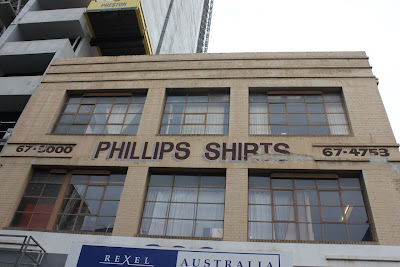 Phillips Shirt Factory
I love grand old buildings or little cottages that show how we lived at home.  The building I chose this year to challenge myself to see something different was the Phillips Shirt Factory in Little Lonsdale Street.  Though it is not as though I don't have an appreciation for industrial history.  I studied the industrial revolution at university and as a student I did an oral history project on a former knitting mill in country Victoria that my great grandfather ran. 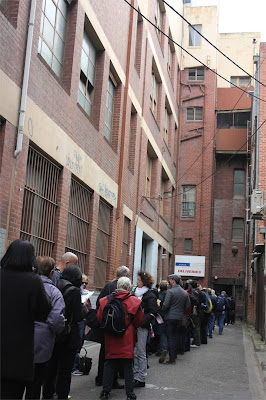 Having not initially been interested, I was slightly taken aback to find how popular it was.  I decided to join the queue and wait.  A couple ahead of me said they had been told it was one of the highlights so I felt hopeful.  People were quite friendly in the crowd.  I spent a lot of my time with an older lady who told me about how she worked in textiles and we looked about us at the warehouse and wondered if hadn't already been transformed into expensive accommodation like so much else in Melbourne CBD (Central Business District). 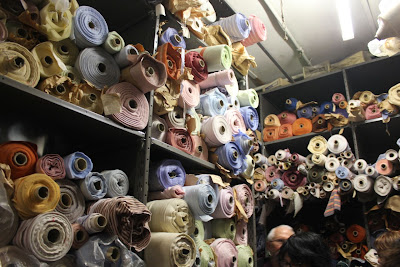 Finally we were taken up some very worn wooden stairs to the factory floor.  The first room on display was the fabric room.  It had hundreds of rolls of material, some with their original tags still attached.  Apparently this room is in demand whenever there is a musical or television show where some vintage fabric is required.

We wandered about with our cameras and curiosity.  I wondered out loud if it would be a good scene for a murder.  Obviously I watch too many detective shows on the telly.  One woman mentioned she would not stand too close to me and I am sure others thought it.  (Well, how else could I get some space to take photos!)  It was such a fascinating place that I was sad to have to leave all too soon to make way for other tour groups. 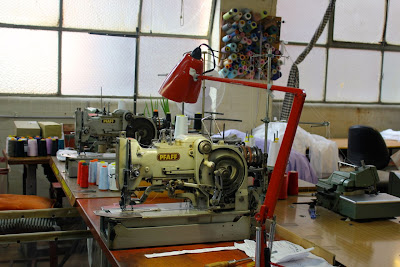 If the fabric room was perfect for a gruesome murder, the factory floor would make a great place for a chase scene.  Part of the fascination with the place was that it is still a working factory.  The irons are heavy, the sewing machines look really complicated and the machine used to make the point in a collar looks really viscous. 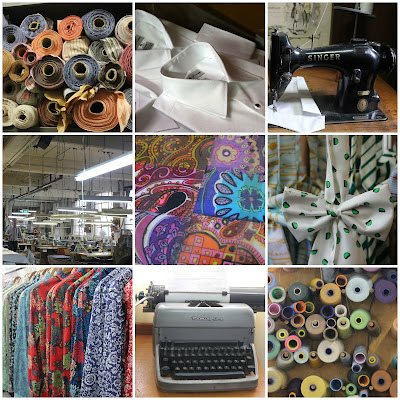 The woman taking us on the tour looked very Mad Men in her faux fur jacket and high heels.  She told us a little of the history of the company that was started in the 1950s by a couple of Czech immigrants.  Apparently there are no inventories of the historic material.  She told us of piles of boxes with unknown contents.  Sometimes they open a few just to see what are in them. 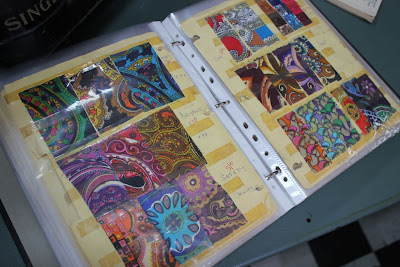 In the last room there was a combination of garments to purchase and archival material to admire.  Which sums up the company nicely.  It is interesting to hear how they are positioning themselves to be a successful business at a time when so much Australian manufacturing is going offshore.  They market both their vintage materials and their made to measure shirts. 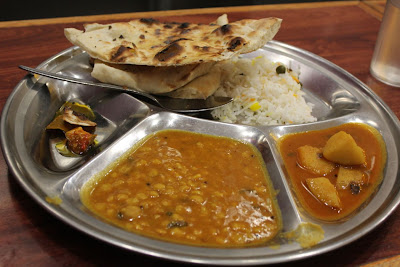 Om Vegetarian
I saw Veganopoulous' post on Open House Melbourne the night before I headed out.  She had lunch at Om Vegetarian.  It reminded me that I had been meaning to try it so I went there too (Shop 4, 227 Collins St).  I was pleased with the recommendation.  The all-you-can-eat lunch for $6.50 comprised excellent value.  The plate held a dal, a potato curry, rice, naan and pickle.  Nothing fancy but it was good tucker!  It was a great way to fill myself up and keep myself going with all the walking. 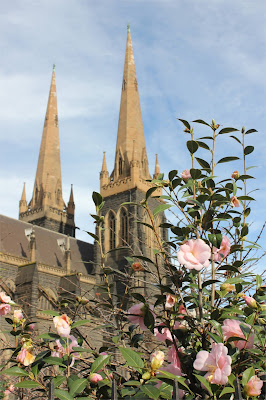 St Patrick's Cathedral
My next destination was the East end of the city.  My map got a bit vague and so I headed to the most familiar landmark, St Patrick's Cathedral.  After all, they do build churches on hills to make them easy to find.  I wondered if it was worth going here.  I remember attending church here as a child, but after visiting European churches I can find Aussie churches a wee bit plain.  I had forgotten that this is truly high church pomp and ceremony. 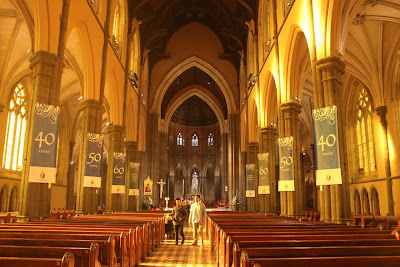 Upon entering I found the side windows rather plain.  Then I noticed that the yellow panes flooded the cathedral with golden light.  It was truly beautiful.  And to be fair, the cathedral does have its fair share of intricate stained glass windows.  In another life I was a volunteer guide at St Giles Cathedral in Edinburgh and was able to tell visitors all about the stories in the stained glass windows there.  I wished for a guide to tell me about these windows. 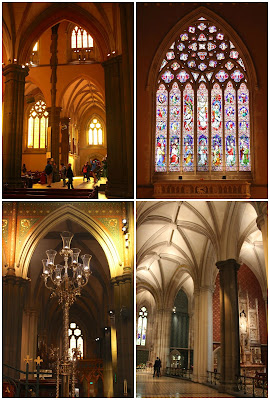 Instead I joined the photographers in snapping pictures of the soaring arches and rich details.  Behind the altar are some magnificent chapels with statues, wrought iron and marblework.  Beside the altar is a huge organ.  It is all on a grand scale that intends to make us feel small and humble.  Nothing feels modern about this nineteenth century masterpiece.  Only the friendliness of the church warden wandering among the visitors and chatting to us about our photos. 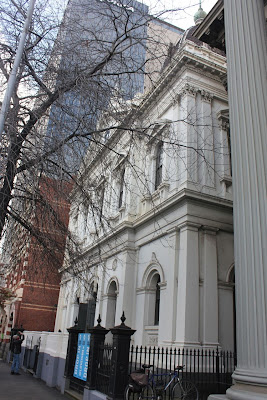 East Melbourne Synagogue
My next and final destination was The East Melbourne Synagogue just down Albert Street from St Pat's.  After the grand cathedral, this was a much smaller and intimate place of worship.  A small crowd was gathered around the rabbi.  He was answering questions about worship at the synagogue and struck me as friendly and welcoming. 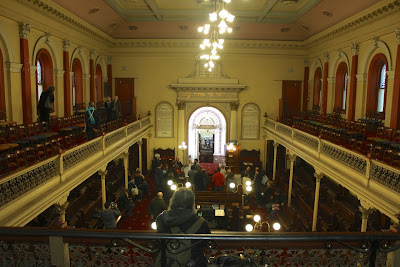 I went upstairs to enjoy the view from the upper galleries.  I got talking with a volunteer from the synagogue.  We looked at old books in Hebrew.  I find the script beautiful to look at.  I even learnt it for a short while.  Sadly I don't pick up new languages easily.  I talked to her about living on kibbutz in Israel.  She said that she had family living on kibbutz and that the children don't go to synagogue.  Suddenly I found it odd that I had lived on kibbutz and yet I had never been in a synagogue before. 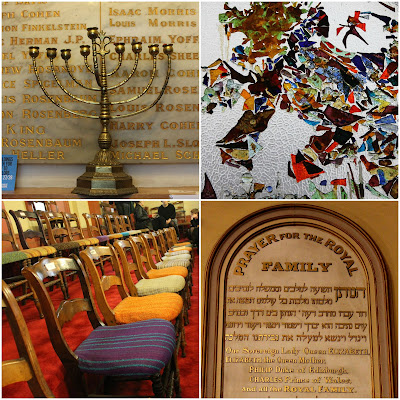 I enjoyed some of the small details in the synagogue.  The modern glass artwork was done in the 1970s and now protected by heritage legislation.  I am not sure if the same could be said of the old 1960s/1970s covers on the chair upstairs in the women's gallery.  Possibly the strangest sight was the prayer for the Royal family.  I even had to go up close and check it was the British Royal family because it just doesn't seem part of the Jewish heritage. 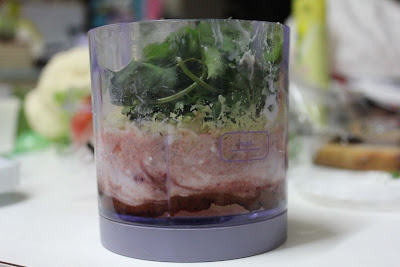 Then it was too late to see anywhere else.  If only I had been more organised I could have seen another building or two but I had probably seen enough.  Instead I made my way to the supermarket in Melbourne Central before catching the train.  On the train I was busy checking ideas for a green lentil dal and almost didn't notice that its destination had mysteriously changed.  Luckily I changed trains before I ended up in Watergardens! 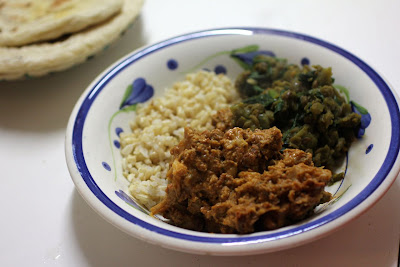 I went home and made a Cauliflower Tikka Masala that I had seen Mel make on Veganise This!  It was very spicy but deliciously creamy and full of interesting flavours.  My beetroot powder might be old as it wasn't as vibrant as Mel's and my oven let me down yet again and took ages to roast the cauliflower.  I followed Mel's recipe fairly closely, just using cashew butter instead of raw cashews and cardomom seeds instead of pods, so I am not reproducing the recipe here but highly recommend it. 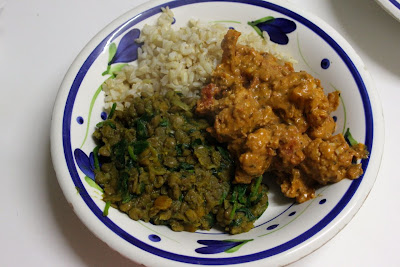 I planned to serve it with dal but on the way home I remembered I was out of red lentils.  I did have green lentils so I searched the web and got some ideas on the way home.  The dal I made was fairly plain and simple because most of my energies went into the tikka masala.  I am writing what I did here as I was a bit unsure how to make dal with green lentils and was pleased this worked.

I am sending this green lentil dal to Ricki for Wellness Weekends.

You can also read about my 2012 Open House Melbourne visits.

Green lentil dal
An original recipe
serves 4 as side dish

Heat vegetable oil in a large saucepan over medium heat.  Fry mustard seeds, cumin seeds and onion until onion is translucent and seeds have popped.  Stir in garlic clove and carrot for one minute.  Add lentils, water, salt and turmeric.  Gently simmer for about 1 hour or until lentils are soft and dal thickens.  Stir in spinach leaves for a minute or two until they wilt.