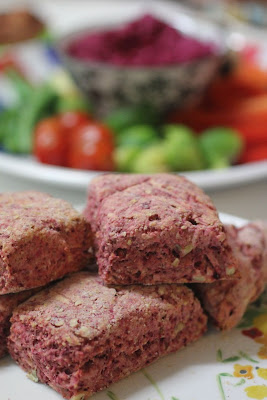 When Celia announced international scone week this week, I knew exactly which recipe I wanted to make.  As so often happens I got distracted.  Fortunately when I roasted some beetroot for beetroot hummus, I remembered to set one aside for Simone's lovely Beetroot, Apple and Pistachio scones.  Only I had decided to use walnuts instead of pistachio. 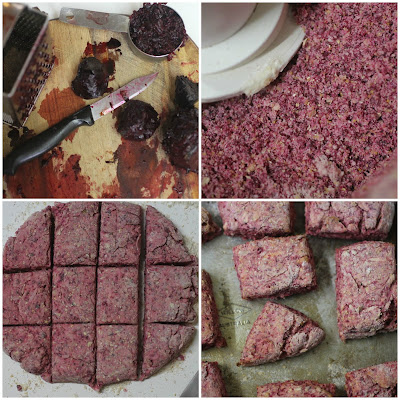 Mine were slightly less marbled than Simone's scones.  I even wondered if it would be better to stir in the beetroot after doing the food processor.  Maybe.  The scones looked very pink.  Until they were opened and were revealed to be a bit brown on the inside.  I opted not to add sugar.  The scones needed it.  I was wrong when I thought my soy milk and the veg and fruit and would sweet enough.  The beetroot and apple make them soft but their flavours get a little lost.  The walnuts are more noticeable in a subtle way. 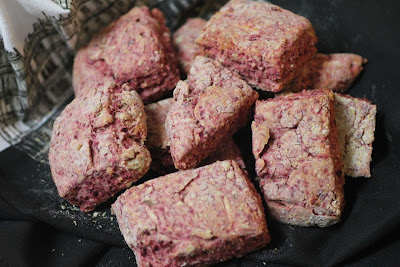 If you look closely you might see that these are the sort of scones that you can wrap in your Downton Abbey tea towel.   I also found them great with vegemite and beetroot hummus.  I suspect that would be frowned upon by Mr Carson of Downton.  He does like to uphold all traditions.  (We finished watching Series 3 on DVD this week.  Even traditions can't keep tragedy from the door!)  And I was grateful to the scones for using up an apple that had been half eaten by Sylvia.

It is not too late to bake some scones and send them to Celia.  Happy international scone week everyone!

Lightly grease a baking tray.  Preheat oven to 190 C (I preheated mine to 210 C because it is slow.)

Mix butter, dry ingredients and beetroot in a food processor until it resembles coarse breadcrumbs (or rub butter into ingredients with your fingers)  Transfer to a mixing bowl.  Stir in the apple and walnuts.  Then gently stir in milk until you have a sticky dough.

Lightly knead for a minute on a floured surface until you have a smooth dough.  Pat out to a square of about 1/2 inch thick on a floured surface.  Cut into four (or three) strips horizontally and then four strips vertically to make 12 or 16 square scones.

Place on a baking sheet and bake for 15 to 20 minutes or until lightly browned.  (Check bottoms to see if golden brown to confirm they are cooked).  Wrap scones in a teatowel to keep soft.  Best eaten on day of baking.

On the Stereo:
The End of the Rainbow: An Introduction to Richard and Linda Thompson
Posted by Johanna GGG at 22:39