Golden Syrup Dumplings and a confession 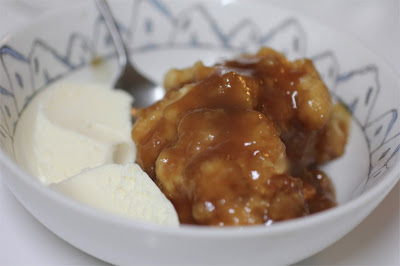 There was great excitement in our house a few days ago when I decided to make golden syrup dumplings for dessert.  I don't make proper dessert very often.  Sylvia was up on a chair begging to help with stirring.  She oohed and aahed at the golden syrup and tried to get a fingerful despite my stern words.  E just loves anything caramel, especially if there is no chocolate or fruit involved.  And everyone loves comforting dumplings on a cold wet evening. 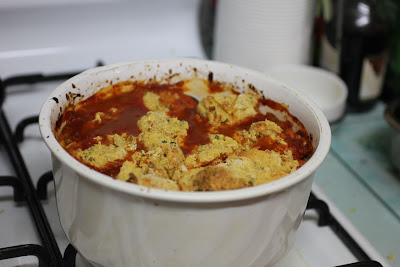 So let me deviate from my recipe and make a confession about one of my favourite dumpling dishes.  I love making Mexicale Pie with Cornmeal Dumplings.  It is a recipe that I found soon after I went vegetarian twenty-odd years ago.  I posted about it on my blog soon after I started this blog about 6 years ago.  I still make it regularly.

It is a mystery and an embarrassment that it has taken me until last week to find that I had written 'plain flour' rather than 'self raising flour' in the blog version of the recipe.  I have now added baking powder to the recipe (which will turn plain flour into self raising flour).  I just hope there haven't been many people making horrid unleavened dumplings like the ones I made last week.  If you have, I apologise.  (But I suspect anyone who tried that recipe may never have returned to my blog.) 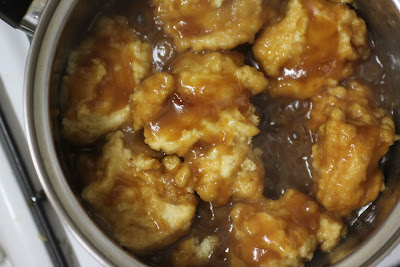 Fortunately the golden syrup dumplings were far more successful.  I combined the simple recipe from Kate at No Meat and Three Veg and the richer recipe from the Australian Women's Weekly's Old Fashioned Favourites.  It was very very sweet.  E and I loved them.  Sylvia loved cooking them more than eating them.

Next time I might scale back some of the sugar, as Kate did (and as I suspect is more old-fashioned) and even try a little lemon in the sauce as I have seen a few recipes do.  I also made the mistake of serving it with vanilla ice cream that was too sweet for the dumplings.  Regular cream would be preferable.  (I would just eat it without cream or ice cream but E would not.)  I also quite like my friend Will's way of baking the dumplings with a lump of chocolate in them.  Another time. 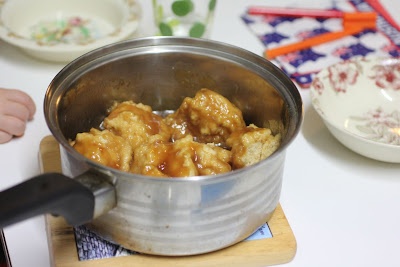 I have wanted to make golden syrup dumplings for a long time.  It is a dessert that I ate as a child.  A good old fashioned recipe.  Kate rolled hers into neat balls but I love the cloudy shapes that the dumplings make when dropped into the syrup.  They were more caramelly than I remember, possibly because I used brown sugar.  No complaints.

I am sure I will make them again.  The recipe is quick and simple, using only store cupboard ingredients.  Not at all fancy.  Exactly the sort of desserts I ate in my childhood.  I was sure it is the sort of thing to be made throughout Australia's history but there is very little online or in my history cookbooks.  Nevertheless eating golden syrup dumplings feels like your grandmother wrapping a warm blanket around you.  Just the sort of comfort food we need over winter.

I am sending this to Janice of Farmersgirl Kitchen for this month's Credit Crunch Munch. This is an event founded by Helen of Fuss Free Flavours and Camilla Fab Food for All that promotes frugal recipes. This recipes is frugal because it provides a delicious dessert without any fancy or expensive ingredients.

Rub butter into flour in a medium bowl.  Stir in milk and golden syrup to make a soft dough.

Put all ingredients for the sauce into a medium saucepan and bring to the boil.  Reduce to a simmer and gently drop spoonfuls of dumpling mixture into the saucepan.  You should have about 8 dumplings.

Cover and simmer for about 15 minutes.  Turn over about once or twice to make sure all dumplings are covered with sauce.  Use a spoon to take a small piece of dumpling to test they are cooked.  The sauce should have thickened up.

Serve dumplings with sauce spooned over them.  Serve cream on the side if desired.

On the stereo:
Super Trouper: ABBA
Posted by Johanna GGG at 21:27