Rhubarb and raspberry no knead focaccia and nature craft 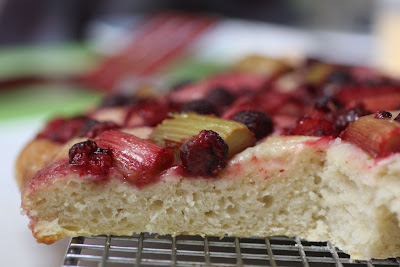 It was a slow weekend.  E was poorly so we didn't get out much.  Some time at the park, a walk to find nature stuff for craft, a supermarket shopping trip.  A perfect weekend for slow bread.  Especially when there was no bread in the house.  I remembered this rhubarb and raspberry focaccia that Lucy made last year. It was delicious. 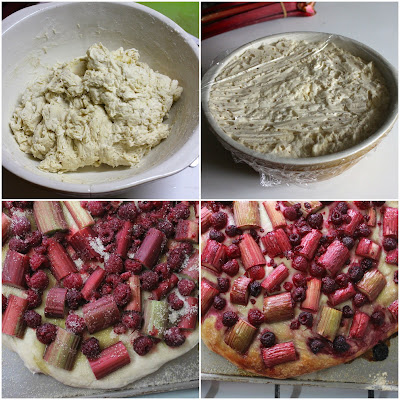 This is a no knead focaccia.  The ingredients are stirred together the night before and left to rise.  As you can see in the above photo, my dough rose as high as the clingwrap would allow.  Then we pressed in rhubarb and frozen raspberries and sprinkled with olive oil and sugar.

It was all fairly easy.  We are not an early rising family.  This was finally out of the oven and ready to eat at about 10.  I used to be the sort of person who had to eat as soon as I had risen and showered.  These days with a 4 year old around, it is no longer all about me and I sometimes find myself pottering about with Sylvia before breakfast. 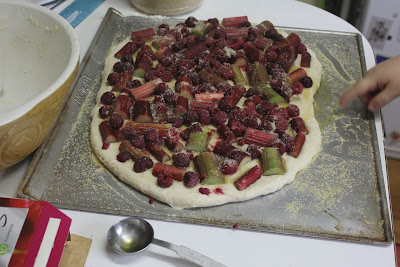 The bread was soft inside, juicy, sticky and sweet on top, and crisp around the edges.  I loved it.  The rhubarb was cooked but quite tart.  I tried slices of bread with cheese, cashew butter, peanut butter, honey, and chocolate spread.  I think the cheese was the least successful topping.  It was wonderful without topping too.

Sylvia preferred to pick the rhubarb off but said, "can you make this bread again, it's too yummy".  Maybe her delight every time she tasted crystals of sugar on top was the reason.  E found it had too much fruit for him and the lack of any sweetener in the dough didn't enthuse him either. 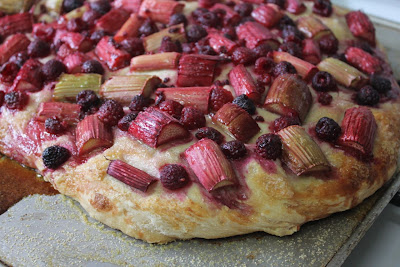 I would definitely make this bread again.  It would be brilliant for entertaining at a lunch or brunch or even to take along to a potluck or family meal.  I am quite keen to try it as a savoury bread.  Probably with onion, olives and sun dried tomatoes and maybe cheese.  If I tried it as a sweet bread again, I think I might like to try plums instead of rhubarb.  It would be brilliant for Mothers Day next weekend. 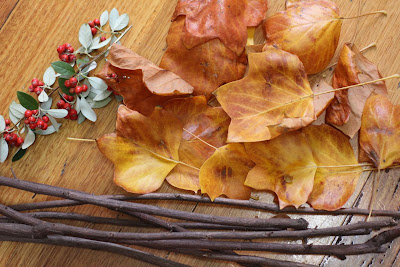 As well as focaccia, we made pancakes, limeade and pumpkin soup.  Sylvia and I spent time in the back garden admiring the camelia flowers, and went on a walk to forage for goodies for craft.  Afterwards I realised that she had her cardigan on inside out and I had my old cardigan with the moth eaten holes.  If anyone had seen us reaching up for golden leaves off an autumn tree in our street, we may have looked like vagabonds.  We wouldn't have cared.  It was fun.  (Much better than the times in the weekend involving spilled milk and fingers caught in a car door!) 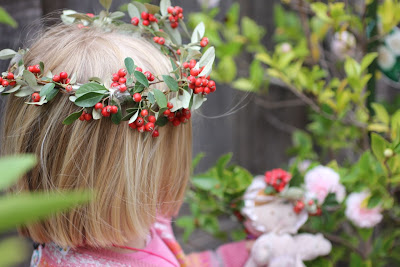 I thought it would be fun to make an autumn leaf crown. Sylvia decided she (and Dolly) wanted a berry and leaf crown.  Whenever she seems berries on trees around us she decides they are holly.  The berries weren't holly.  They did make a sweet crown with a bit of twisting and sticky tape.  (They are now hanging on our door as an autumnal wreath!)  I did make the autumn crown but Sylvia wasn't interested.  (I made holes in each leaf to thread the stem into and secured these with sticky tape.) 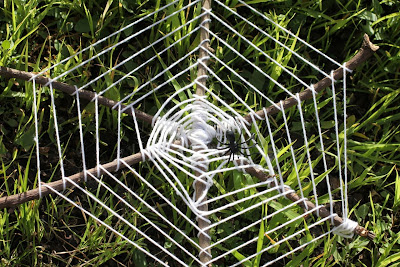 Sylvia also wasn't so interested in the twig and wool spider web.  That didn't stop me putting it together for her.  We found the idea at MollyMoo where there was also a spider made of pipecleaners.  We already had a plastic spider hanging around the house that Sylvia's cousin Gabriel gave her in Scotland.  (He has so many of these he wouldn't miss a few and his mother would love to see them all gone!) 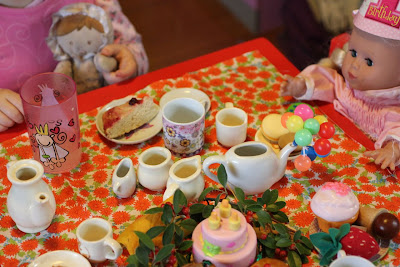 Finally Sylvia decided she wanted to have a tea party with her dollies.  According to this article in the Age newspaper, "Celebrating superheroes like Wonder Woman ... provide children with a richer fantasy world than tiaras and tea parties can alone."  Goodness we loved playing Wonder Woman as kids.  But surely the writer would approve of tea parties where there is home made focaccia to eat and foraged decorations.

I wish I could say E is better but he is still poorly.  Sylvia has now come down with a chest infection and I am lacking sleep after she had a restless night.  Our internet connection is still as slow as a wet week.  Touchwood that by next week we will all feel better and the internet will be restored to its usual speed.

I am sending this focaccia to Susan for YeastSpotting.

Start the night before you want to eat it or at least 8 - 10 hours before you want to eat focaccia.  Take a large mixing bowl.  Place yeast into warm water and leave for about 5 minutes until you see the yeast is active (it should foam or bloom slightly).  Stir in oil, flour and salt to make a soft dough.  Note that I had to stir quite a bit to incorporate all the flour.  Cover with clingwrap and leave overnight or about 8 hours.  I left mine at room temperature.

In the morning, prepare the fruit and sprinkle a large baking tray with polenta.  Preheat the oven to 200 C (I did 220 C which worked for my slow oven.)  Carefully take the risen dough from the bowl - it is fairly sturdy but I needed a bit of flour on my hands for some slight stickiness - and place on a lightly floured surface. Pat it out in an oval shape about 35 x 25 cm.  Use a little flour if needed.  Carefully transfer to the prepared baking tray.  Scatter with rhubarb and raspberries and press lightly into the dough.  Drizzle with olive oil and sprinkle the sugar on top.

Bake for 40 minutes until the fruit juices are running free and the sides are golden brown.  Eat hot or cool on a wire rack.

On the stereo:
London 0 Hull 4 - The Housemartins
Posted by Johanna GGG at 20:44