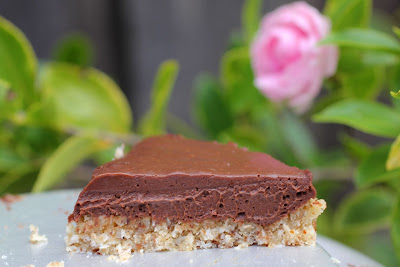 So this year I lacked the energy for a fancy pants novelty cake for E's birthday.  Yet baking a Victoria Sponge Cake for a family lunch presented very little challenge or difficulty.  I had a little energy over.  And there was no chocolate offering.  I decided it was a birthday.  I could be indulgent.  I even kidded myself that it would cater for the celiacs.  But really I was just making a chocolate tart that I had wanted to make for ages and ages.  It was every bit as good as Pinterest promised. 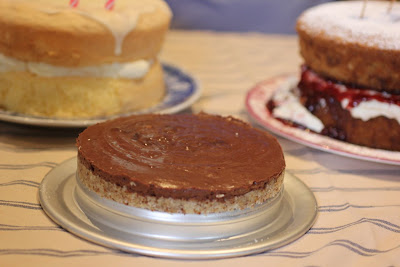 It is not a difficult tart to make.  I decided to make it that morning and used what was in my kitchen.  It involves a little melting, a little blending.  Press, stir and allow a little time in the fridge or freezer and there you have it.  I was a little nervous at taking it in the car to Geelong.  I put it in the freezer before I left so it kept its shape.

I used my new 6 inch springform tin.  We always have lots of food at family gatherings so I thought it best to keep it small.  The tin has rather a large lip around the base.  This looked rather odd with such a flat tart.  I suspect I would have been better off to carefully transfer it to a plate.  As I have said before, presentation is not my forte. 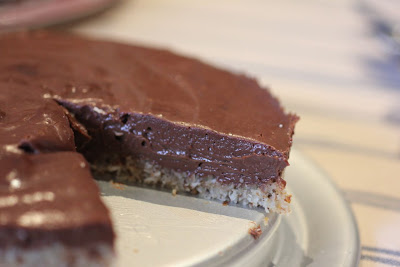 The base started as a Martha Stewart coconut base.  Then I found the coconut and butter had to be baked.  I had no time for cooling it down.  So I winged it and added a bit of almond and a bit of sweetener.

The filling was from Chocolate Covered Katie.  It was mainly melted chocolate and silken tofu.  I enjoyed the base but the filling was divine.  It was so silky soft that it melted in the mouth. 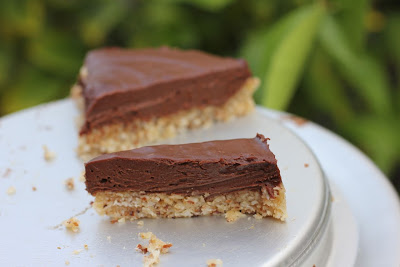 What did everyone else think?  Andy thought the base needed to be crispier, possibly baked.  My mum, Susie and E all thought it was rather rich and would be nice with a dollop of cream.  My niece Quin agreed with me that it was perfect just as it was.  (Obviously she has good taste!)

Despite being rather rich, it was lighter than a traditional dairy based ganache filling.  I'd like to experiment with the Martha Stewart crispy coconut base or even Janet's raw date-nut-cocoa base.  Actually I'd love any excuse to make this again.  It really was amazing.

I am sending this to Ricki for her weekly Wellness Weekends event, and wishing her good health.  Also a big thank you to Cass for the Best Moments Award (will write more about this later).

To make the base, melt margarine in a small heatproof bowl in the microwave (or in a small saucepan on the stovetop).  Mix in remaining ingredients.  Press into the base of a round 6 inch springform tin.  (I don't think I bothered to grease it.)

Melt the chocolate.  You can now blend it with the rest of the ingredients in a food processor or blender.  But I chose to blend the tofu, coconut milk, cocoa, vanilla and salt in my little attachment for my hand held blender and then to stir this into a small bowl of melted chocolate.  Pour filling into springform tin on top of the filling.

Chill the tart to firm it up.  I set mine in the freezer for an hour or two because I wanted to take it in the car.  After that it was kept in the fridge because it became quite soft when out of the fridge for a while.  When soft it is delicious to eat but difficult to cut.

On the Stereo:
The Amber Gathers: Alasdair Roberts
Posted by Johanna GGG at 17:51