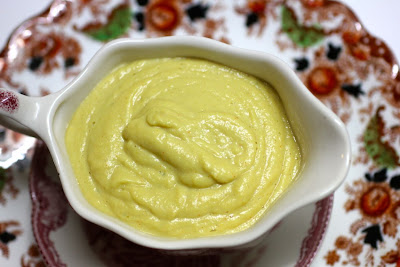 I was not alone when I was excited by Susan's amazing cauliflower cheese sauce on Fat Free Vegan recently.   You only have to look at the comments to know that others were similarly intrigued by her lowfat vegan cheese sauce using blended cauliflower for the base.  I am pleased to report that it is brilliant.  Deliciously creamy and virtuously light.  In fact it was so good that my plans to bake enchiladas were abandoned in favour of a simpler burrito meal that featured this sauce. 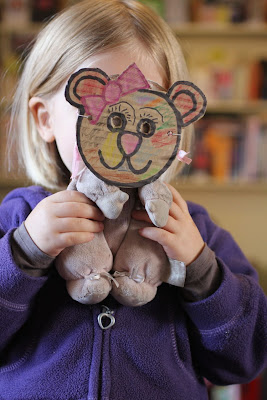 As you might have seen in a recent post, we have been eating a lot of cauliflower lately.  I bought a white cauliflower for the sauce and then I found a purple one in Lygon Street.  We had just been to storytime at the library and then played at the park.  I don't have any photos of the huge autumn leaves collected for the kids to stick on a collage so I have a photo instead of dolly in her teddy bear's picnic mask today. 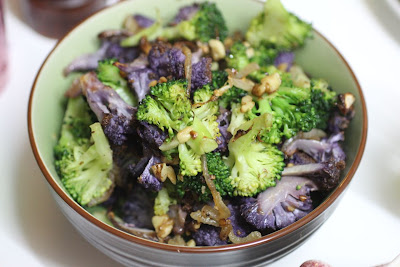 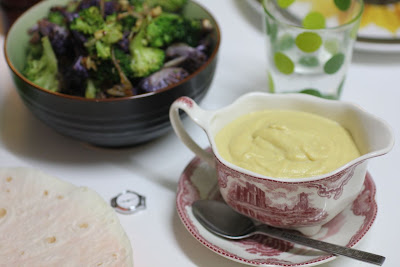 I didn't quite follow Susan's recipe.  For a start, I made this in the microwave and blended it with a hand held blender.  I added some soy milk and - after discovering the dregs of a packet of white miso were a bit crusty - I used tahini.  It was amazing.  And so ridiculously easy.  And healthy.  So I stopped there. 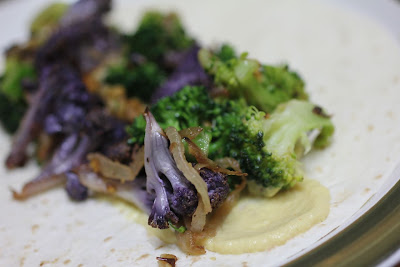 I realised dinner could be so much earlier and simpler.  I microwaved some broccoli to add to the onion and cauliflower and the I threw in some walnuts. The warm tortilla was spread thickly with cheese sauce, piled with vegies and then wrapped into a burrito.  It was delicious.  Not quite Mexican but inspired all the same. 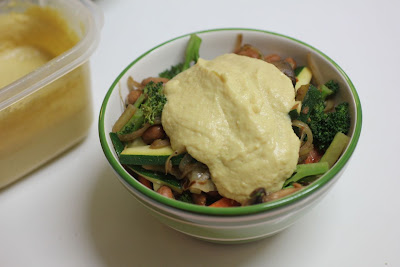 The next night I cooked brown rice, fried onions, microwaved vegies and topped them with cheese sauce.  Again the cheese sauce made a simple meal taste delicious.  Honestly, the cheese sauce was so good I wanted to just eat it by the spoonful.  (Having said that I think it was best on the first night.)  I still had some left and used the last of it in a lazy lunch.  I made some Heinz tomato sauce and addded besan, brown rice and cheese sauce. 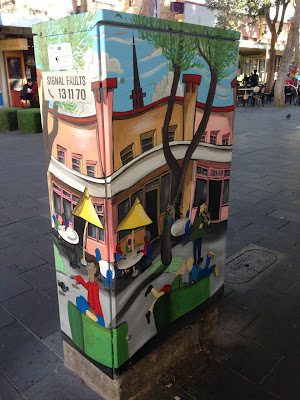 I will definitely be making this sauce again.  I am just wondering if I am brave enough to make a purple sauce if I find a purple cauliflower again.  I love a bit of colour in my life but even I find the idea of purple sauce a bit confronting (albeit exciting).  But I can share some local colour with you.  Above is a photo of a newly painted signal faults box in Victoria Street mall in Coburg.  We sat eating our lunch yesterday watching the artist working on it.  Today we were excited to see it was finished.

I am sending this cauliflower cheese sauce to Ricki's Wellness Weekends.

Previously on Green Gourmet Giraffe:
One year ago: In my Kitchen: May 2012
Two years ago: CC Moody Blues - the juice and the colour
Three years ago: GF Peanut Butter & Choc Chip Cookies
Four years ago: Preserved Lemon Stews and Intuition
Five years ago: Baked Bean Soup

Mix cauliflower, broccoli, onion and walnuts.  Warm tortillas and cheese sauce.  Spread cheese sauce down the middle of the tortilla.  Pile vegie mixture on top of the cheese sauce.  Roll up tortilla into a burrito.

Microwave the water, cauliflower, onion powder, garlic, smoked paprika, mustard and turmeric in a largish microwave tub until the cauliflower is cooked so well that it is falling apart at the touch of a fork.  (I don't remember how long this took but I guess between 2 and 5 minutes - if unsure microwave for a minute at a time until done.)  Add remaining ingredients and blend with a hand held blender.  Microwave until thickened.  This took me about 3 minutes, stirring well after each minute (don't worry if there is a slight hardened 'crust' at the edge, just stir it in).  Our cheese sauce kept for a few days and was reheated in the microwave when required.
On the stereo:
The Crook of My Arm: Alasdair Roberts
Posted by Johanna GGG at 20:28