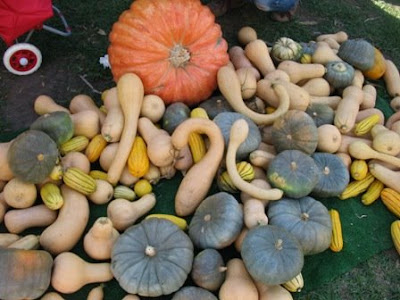 When my sister Francesca lived in London in the mid-1990s, we asked for requests for foods from home (Melbourne) when a friend was visiting her. Among other things, she asked for a tin of pumpkin soup because it was so hard to find. I was astounded. Surely pumpkin soup was an everyday food!

Later, when I lived in the UK I learnt that while pumpkin is like mother’s milk to an Australian, it is pig feed in the UK. Pumpkin soup in Australian cafes is often jazzed up with exotic spices but in the UK the very idea of pumpkin soup seems exotic.

Indeed in Europe pumpkins were a curiosity when brought back from the Americas in the 1500s. Perhaps this is why they features in fairy tales (Cinderella) and nursery rhymes (Peter 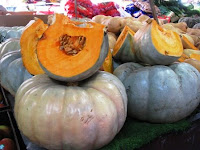 Peter Pumpkin Eater). The name comes from ‘pepon’, a greek word for large melon. Pumpkins are a fruit which are part of the squash family. Not just a fruit but a berry, albeit the only one with such a hard outer shell.

So it should be no surprise to find that it seems to be used like a fruit for cakes and pies in the USA. Pumpkins originated in the Americas. Seeds have been found in Mexico from 7000-5500 BC. The English colonists ate so much of this fruit that the port of Boston was once known as Pumpkinshire. Pumpkin pie, jack o’ lanterns and pumpkin festivals have become part of the way of American life. Apparently 99% of pumpkins are sold for decoration but I think this must be only in America.

In Australia there is so much more to pumpkins than fairytales and festive food. I grew up eating pumpkin mashed or roasted beside my vegies, or in soups, casseroles and curries. We use them when baking scones, bread and biscuits. And I highly recommend them in quiche, burgers, mole, dips, risotto, pasta, cornbread, salads, chutney, pancakes and smoothies. Pumpkins are moist and sweet with a willingness to adapt to any dish. We even have pumpkin kitchen tips such as using pumpkin to thicken a stew or dusting leftover raw pumpkin with pepper to keep it fresh.

Pumpkins are available year round in all shapes. I buy it in large wedges and never see it sold as a puree in tins (as seems to be common in America). You need a good heavy chef’s knife to cut through it and a small knife to scrape out the seeds. Wiki says that most pumpkins have orange or yellow skins but most pumpkins I buy have dark grey or green skin.

When I was young we mostly ate was the large grey/blue-skinned Queensland Blue (photo above) and if we were feeling fancy we might have had a Butternut Pumpkin (which is known as Butternut Squash in other countries). Now Kent and Jap pumpkins (right hand photo) with their bright orange flesh and dark green skin are popular with shoppers, including myself. I took the top photo at a farmers 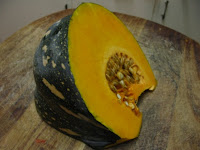 market of heirloom pumpkins, which made me wonder if anyone had considered naming pumpkins after a giraffe.

So this has left me asking the question: where has the Australian love of pumpkins for dinner come from? When so many of our food habits come from America and Britain, why do we treat pumpkins as a regular vegetable rather than as pie fodder or pig feed? Have I discovered something that is uniquely Australian? Not an easy question to answer. It got me searching historic cookbooks, reading One Continuous Picnic and engaged in conversation with booksellers.

Michael Symons’ history of food in Australia, One Continuous Picnic, was the source of greatest insight into Australia’s love affair with pumpkins. The first mention of them in the book is on pp 34-35. In 1830 Alexander Harris describes the bounty of small Hawkesbury farmers. He says that the pumpkins were ‘as big as a large bucket’ and the chief vegetable in most households. It is mentioned again on p 107 in a childhood reminiscence of pumpkins appearing day after day in the 1850s. Then on p 164 there is a mention of pumpkin as one of the vegetables being recommended to be boiled on the side by a 1930s cookbook. It’s not much.

I decided the best way to find out the history of how Australians when pumpkins became popular was to search historic cookbooks. A 1970s history Two Hundred Years of Australian Cooking by 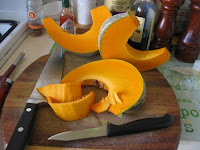 Babette Hayes gives a disturbingly fascinating recipe and photo of possum cooked in pumpkin which seems to be from colonial Australia. Philip E Muskett, who wrote The Art of Living in Australia in 1893, gives a recipe for pumpkin soup (but so do British vegetarian cookbooks from the same era so it does not prove it is uniquely Australian). There is no mention of it at all in my Green and Gold Cookbook (c 1940s).

I find that pumpkin often gets paired with marrow. Marrow? Squash? Pumpkin? What is the difference? This is not my area of expertise but I have noticed that often American and Brits say squash where I would say pumpkin (eg butternut) so I think some confusion arises here. Colin Spencer says that pumpkins and marrows are part of the squash family. I always thought marrows and squash was softer than pumpkins.

In the 1950s/1960s Australian Cookery of Today Illustrated which gives recipes for steaming and stuffing marrows or pumpkins as well as jam, scones and tarts made from pumpkin. A Sanitarium recipe book from early 1950s gives recipes for pumpkin scones and pumpkin fritters which are sprinkled with sugar and cinnamon. Strangely enough this recipe is repeated in the Vegetarian section of a 1955 Presbyterian Women’s Missionary Union (PMWU) of Victoria cookbook.

generations. At the top of the list is cream of pumpkin soup. Pumpkin soup also gets a place in The Women’s Weekly Best Ever Recipes (c1980s).

So I don’t really have any answers, but I do have more questions. I’ve had fun searching but I felt I finally had to stop and write. I have a few hunches. Colin Spencer’s comment that marrows (read ‘pumpkins’) are native to temperate and tropical climates suggests the Australian climate was just right for them. I once went to a student house that I had been told had a vegetable garden and it was merely an out of control pumpkin vine. But Denis Cotter describes pumpkin as ‘so damn useful’ and boldly claims that they grow so well in Ireland that they might have become part of the Irish culinary tradition if they had been discovered earlier.

I love Colin Spencer’s description of the colour as the pumpkin’s ‘greatest quality – that’s fiery russet or Van Gogh orange sets the table aflame’. He also says that large pumpkins were a common sight in London’s markets in the Nineteenth Century and that it was used to bulk out bread. Is this possibly where our love of pumpkin scones originated? I also found some fun facts about pumpkins including that they were once believed to cure snake bite and remove freckles, which also could have been quite useful in Australia.

Before I tell you about my recipe, I will lastly just mention the more modern appearances of pumpkins in our culture. The band Smashing Pumpkins, Jack the Pumpkin King of Halloween Town in The Nightmare before Christmas, and The Great Pumpkin who haunts Linus van Pelt in It's the Great Pumpkin, Charlie Brown. Surprisingly Shakespeare mentioned the vegetable with the old spelling in the Merry Wives of Windsor (c1600): ‘Go to, then: we'll use this 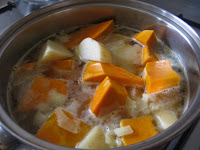 unwholesome humidity, this gross watery pumpion; we'll teach him to know turtles from jays’. I don’t know what it means but he doesn’t sound like a fan of the stuff.

It seemed obvious that the recipe to post here was pumpkin soup. As I said above, it is something I grew up with. I originally decided I would post a recipe for pumpkin and lentil soup but it was too watery. I decided to go back to a basic recipe. I tried just pureeing pumpkin and onion in stock and it tasted just like pureed pumpkin. Too basic! So I looked for a recipe like we used to eat – no fancy vegies or spices added. The key seemed to be to add some potato. I also added some cream because I had some needing to be used but I found it made it quite rich. The result was delicious and velvety. 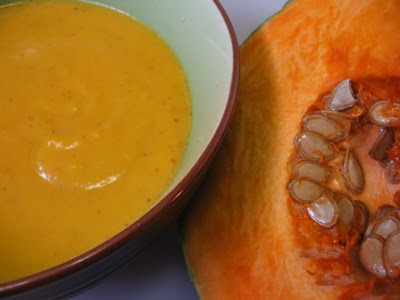 In the course of my searching pumpkin soup recipes I came across lots of ideas for flavourings so I thought I would list these to show just how versatile this recipe could be if you fancy something different. But I do recommend this recipe which is just what I suspect my ancestors might have cooked or eaten in a city café.

- Fry onion in oil (or if you want a low fat version cook in a small amount of water)
- Place remaining ingredients, except cream, in a large saucepan.
- Simmer until vegetables are tender. (Approximately 15-20 minutes)
- Remove from heat.
- Blend with a stick blender until smooth.
- Add cream and stir through (do not boil after adding cream).
- Season to taste.
- Serve with a garnish of freshly grated nutmeg

And because I feel that our worldview of pumpkin is not know as well outside Australia, I am sending this to Simona from Briciole who is hosting Weekend Herb Blogging this week, the event founded by Kalyn from Kalyn's Kitchen.

On the stereo:
Country Songs for the Aussie Bloke – 30 Tracks and that’s No Crap: Various Artists
Posted by Johanna GGG at 13:44