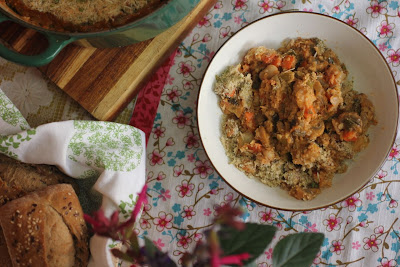 I have a favourite cassoulet recipe I have been wanting to share on my blog all winter but when I made it a few months back, E complained about the powderiness of the topping. Then I happened across a piece on cassoulet by Waverley Root in Mark Kurlansky’s Choice Cuts: a miscellany of food writing. Waverley Root explained that there is a tradition that the crust should be broken seven times during cooking. The top photo shows how my epiphany about breaking the crust changed the texture and appearance from my below 'powdery topping'.

Of course, being vegetarian, I am well aware that I am often reinventing meat-centric traditions. Cassoulet comes from France, the land of rich meaty meals. Even so I was quite horrified at the traditional recipes which included pork sausages, pork, goose, duck, and sometimes mutton. Enough to turn anyone vegetarian! 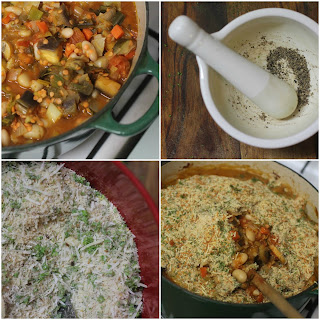 I am happy to do away with the meat but I love the traditions. Cassoulet is said to have originated in the 14th Century in Castelnaudary in the south of France during the Hundred Years War. During a siege, the Provost Marshall apparently made this by putting all foods into a communal dish that was so hearty it gave the army courage face the surrounding British army. I can’t help thinking there wouldn’t have been many animals left in the village. But of course it is not a tradition without its doubters.

So much debate arose over the origins of cassoulet that Prosper Montagné of Larousse Gastronomique decreed in 1929 that "God the father is the cassoulet of Castelnaudary, God the Son that of Carcassonne, and the Holy Spirit that of Toulouse." It is also claimed that the true spirit of the dish is not in the town that created it, but in the magic of the sharing. Indeed it does seem like a dish that could feed a village. 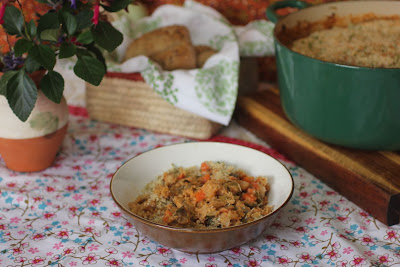 A quick search of the web showed that this is a dish to be taken seriously and slowly. In France there is an Academy of the Cassoulet. I suspect they would be none too forgiving of a vegetarian version. More open to a vegetarian version is a chap called John Whiting who spends a week preparing cassoulet for his birthday dinner each year. Makes Julia Child’s 3 day version seem quick and easy. Whiting includes a vegan version in his notes full of wonderful flavours such as roasted vegies, sun dried tomatoes, wine.

Now I appreciate his version because I have done some searching for vegetarian version and many just seem to be beans, carrots and celery. Isn’t this just taking out the meat? I protest that a proper vegetarian version must include textures and flavours which impart some of the richness that meat gives to a dish. It doesn't take much imagination.

Traditional versions seem to include bean layers and meat layers. But there are debates about what meat and whether to include breadcrumbs on top. In fact there are so many versions that Whiting says that “if you go into an isolated Languedoc village and ask fifty housewives how to make a cassoulet, you will get at least fifty-one recipes.” You can easily find many recipes that include the traditional, the casual, without breadcrumbs, and without meat on the web. 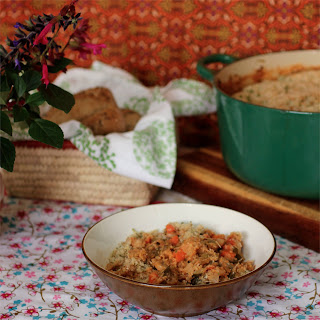 According to Waverley Root, traditionally cassoulet would continually simmer in the pot – he quoted Anatole France who claimed the cassoulet he used to eat in his favourite establishment in Paris has been cooking for 20 years. When I told E about this, he thought it sounded like his sort of dish because there would be no washing up.

The version that I have been making for a few years is one I found on the internet and sadly am not able to credit because I have not been able to find it again. It is far superior to many versions I have found because it is packed with an interesting combination of vegetables and legumes. I would advise that the cheese and breadcrumbs are optional because it tastes so good without 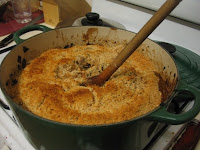 them but I do enjoy the creaminess when they are stirred in. It will not appeal to those who don’t like chopping veggies but once the veggies are prepared there isn’t much else to do apart from a little stirring. It is worth the effort and much quicker than 3 days or even a week. This recipe lasts E and myself for almost a week and is a complete meal.

I am sending this recipe to Equal Opportunity Kitchen’s Tried Tested and True recipe event. I thought this would be a good dish as they are asking for a health-promoting dish which is a lighter version of the original. Then I saw that they are judging recipes on visual appeal. Cassoulet is meant to be a blackened stew in a burn-out pot so I am sure they will appreciate that the appeal is in the tasting not the viewing! 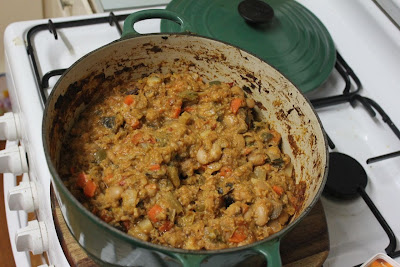 Update July 2013: I cringed recently at the photos on this post so I have updated them after making the Cassoulet again recently.  It isn't the bonniest of dishes but I have attempted to imbue it with some peasant charm.

Heat oil in a large stockpot (preferably an ovenproof one like my le creuset stockpot) over low heat and add onions, garlic and fennel. Cook, stirring frequently for 20-30 minutes or til browned. NB The time while the onions brown is ideal to chop up the remaining vegetables.

If your stockpot isn’t ovenproof, transfer to a large casserole dish. Scatter cassoulet with a mixture of parsley, parmesan and breadcrumbs. (You can keep some aside for later if you wish.) Place casserole dish or ovenproof stockpot in the oven and bake for about 20 minutes at a moderate heat (180-200 C).  Do not worry about the seasoning too much at this point because once the parmesan is stirred in it will have a lot more salt in it.

Remove dish from oven and use a wooden spoon to break the crust and stir into cassoulet. If you wish, you could scatter with some reserved parmesan and breadcrumbs mixture after stirring. Return to the oven for about 20 minutes. This time is fairly flexible and could be extended by hours if you wanted to try breaking the crust seven times! John Whiting advises it is best if made a day ahead and the leftovers were definitely excellent!

Update July 2013: when I made it recently I added another tin of beans but it was rather thick so I probably should have been more generous with the liquid.  I only baked it for 10 minutes after the first stirring in of the crust because it was late at night (3 hours after I had started making it at 8.30 with a few small interruptions).  The next day I baked it for a few hours on 160 C and it could have been baked longer.

On the stereo:
Way Out: Alessandra Celletti
Posted by Johanna GGG at 18:55