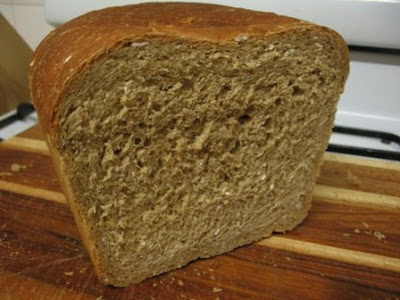 I think it would be safe to say that I have baked more bread this winter than in any previous winter. I am on a mission to bake more bread. One day I will finally graduate to sourdough baking but for now the yeasted bread is tasting just fine.

So I am interested in finding tasty and easy bread recipes. Susan’s regular Yeast Spotting at Wild Yeast is a good place to start looking. I have also been interested in Celine’s bread baking at Have Cake Will Travel. She has posted some good quirky ones lately like her peanut butter bread. But what has really fascinated me has been her addition of ‘vital wheat 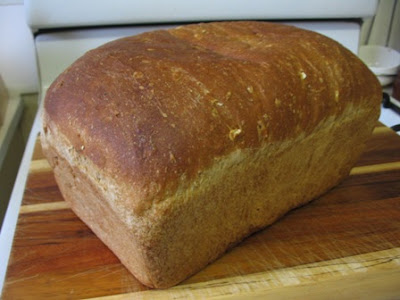 gluten’. I finally have discovered what I think is the local equivalent – gluten flour – thanks to Cindy. Of course I had to try it. I think I am right in claiming that it makes ordinary cake flour into strong high-gluten bread flour.

So with my new packet of gluten flour, I set out to try one of Celine’s bread recipes. In my searching I was delighted to find that although she has a bread machine, she has really helpful instructions on how to convert a bread machine recipe for those of us without such technical help.

The recipe I chose was an Oatmeal Beer Bread. I tried to follow Celine’s recipe but she called for oatmeal stout and all I could find was a more ordinary barley and wheat stout. Of course I didn’t need to use the whole bottle so E drank the remainder.

He amused me by reminiscing about stout while he drank half a glass of the stuff. Apparently he first drank stout when he was taken on a school outing to a pub in his last year of school. This 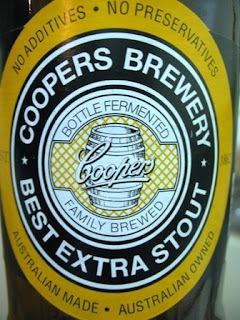 made me laugh. No wonder the Scots know how to drink if they teach them at school. He did protest that it was extra-cirricular activitives - but really! Then he the told me that stout is an old lady’s drink and Ena Shaples from beloved British soap, Coronation Street, enjoyed a pint of stout. Well, I always thought it was a manly drink and that ‘girls’ drank fizzy lager. But according to the Corrie Blog, stout is often prescribed to new mothers and the sick because of its additional value. Well, my dad does say he could have a can of guiness for a meal!

Back to the bread. Celine’s method was by bread machine so I had an opportunity to find that her conversions to a hand method worked well. And the bread was soft and had a good texture. But when I asked E how it was he replied, ‘stouty’. I was surprised at how strongly you can smell the stout in the bread. I am still swithering about if I like that or not. One moment I think I will use a lighter beer next time, and the next moment I think I really enjoy the added flavour and will stick with stout. I’m not complaining. I have been enjoying it for breakfast this week. It toasts up a treat!

(PS. I am particularly pleased to get this post up because I had it written a few days ago and for 2 or 3 days running my internet connection has been so bad I couldn't post it. Most displeased!)

Proof the yeast by mixing it with the sugar, stout and warm water in a bowl and setting aside for about 10 minutes. It should start to go just a little foamy. I did this in the large mixing bowl I used to mix the dough but you could do it in a small bowl and spend the 10 minutes placing the remaining ingredients in the large bowl.

Mix remaining ingredients with the yeast mixture to form a shaggy dough. Knead on a lightly floured board for about 7-10 minutes til the texture of an ear lobe. My dough was very sticky and needed quite a lot of flour as I kneaded. Place the dough in the bowl (I didn’t grease the bowl in deference to my friend Yaz’s claim that it impedes growth) and cover with a damp tea towel. Set aside in a warm place about 90 minutes or until doubled in size.

Punch down and shape to form a loaf. Place in a lightly greased small loaf tin (mine is about 20 x 13cm). Cover and set aside in warm place for about 60 minutes or til doubled in size. Bake 30-40 minutes (I think mine baked 30 minutes and then I returned it to the oven out of the tin for another 10 minutes so the crust could toughen up a little.)

Remove from tin once the bread is baked and cool on a rack before slicing.

On the stereo:
A Rush of Blood to the Head: Coldplay
Posted by Johanna GGG at 19:42