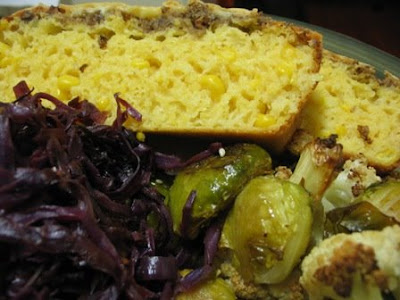 The last few days I have been eating a cornbread that Tanna recently made on My Kitchen in Half Cups. I had to try it because she claimed it to be ‘the most magnificent corn bread’ and because it was quite unlike any corn bread I had seen before. There was one problem. This corn bread was different because it was baked with sausage as a topping. However as a lover of all things sausage so long as there is no meat (in a manner of speaking), I decided I was up for a challenge.

I was tossing up between trying this with vegetarian sausages or nut roast. I had a leftover piece of nut roast in the freezer that needed to feel useful so that decision was made. One difference that I have noticed between faux meat and meat is that the animal kind leaves great rivers of fat 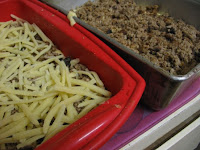 The batter was very runny and it made 2 soft moist loaves so I had had plenty for lunches and dinners. The first night I served it with some cauliflower and brussels sprouts which I roasted with a little dukkah, plus some red cabbage and onion which I fried up with some garlic and orange juice and zest. It was nice but a little dry. Needed more juice. So I decided to make soup the second night.

Lysy had made some borscht recently which looked wonderfully crimson and sounded delicious. The recipe was the one her grandparents used to make her and it came from the Entertaining with Cranks cookbook. I was impressed because, much as I loved my grandmothers’ cooking as a child, I just couldn’t imagine them cooking from vegetarian cookbooks. Then again, nor could I imagine them cooking borscht. I was inspired by Lysy’s suggestion that some soups can be eaten hot or cold and that this is one of them. She served hers chilled but it is not the season for such summery treats in Melbourne.

Just like with the corn bread I made some adjustments to suit me. It amused me to see the Lysy used a food processor in preference to grating the beetroot. I also read once that Nigella wears gloves to cut up beetroot. I don’t mind getting my hands stained purple 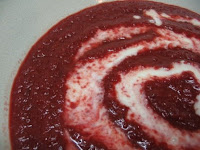 but I will happily grate beetroot rather than having the palaver of using a food processor. I also wanted to use up some of the leftovers from the previous night so I added the leftover cooked vegies and substituted buttermilk for the sour cream/yoghurt. Both worked a treat. I even shortened my cooking times because I started cooking at 7.30 and was horrified to see it should cook for an hour. Luckily I didn’t have to wait for it to chill as well.

The soup was fantastic with the corn bread and made me think yet again, how interesting blogging is because we see the different ways people cook. Lately I have come across three useful pieces of advice that relate to this which made great sense to me. These words seem obvious but there is so much advice floating around the internet that it is cheering to see such wisdom. I fear that common sense is not so common anymore.

Firstly, Susan of Wild Yeast wrote about doing what works for you and not doing what doesn’t work for you. Sounds obvious? But it is where instinct kicks in. Such advice makes sense of the times instructions or suggestions sound helpful but I know they wont work in my kitchen.

Susan directed readers to another great post by David Lebovitz which reflects on what is a handful. He says that when you are instructed to add a handful in a recipe it means the exact quantity doesn’t matter. He also shares some interesting thoughts on writing recipes and how easy it is for them to be misunderstood. He makes the point that a lot of recipes are for people who have a sense of cooking. I think that the less someone is familiar with cooking the more they have to following recipes to the letter which is where they can be confusing, because they don’t have instinct to 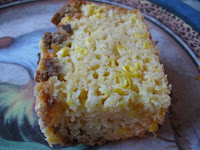 fall back on. But more experienced cooks know that methods and amounts often depends on many variables such as the your oven, the weather, and source of ingredients.

Which leads me to the last piece of wise advice I saw recently. It was passed on at Limes and Lycopene, where Kathryn directed readers to a quote by Craig Hassel whose advice on whether coconut oil is healthy or not summed up what she would like to answer to the general question, is this healthy or not. In a nutshell the answer is, it depends. But this quote expands on this a bit by saying it depends on your genes, your diet, your lifestyle, how often you use it etc etc etc. It reminded me a little of Michael Pollan’s common sense advice which I wrote about a few weeks back.

Life just isn’t that simple, just as it is not a matter of following a recipe to the letter. We should listen to our gut instinct occasionally because so often the instructions we are following don’t take into account our ovens, our climates, what sort of day we have had and what else is going on in our lives. So here are my versions of these recipes, but if you are interested in trying them, I expect you will make your own amendments!

The night before: mix cornmeal and buttermilk in a large bowl, cover and leave at room temperature overnight. The next morning little buttermilk mountains were appearing so there was obviously something going on in that mixture. But I was feeling too suspicious of leaving dairy products out of the fridge too long and put it in the fridge until I was ready to bake that evening. Tanna left hers in the fridge for 3 days before using it.

In a small microwave proof bowl, melt the butter in the microwave (or use a small saucepan on a stovetop). Stir in honey. Use a fork to lightly whisk in the eggs. Add to the cornmeal and buttermilk mixture. Add corn kernels and chipotle or chilli.

Add dry ingredients (flour, baking powder, bicarb, salt) to the wet mix and stir to combine. The batter will be quite runny.

Pour batter into the prepared loaf tins and sprinkle the cheese and nut roast on top. (I sprinkled cheese on top of nut roast but next time I would mix the cheese and nut roast first.) Press into the mixture a little. Bake for 40-50 minutes or til they feel cooked when you press gently on the loaves and a skewer comes out cleanly. Keeps for quite a few days (mine is now 3 days old and still quite soft).

Heat the oil in a large saucepan and saute the onion over a low heat. Meanwhile peel and grate beetroot. Add to saucepan and stir 1-2 minutes, then add stock and bring to the boil. While stock is coming to the boil, peel and grate carrots and potato and add to the saucepan. Add spices. Bring to the boil, reduce heat and simmer for 30minutes. Add cooked vegies and simmer an additional 10 minutes. Remove bayleaf and blend using a hand held blender. Add seasoning and a quarter of a cup of buttermilk and stir. If you wish to serve chilled, set aside to cool. If you like it hot, serve straight away. Ladle into bowls. Drizzle with buttermilk and garnish with chives.