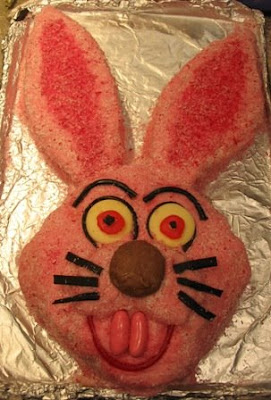 My niece Maddy has a favourite old pink rabbit called Sparkles. So this year when she was planning a pink party to celebrate turning six, she chose a pink bunny rabbit birthday cake. I couldn’t get to the party but most of the fun is in the decorating so I went to Geelong beforehand to help create the Sparkles the Rabbit Cake. We based the cake on a Maisie the Rabbit cake we found at http://www.coolest-birthday-cakes.com/ but made a few changes including deciding against the ribbon in the hair.

I made the cake at home the night before so it was easier to cut and ice. I used a double quantity of this butter cake recipe. Before adding the flour I put a few spoonfuls in a small bowl and added Casalare gluten free flour, baking powder and a bit of milk. This gluten free cake was baked in a greased and 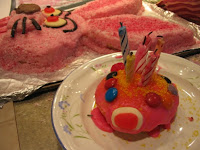 lined ramekin. The remaining mixture had the flour and milk folded in (making allowances for the small bit removed) and I divided it between two tins but I think a swiss roll or lamington tin might also suit the needs of this cake.

In Geelong it seemed like there was an army of helpers (apart from my sister and her husband who were cleaning up for the party). My sister-in-law Erica mixed a large bowl of pink icing which was quite an achievement with my two 3-year-old nieces Ella and Grace helping her. She also helped Ella and Grace decorate the ‘candle cake’ or ‘Grace’s special cake’. I like the idea of a separate small cake for the candles rather than having to find a place on a novelty cake. But my main inspiration was to make sure Grace has something gluten free so she doesn’t miss out.

As I have written before, Grace has celiacs disease and consequently has a gluten free diet. In the past I have tried baking gluten free cakes and she has not been interested. But when I 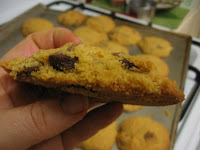 made the Green Giraffe Cake in April and did the little separate GF cake for her, my mum said that later on she was requesting the rest of her ‘special cake’.

I also took down some GF cornmeal choc chip biscuits and told Grace they were ok for her. When Maddy was eating one of my mum’s baked treats (possibly the hedgehog), Grace helped herself to one of my cookies and seemed to enjoy it. I wasn’t sure anyone would like them as they have a much coarser, heavier texture than traditional choc chip cookies but they were easy to make with ingredients from the supermarket and surprisingly pleasing. When I asked E how many I should take to Geelong, he suggested that two might be sufficient as he had taken an unexpected shine to them too. I have included the recipe at the end.

My dad also was a willing helper who would probably do more cake decorating if it involved power tools. When we were working out about doing the eyes, he thoughtfully offered to drill 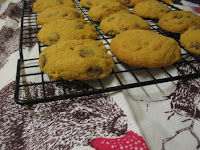 some holes in some lollies (when I say lollies I mean candy in America and sweeties in the UK). I declined but it reminded me of one Christmas when we were young. He spent time drilling holes in fruit tingle lollies to make a necklace for my sister. It was the year we each got a packet of fruit tingles for a present in amusing and creative ways. Dad also contributed with cutting up liquorice, offering his pliers to manage the liquorice and cleaning up the mess we left in the kitchen.

Number 1 helper was the birthday girl who remained by my side up to her elbows in pink coconut, selecting the right lollies, sprinkling coconut and pressing on the lollies. Her little sisters also gave a bit of help with the decoration. By the end, it seemed that every time I turned my back there was another little hand sprinkling a bit more pink coconut on the cake. They were thrilled with the cake. Before I left, there was a lot of joy and pride in the cake that looked just like Maddy’s Sparkles. By all reports the party was a great success and very pink!

Sparkles the Rabbit Cake
You will need:

- double batch of butter cake batter divided into a 15cm (6 inch) square cake tin, and a 23 cm (9 x 9 inch) square cake tin and baked as per the recipe
- pink icing (frosting) made with icing sugar (confectioner’s sugar), a bit of melted butter and some pink food dye
- desiccated coconut
- extra pink food dye
- black liquorice
- red liquorice
- round brown lolly (candy or sweetie) or biscuit for the nose – we used a choc mint patty but I also considered a disk of milk chocolate
- two large white lollies for the eyes (we used discs of white chocolate)
- two smallish flat round red lollies for the eyes (we used jubes which I think are also called jellies)
- two long thin lollies for teeth – Maddy wanted pink so we chose some candy coated liquorice

How to make the cake:
First take a sharp knife and trim the corners of the small square cake so the edges are more round as this will be the face. Then cut two long ears from the large tin and a small oblong snout with a little dip where the teeth will be (see picture). Leftover cake can be used in cake crumb cookies or truffles.

Make the icing if it is not already made. It should be thick enough that it wont drip over the sides of the cake. Colour the coconut by placing it in a large shallow bowl with a fewdrops of pink food 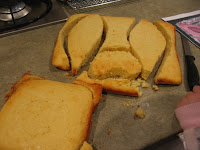 dye. Using your hands rub the food dye into the coconut (and don’t worry if your fingers stain – it comes out after a day or two). Be generous with the amounts of icing and coconut because if you run out it is difficult to match the colours. Luckily my mum was making jelly cakes and other pink party food and happy to use up the leftover icing and coconut.

Now assemble the cake. We used an oven tray covered in foil for the tray. The small square is turned to make it a diamond and placed at the bottom of the tray. The ears are placed at the top of the head. We trimmed the ears because they were a bit long. Then the oblong snout is placed with the top just above the 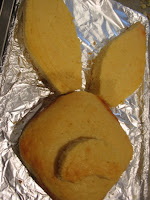 halfway mark on the face (see picture). A little icing can be used to ‘glue’ the ears and snout to the face.

Use a butter knife to evenly spread the icing over the top and sides of the cake. If it is difficult to spread (especially where the cake has been trimmed) the icing knife can be wiped and dipped in a mug of boiling water to help spreading or smoothing icing. While icing is still wet sprinkle it with coconut. As it will take a while to spread the icing over the whole cake you will need to sprinkle coconut as you go or use the knife dipped in hot water and run over the surface of the icing to lightly moisten it.

To finish the ears, I rubbed a bit more pink food dye into some of the leftover coconut. I used a finger that had been rubbed with the pink dye while doing the coconut and dipped it in the hot water. Then I rubbed my finger over the ears to wet the icing, leaving about a 1cm margin around the outside. (alternately you could use a pastry brush but you should be careful not to wet the icing too much). I then sprinkled the wet darker pink area with some of the darker pink coconut.

For the face, I used a little icing to ‘glue’ the round brown nose onto the snout, the round white discs for eyes just above the snout and the teeth just below the snout. I glued red lollies to the whites of the eyes and then a little bit of black liquorice as the inner eye. We had to cut black liquorice into thin strips for the outline of the eyes, the eyebrows and the whiskers, plus red liquorice for the outline of the mouth. I wet the areas I was pressing the liquorice into but found it quite hard to get the outlines of the eyes to stick. Maybe next time I will wet it before putting the eyes on. Use a dry pastry brush to brush away the extra coconut from the cake and then from the tray. Now your rabbit is complete and looks a little crazy but likeable.

Cream butter and sugars till light and fluffy. Beat in egg and vanilla. Fold in rice flour, cornmeal, baking powder and salt. Then fold in chocolate chips. Drop teaspoonfuls on a greased/lined baking tray leaving space in between for them to spread. Bake at 180 C for 10-15 minutes or til slightly browned. Cool on a wire rack and store up to 1 week.

On the Stereo:
Sergeant Pepper’s Lonely Hearts Club Band: the Beatles
Posted by Johanna GGG at 22:31