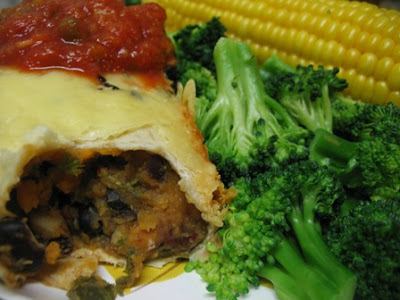 I don’t get excited by chillis but I do love to wander through a foreign food store in search of something different from our usual supermarket offerings. On a visit to Casa Iberica in Fitzroy recently I was intrigued by a tin of chipotle peppers in adobo sauce, which I had never seen before. I also bought tinned black beans and dried garlic flakes because I rarely encounter them elsewhere.

To celebrate my first purchase of chipotle peppers I thought I should find out just what they are and turned to the trusty Wikipedia. To my surprise I found they were actually red jalapeno peppers that had been dried in a smoking chamber. It was less surprising to then discover that 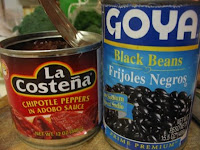 the word comes from Nahuatl for dried chilli. For those of you wondering about Nahuatl, it is a group of dialects and related languages of the Aztecs. Curious about the history, I turned to the Tabasco Historian who writes that they have been eaten in ancient Mexican civilizations since before the Aztecs.

It seemed only right and proper that I sample my new chipotle peppers in a Mexican dish and I had been eyeing off Wendy’s version of the Moosewood’s Black Bean and Sweet Potato Burritos that she posted recently. How would they be with chipotle? I couldn’t resist finding out.

Rather good, actually. Smoky and fiery hot. Even E (who is known as Mr Tabasco Fiasco in this house for his tendency to add Tabasco to almost every meal I serve) exclaimed at the heat. 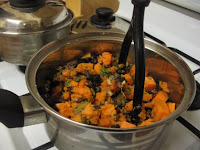 Fortunately I warned him to taste before he doused. It may have been made hotter by me adding more of the adobo sauce than I had intended because the jar I put the remains in was a little bit too small. Wikipedia gives them 3 out of 5 on the heat scale but they are much hotter than I am used to. However, I am sure there will be a lot more of them on my blog as I have a jarful to get through.

While I was feeling like the Curious Orange, I also did a little experiment with the cheese. When Wendy had posted her burritos, I wondered why she had grilled the cheese after cooking them rather than just cooking them with cheese on them. So I tried just baking the burritos with cheese. It didn’t crisp up as I had hoped. But if I had grilled it I am sure my ends of burritos would have charred 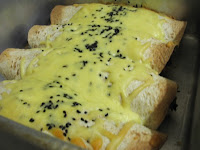 (unlike Wendy’s very appetizing looking ones). I have decided that tortillas are just too delicate to be able to produce a nice crispy golden cheese topping and maybe next time I should try adding the cheese to the mixture.

Wendy served hers with tomato salsa but I wasn’t organized enough. Only as I was cooking them did I remember they needed some sort of sauce. I cooked up a quick makeshift tomato sauce out of tomato passata, pumpkin chutney, a pinch of salt, spring onions and garlic. It was very good. We also had broccoli and corn on the cob with them. The following night I lightly fried some vegies and added more of my passata which was lovely. There are lots of ways to eat these burritos and I highly recommend you try some. But if you do use chipotle peppers and feel about chillis as I do, go easy!

Meanwhile, heat a little oil in a medium sized saucepan. Fry spring onions and garlic over low heat for 2-3 minutes. Add cumin and coriander and cook for 1 minute.

Remove saucepan from the heat and add sweet potato, chilli, black beans, parsley, lemon juice and salt. Use a potato masher to roughly mash together. (Or use a blender to roughly chop.)

Pre-heat oven to 170 C and lightly grease a 23cm square baking dish (I used a cake tin because it was the best size in the kitchen).

Divide the sweet potato mixture between 4 tortillas. Spread mixture along the middle of each tortilla, roll up and place in baking dish with seam down so they fit snugly.