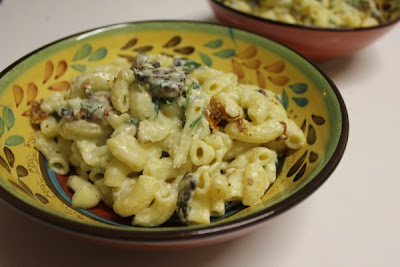 Winter colds and coughs call for easy meals.  We seem to have had our fair share of snuffles.  Sylvia was sick all weekend and E has now succumbed to the same lurgy.  This Cauliflower cheese macaroni was made a few weeks back when we all had come down with the cold and our energies went into chasing tissues and Sylvia around the house.  I needed something simple for dinner. 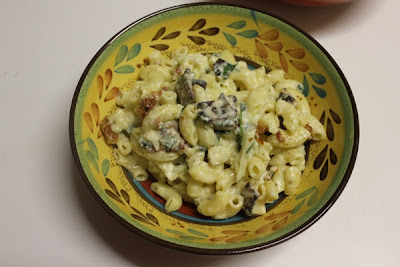 This dish is quite similar to one of my favourite pasta dishes but the vegies are cooked with the pasta rather than roasted.  I wrote about Jamie Oliver's Ministry of Food a few years back.  The recipes he was teaching people too cook seemed quite challenging for those who weren't in the habit of cooking.

This recipe comes from one of his cookbooks that seems to be inspired by similar shows in America.  It is the sort of recipe that I would want to be given if I wanted good healthy simple recipes.  However, as I cook a lot, I changed it, added more veg and more flavours.  It was fantastic.

I am sending this pasta to Ruth of Once Upon a Feast for Presto Pasta Nights #275. 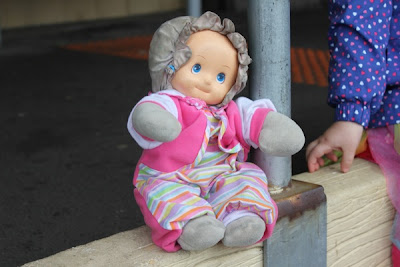 On an unrelated note, I wanted to share a gratuitous photo of dolly and  a few things I have heard on the radio recently:

Previously on Green Gourmet Giraffe:
One year ago: Canberra - of modern museums
Two years ago: NCR Carrot and Fennel Soup
Three years ago: Carrot Cake and the Lost Sock
Four years ago: Easy as Vegetable Pie
Five years ago: Rumbledethumps: death to the red hag!

Bring salted water to boil in a large saucepan (I think I used my stockpot with the pasta insert in it).  Place chopped cauliflower and macaroni in boiling water and bring to the boil again.  Reduce heat and simmer for about 10 minutes or follow instructions on the pasta packet.

When pasta is cooked, drain and return to the saucepan.  Add cheese and stir until melted.  Add remaining ingredients and stir.  The heat of the pasta and cauliflower should warm the dish.  Serve hot.

On the Stereo:
Spandau Ballet (freebie CD in The Mail on Sunday)
Posted by Johanna GGG at 23:17