Microwave butterscotch pudding with a touch of yellow 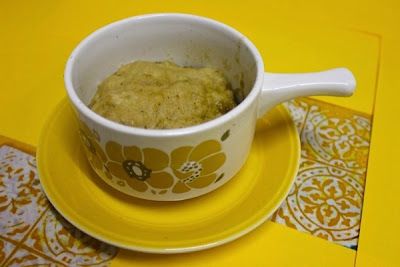 It is often about expectations!  We expect to live a long life, to see our partners grow old and our children grow up.   We expect this because we can't bear to think of the alternatives.  That life might be hard and sad and cruel.  We expect, we hope, we demand, we cajole and we even pray.  Yet life doesn't always provide.  I've known too many people affected by cancer since starting this blog and today remember fellow blogger, Barbara Harris who died of cancer on 29 June. 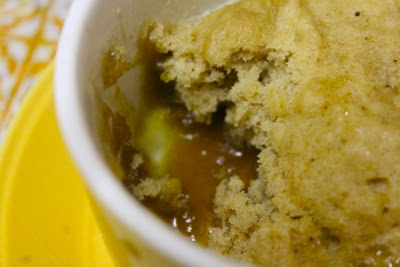 I have a confession to make.  I read Barbara's last post on Winos and Foodies and I didn't leave a comment.  I wish I had.  I was busy.  I was tired.  I didn't know her very well.  But I knew of Barbara, especially through in her fantastic Taste of Yellow events that raised awareness of cancer.  I liked her.  I just never expected it was the last post that she would write.  It was full of life and colour and cheer.  I never expected cancer would take her so soon from her family and friends and from the blogging community.

I was pleased to discover that Jeanne of Cook Sister was hosting Meeta's Monthly Mingle dedicated to the memory of Barbara.  Other than giving me cause for reflection in my Taste of Yellow contributions, Barbara's post that had the most impact on me was her cookie wands.  It inspired me to hold a cookie wand making activity at my niece's birthday last year. 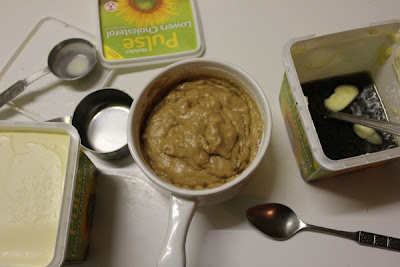 I chose a Microwave Butterscotch Self Saucing Pudding.  E has taken to buying wee golden syrup puddings from the supermarket so I thought this might go down well.  Finally on a wintery night when Sylvia was feeling poorly and went to sleep unusually early (a bit like tonight), I tried the recipe. 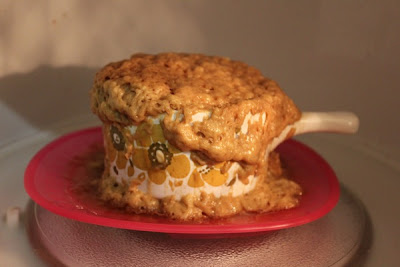 I never expected it would take me three goes to get it right.  Things we do!  The first time I made the pudding I used too much sugar, consequently also needing too much flour and too much milk.  The result was a huge pudding that exceeded my expectations.  Actually that wasn't a good thing.  I watched with a mixture of fascination and horror as the pudding expand in the microwave like the blob.   It was a beast that grew and grew and engulfed the bowl. 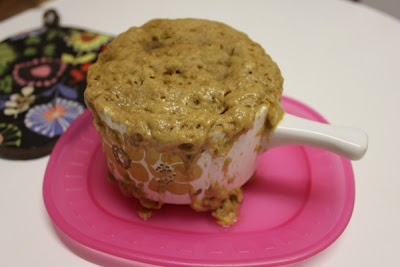 The second time I revised my notes and made changes.  I thought I had the proportions right.  As both Lorraine and Uru had made a pudding for one, I doubled it.  We had a bowlful each.  They were huge.  E accused me of super-sizing him.  Yet again it overflowed and was difficult to eat.  It was also toothachingly sweet. 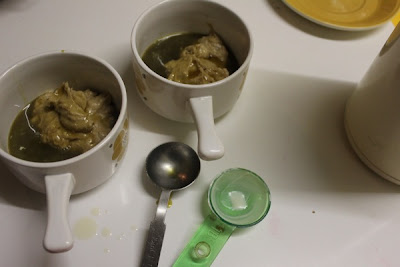 Third time lucky.  I reduced the sugar, omitted the baking powder, kept the milk to a minimum and split one lot of mixture between the two of us.  This time it was perfect for us.  Not too sweet.  Not too filling.  Just right.  E would have liked some ice cream but I am more than happy to eat pudding without a creamy accompaniment.  After all this has a saucy bottom that works perfectly in a microwaved pudding. 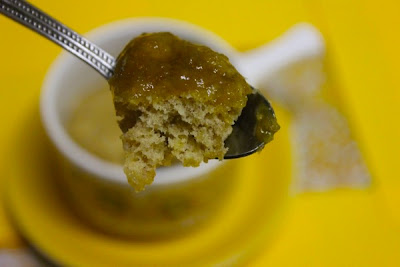 This is a perfect pudding for a lazy wet winter day.  It is quick, comforting and delicious.  In fact I have some bananas in the kitchen that need using.  Pudding seem just the thing!  You might have expected that a butterscotch pudding might be a little more golden-hued but I am sure Barbara would have been more generous than critical.  She will be missed.

Previously on Green Gourmet Giraffe:
One year ago: A visit to Orange (the town not the fruit)
Two years ago: PPN Whimsical Mushroom and Rhubarb Soup
Three years ago: Mexican Rice Soup
Four years ago: Paella with thanks
Five years ago: Friday Night Tacos

Microwave self saucing butterscotch pudding
Adapted from Choc Chip Uru via Not Quite Nigella
Serves 2
Sauce
Mix butter and brown sugar in a small bowl.  Stir in banana.  Then add self raising flour and cinnamon.  Stir in enough milk to make a thick batter.  (It should be stiff enough to hold its shape when the sauce is poured on.)  Spoon into two (or one if you are really hungry) microwave proof bowls.  There should be plenty of room to expand.  (I would advise not to fill more than half)

Use the bowl you made the batter in to mix the sauce (unless you happen to have an empty nuttalex tub on hand).  Place butter in bowl and pour the boiling water over it.  This should mostly melt the butter.  Stir in brown sugar and golden syrup.  Pour sauce over the batter.

Cook in the microwave until spongy and springs back when a finger is depressed upon the middle.  I cooked each of mine for 1 minute and 10 seconds (but my microwave isn't very powerful).  Let sit a minute or two before eating.  Serve with cream or ice cream if desired.  Be careful eating the first spoonful that you don't burn your tongue.

On the stereo:
Unknown Deutschland: the Krautrock Archive, vol 2: Various Artists
Posted by Johanna GGG at 20:46