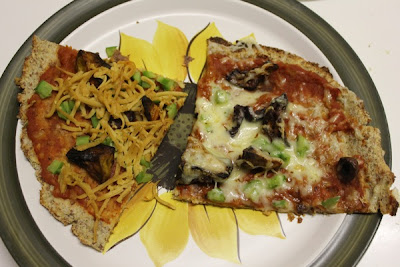 I am exhausted.  It doesn't seem right after I slept in this morning and stayed at home most of the day.  So I made pretzels, playdough, vegan cheese and pizza.  And Sylvia was sick.  And I had weird sci-fi dreams with soap opera stars.  So I wanted to write all about the vegan cheese.  If only I had the energy to share my excitement.  Instead I will tell you about the cauliflower and almond pizza bases I made tonight. 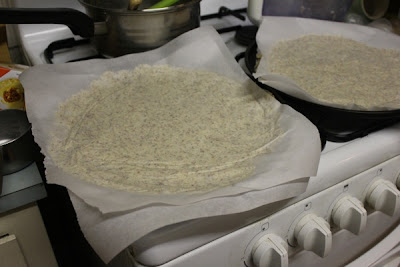 I told you recently about my failure with cauliflower cupcakes.   I tried another cauliflower recipe tonight.  As advised by Caralyn I made sure to wring out as much moisture as possible from the cauliflower rice.  I also loved her method of pressing the mixture together between two sheets of baking paper. 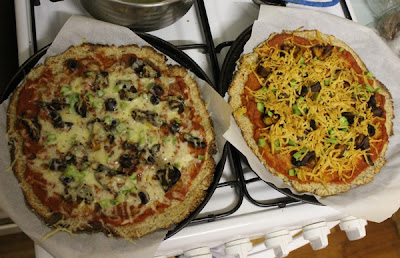 The toppings I used were a tomato and baked beans sauce, roasted pumpkin, black olives, green capsicum and grated cheese.  As you will see by the photos, I was comparing the vegan cheese to our regular cheese.  It did all but melt.  More about that later.  The base was great.  It was crispy around the edges but not quite as crispy on the base as I had hoped.  They were also slightly grainy rather than fluffy.  (And Sylvia said they were yuck though she wouldn't  taste them.)

Quibbles aside, these were delicious.  Less filling than regular flour pizza bases.  Packed with vegetable and proteins.  No kneading, no waiting for dough, no stodge.  Definitely a hit!

I am sending this to KR at Foodomania for Bake Fest, an event founded by Vardhini of Cook's Joy.

Steam cauliflower in the microwave.  I did mine til soft but perhaps should have done it a bit less.  ("Just tender" is what Food to Glow says.)  Blitz in the food processor until the cauliflower looks like rice.  Spoon cauliflower into a clean teatowel and wring out as much moisture as you can.

Return to food processor and add remaining ingredients.  Briefly blitz to combine.  Line two round pizza trays with baking paper and divide mixture between the two trays.  Place another piece of baking paper over each dollop of mixture and flatten until quite thin.

Bake (with baking paper on the top and bottom) for about 20 minutes or until golden brown (I did mine at 220 C but 180 C was suggested and might work better on a decent oven).  Remove top layer of paper.  Place toppings on and bake for another 7-10 minutes (7 was enough for me).

On the Stereo:
Ugly Beautiful: Baby Bird
Posted by Johanna GGG at 23:32