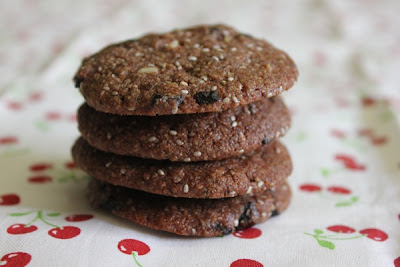 Today was a day of backtracking.  We set out for Fitzroy Market and went home to get my camera.  We went for a walk in Brunswick Street and had to go back and find Sylvia's woolly hat.  We wanted to go straight to hospital to visit my sister and her new daughter but had to head first home for the gifts.  Finally after leaving Fran and Stella, we had to go back to their room to get Dolly who was left behind.  So it is perhaps fitting that tonight I am posting a recipe with dried cherries that I had to head back for after doing the shopping. 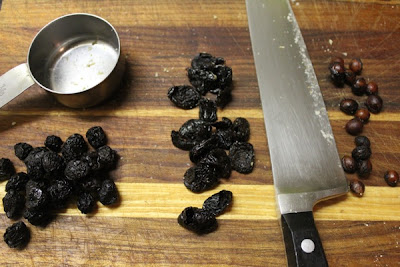 I bought the dried cherries at a local Middle Eastern shop.  Dried cherries aren't that easy to find in Melbourne.  I have bought them on a few occasions.  I couldn't see any in the shop but I asked just in case.  Yes they had them out the back.  When I got home I discovered that these cherries were incredibly sour.  Not so odd.  What was surprising was that they still had the stones in them.

I have never come across stones in dried cherries before.  Baking biscuits late at night to take to work the next day was not an ideal time to be pulling stones out of cherries.  At least it was better than a couple of weeks ago when it was so late that I made the mixture for tofu nut balls last thing at night and baked them the next morning before work. 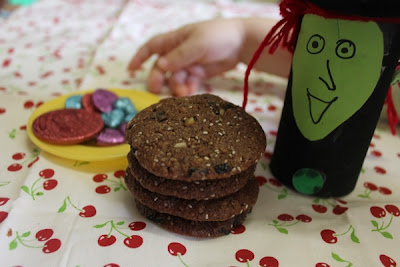 I left the biscuits in the oven a bit longer because I was concerned that they were too soft (especially given that my oven can be a bit slow).  The next morning at work I worried they were too crisp.  The birthday girl that I had baked them for was full of enthusiasm for my baking as always.  Then at home I found the ones I had left there were pleasantly chewy.  I swithered about posting these as I feel I should experiment further but, as I have noted before, it can take me a while and it is useful to have notes.

Unfortunately we had eaten all the biscuits before visiting my sister.  My experience of hospital food was so bad that I took some cheeseymite scrolls and finger buns from the local bakery.  We also took gifts along.  Sylvia's contribution was some of her "treasures" (see above in the yellow plate) which she wrapped in a serviette.  She also helped me make the below card. 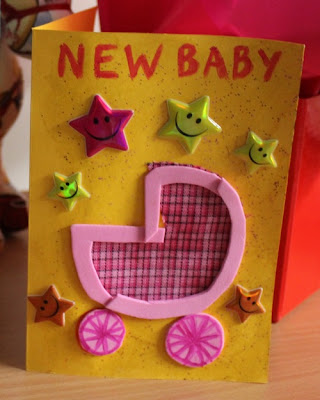 The recipe was inspired by the We Should Cocoa challenge.  This month Janice of FarmersGirl Kitchen is hosting and the theme is cherries.

Mix dry ingredients in a medium mixing bowl.  Add wet ingredients and mix well.  Roll into balls the size of a walnut between your palms and then press  between palms to flatten.

Bake for about 20 minutes.  I left mine in for another 10 minutes after the oven was turned off.  Half were too crisp and then other half (on the less hot side of the oven) was nicely chewy.  But next time I will just do 20 minutes.  Cool on the tray.

On the Stereo:
Der Jesuspilz / Muzik Vom Evangelium: Witthuser and Westrupp
Posted by Johanna GGG at 23:19