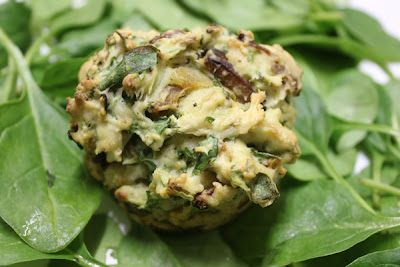 After making vegan cheddar cheese, I wanted to try baking with it.  When Sylvia started up a request for tofu bacon I liked the idea of making muffins with both home made vegan cheese and bacon.  These Bacon and Spinach Muffins were fantastic.  Vegetarian.  Dairy-free.  Easy to adapt to Vegan. Chunky.  Even rustic.  Not overly cheesy but full of flavour. 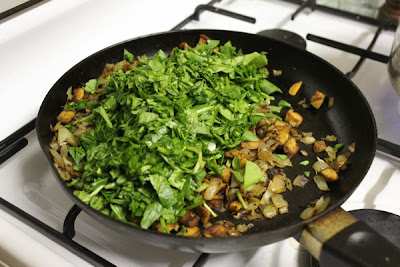 I think I would be right in guessing these are far less fatty than regular bacon and cheese muffins.  Both the vegan bacon and vegan cheese don't ooze oil the way their omnivore counterparts do.  So possibly the texture of these would be slightly richer if I had followed the recipe more religiously.  I also decided to fry my onion and bacon separately because I have tried it together and it isn't great. 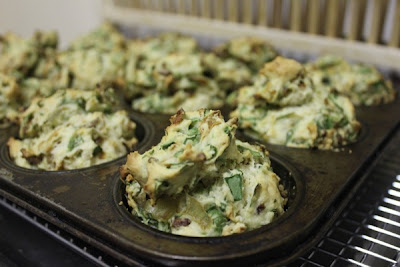 We ate the muffins with some pumpkin and lentil soup (a bit like this one).  It was fantastic.  Not quite as early as I would have liked.  I guess I did ok, given that I only started pressing the tofu at 5pm (and we ate at 7.30pm).  Ideally the pressing and marinating of the tofu bacon should take hours but I take shortcuts here. 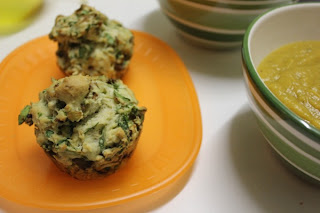 As an aside I wanted to include some random reflections. 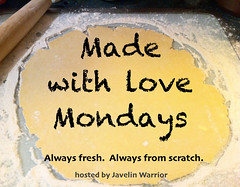 I am sending these muffins to Javelin Warrior for his Made with Love Mondays event.  It celebrates foods made from scratch.

Previously on Green Gourmet Giraffe:
One year ago: Coconut brittle, leftovers and a week of eats
Two years ago: Taste of Melbourne: on a sugar high
Three years ago: Accidental Plastic Tart
Five years ago: WTSIM ... Beggars Burgers

Fry onion in 1 tsp olive oil (or more) for about 10 minutes until golden brown and cooked.  Fry the tofu bacon in remaining oil (I used 1 tsp and then added more oil while it was frying) until crispy and brown.  Remove from heat.  Add spinach and cheese.  (They don't need to wilt/melt, they are just then easy to add together.)

Meanwhile mix flour, egg, milk, and oil to make a stiff batter.  Gently stir in tofu and onion mixture.  Spoon into prepared muffin tins.  Mine were really full but they don't rise too much.  Bake for 20-30 minutes until golden brown and a skewer comes out cleanly when inserted in a muffin.  (I did 30 minutes.)

On the stereo:
The Sound of the Smiths
Posted by Johanna GGG at 23:30