A baby, a carrot cake and green biscuits 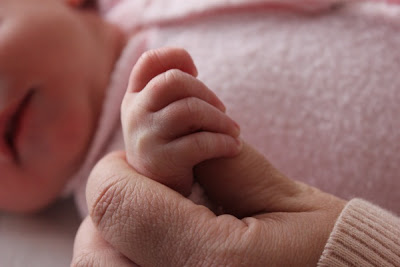 Recently my sister had a new baby.  Little Stella is the eighth child that my brothers and sisters have had.  Yet it is different this time.  It is the first time that one of my siblings has had a baby and I am in the same town and am able to give some support.  It is such a joy to spend time with my sister and her new baby and to see Fran and John so happy. 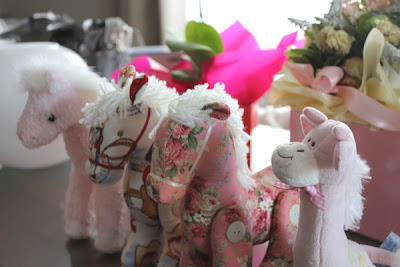 I visited last week to find them in that dazed and confused state that new babies create.  I went into bossy sister mode (a very rare thing, I am sure) and took Stella off Fran to give mother a rest and put baby to sleep.  I brought Fran my favourite parenting book and lots of Sylvia's old clothes.

There are many girls in m family.  Among the clothes in the bag were ones that Sylvia had inherited from cousins, including a gorgeous wee newborn dress.  I've urged Fran to use it as soon as she can because babies grow out of newborn clothes so quickly.  In fact it has been passed to a few babies and I am not sure if anyone has managed to get any wear out of it.  Babies are like that.  Blink and they are a bit girl sitting on your shoulder as you type (ahem, Sylvia)! 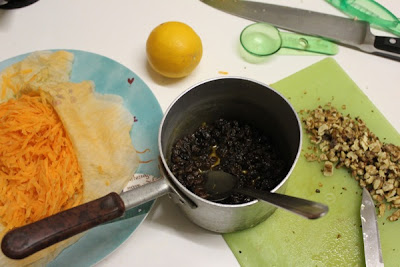 I also took food.  I am a food blogger, after all!  The cake was one I had seen on a Nigella Lawson tv show.  I was so impressed with her Venetian Carrot Cake that I looked it up online and bookmarked it.  It was surprisingly time consuming.  Squeeze the moisture from the grated carrot, simmer the sultanas, toast the walnuts.  I foolishly decided to substitute walnut oil for the neutral oil.  And I used walnuts in lieu of pine nuts but didn't read that they were to be scattered on top. 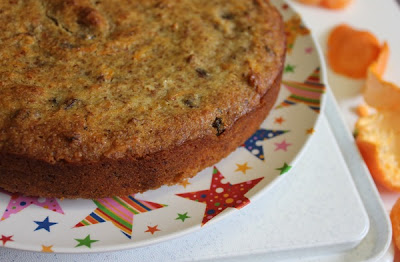 Never mind.  The cake was rather good but oh so very rich.  So intense that I took along a tub of ice cream.  Sylvia ate her scoop of ice cream and told me that the cake was yuk!   Fran and John were far kinder.  It was a very very moist cake that refused to slice into nice neat wedges.  Looks aren't everything, though! 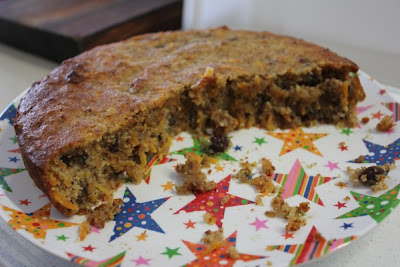 Speaking of the appearance of baked goods, let me tell you about the biscuits (ie cookies) I baked this week.  I had bought a jar of sunbutter to see if Sylvia liked it as an alternative to peanut butter.  She didn't and neither did I.  Who can blame her when she has had a peanut allergy from such a young age that she has never been able to learn the joys of peanut butter.

Sylvia likes to go to the supermarket and pick up items and ask me to check if they have peanuts in them.  We talk about her allergy to peanuts.  Sometimes she asks why she has an allergy.  I don't know.  I am just thankful that her reactions have not been life threatening. 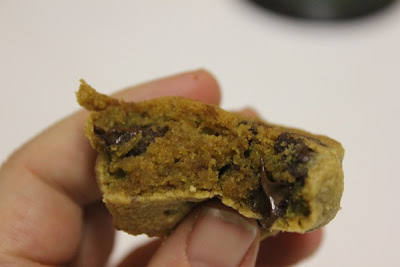 Left with a jar of sunbutter, I thought I might seek out some recipes.  The first one I tried was a gluten free one using coconut flour.  It was interesting to see how the batter thickened after I left the coconut flour to rest as directed.  The recipe also noted that the lemon juice was also to stop the biscuits going green, because apparently sunbutter can do that to a biscuit.   I added the lemon juice as directed.

When the biscuits came out of the oven they looked normal (above).  They tasted great.  Once they cooled I tasted another (for research).  I was surprised to see they were looking rather green around the gills (below).  How odd! 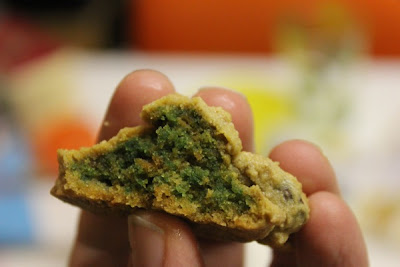 Even stranger, as the days went by they became greener.  Below is a photo taken a day after I made them.  What weird alien ingredients are in sunbutter!  Surely sunflower seeds can't do this!

I had thought this might be a good recipe for people I know who are gluten free.  But I just don't feel I could hand them around without a lot of uneasiness.  E wasn't keen on the green.  Either was Sylvia.  My mum was lukewarm.  Fran and John quite liked them.  I liked them but they were quite cakey and got even softer very quickly over a couple of days.  Perhaps if I had read the recipe and flattened them before baking they might have been crisper. 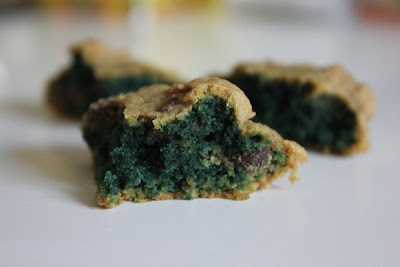 This week I went out again to see Fran and I took the last couple of the biscuits for tasting.  I also made a batch of chocolate macaroons and chickpea crackers to nibble on as we chatted. No need to put Stella to sleep this time.  She slept like the proverbial baby!

NOTE: A word of warning to those who want to make these sunbutter biscuits for others with nut allergies.  I always thought that seeds were a good alternative to nuts for allergy sufferers.  However I checked with a friend of mine whose son has far more severe allergies than Sylvia.  He is also allergic to seeds too.

Cream butter, sunbuttter, and coconut sugar. (I did this by hand.) Beat in egg, vanilla and lemon juice.  Add coconut flour.  Let mixture sit for 5 minutes.  Stir in bicarb soda and then choc chips.  Drop spoonfuls onto a lined baking tray.  Flatten.  Bake at 180 C (350 F) for about 9 minutes or until golden brown.  Cool on the tray.

You will need a bit of time for preparation of ingredients - grate carrots and squeeze as much moisture out in a two layers of paper towel; dry fry walnuts; and simmer sultanas in orange juice for 3 minutes.

Using electric beaters, beat some air into the oil and sugar, then add vanilla and eggs and keep beating until yellow and creamy.  Gently fold in carrots, walnuts, sultanas and juice, almond meal, nutmeg, lemon zest and lemon juice.

Bake for 30-40 minutes until a skewer inserted in the centres comes out sticky but clean of uncooked cake batter.  Keeps 5-6 days and may be frozen.

On the Stereo:
Stone Roses
Posted by Johanna GGG at 10:36