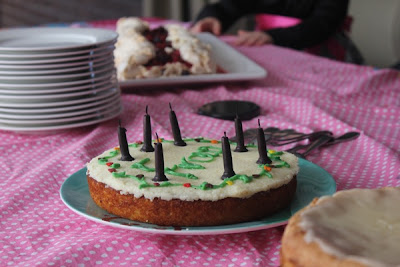 On the weekend, Sylvia and I had lunch with the family.  It was my sister Fran's birthday but it was me who had the new toys.  Most excitingly, I have a new macro lens for my camera.  (For those who care, it is a Sigma 50mm F2.8 DG Macro.)  I have been having a lovely time playing with it.  In fact I want to just leave it on my camera.  It is brilliant for baby photos.  But sometimes I need to look at the big picture.  You just can't fit all my family in with a macro lens. 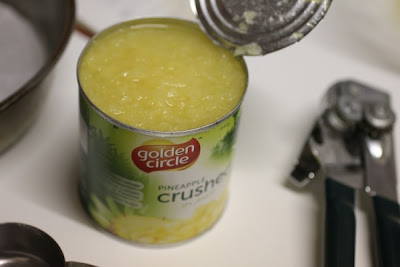 While idly pondering the We Should Cocoa theme of cocktails, I decided on the cake I was to make.  It is the 2nd birthday of the event.  Choclette set the hard task of a cocktail-inspired chocolate creation.  Once upon a time it would have been easier.  As a young student I was quite keen on cocktails until I realised my budget wouldn't stretch the far and I taught myself to drink beer.

Back then I was as excited by trying weird and wonderful cocktails as I now feel about new food.  I couldn't resist the lurid colour of the Blue Lagoon.  At nightclubs we used to joke about ordering Sex on the Beach, though I can't remember if we ever did.  College cocktail parties included the likes of Black Russians, Harvey Wallbangers and Grasshoppers.  The local pub made an impressive looking drink called a Sunrise (or was that Sunset?) and a notoriously strong and very red Rocket Fuel. No wonder when someone couldn't hold down their drink, we called it a "technicolour yawn".  Among the drinks that I used to enjoy was the pina colada. 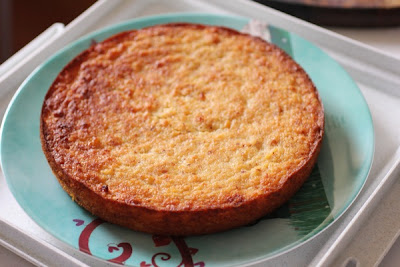 The pina colada traditionally involves rum, pineapple juice and coconut milk.  Lately I have been putting coconut in everything.  It didn't seem so odd to put it in a Crunchy Topped Pineapple Cake recipe that I have had for years.  I knew it was a moist cake because I once baked it in my mum's wood oven.  The temperature was all wrong and the outside was black but we tore out chunks of cake from the insides that were delicious.

The original pineapple cake has a crunchy walnut topping. Not after my change.  Firstly I made it gluten free.  I substituted equal parts of dessicated coconut, ground almonds and gluten free flour for the plain white flour.  I decided to top it with a white chocolate and cream cheese frosting.  After all pina colada often has a creamy topping.  Unable to keep from meddling, I also added coconut to the frosting. 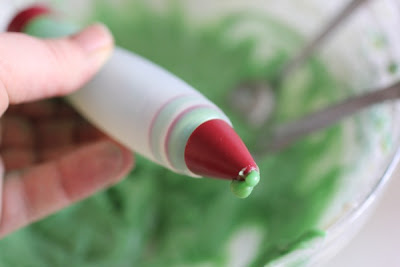 This cake did not just have frosting.  It was also an opportunity to try out my new icing pen.  I am still not the most competent driver but it is one of the easiest tools for writing on cakes.  I chanced upon a flower decoration around Fran's name.  It was inspired by a doodle I found myself drawing on an agenda while at a staff meeting last week (proving that staff meetings aren't a waste of time)! 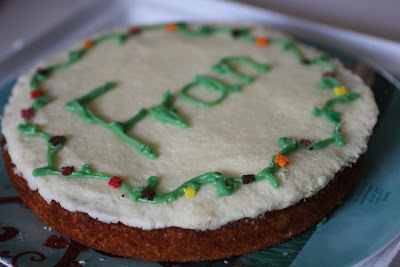 We had sausage rolls (more about these later), a Mexican feast, Mum's sponge, John's berry pav and my cake.  Tough competition!  Yet I was very pleased with the cake.  The texture was fantastic - moist, fruity and a little coconutty.  (E wasn't so keen on it.  Perhaps that is because he didn't grow up eating heaps of coconut baking like we did.)  I thought the icing tasted like condensed milk and coconut.  I can't give higher praise than that.  Then a little cream cheese flavour sneaks in. 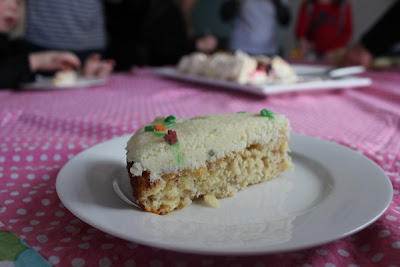 After lunch, we cleared the table and I brought out my craft box.  Sylvia and five of her cousins each made an octopus out of a toilet paper roll.  Inspired by this craft octopus.  We glued coloured paper around the toilet paper rolls, glued on googly eyes, let the kids decorate them and then I cut out legs at the bottom with zig zag scissors.

I worried at supervising six kids with scissors and glue.  But it all remained under control.  They all had a great time.  The older kids were more sophisticated in their decoration and helped the younger kids.  (My dad also helped to supervise.)  I love how each kid had their own style.  Sylvia had five eyes on hers.  Maybe it was an alien octopus.  Lots of mess and chaos but even more fun. 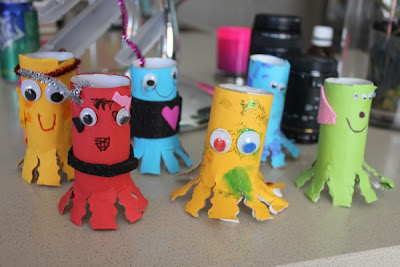 The cake is not overly chocolatey.  I am not sure anyone would guess the chocolate in it but it would not be the same without the white chocolate.  It gives the frosting a divinely creamy texture.  This is a gluten free cake that is worth repeating.  Not a huge cake.  Yet it is packed with the flavours of summer and holidays.

To make cake: combine all ingredients in a mixing bowl.  Pour into a lined and greased 20cm tin and bake at 180 C for 50 minutes.  Cool on a wire rack.

To make frosting: Melt white chocolate in the microwave (you can do it on the stovetop but it will probably get hotter and need a little cooling before proceeding to next step).  Stir in butter.  I find that this cools the white chocolate and helps the butter in corporate by melting it.  Now add cream cheese and beat with electric beaters.  Gradually beat in icing sugar.  Now transfer a generous cup of the frosting into a small bowl.  Mix about 1 cup of coconut.  It should be quite a thick mixture.  Spreak on cooled cake.  Use remaining frosting to decorate if desired.  (NB I added quite a lot of icing sugar to the remaining mixture to pipe decoration because this helped it firm up.)