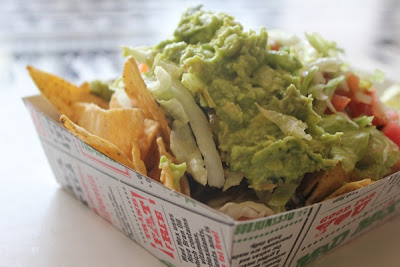 Finding decent food at the old food court at Melbourne Central Shopping Centre wasn't easy.  The revamped food court that opened there late last year, is an improvement. I have recently discovered Mad Mex is one of the bright stars in cheap and cheerful meals.  (Yeah, I know! I am not the first.)  It seems like a good opportunity to share some Melbourne Central photos and reflections,  But first let me tell you about Mad Mex.

A franchise that started in Sydney, Mad Mex is an impressive offering compared to the usual food court fare.  It serves fast, decent Mexican food that is full of vegetables.  Even the space is unusually charming for a food court.  They not only have plants but an eye-catching chandelier made of corona beer bottles. 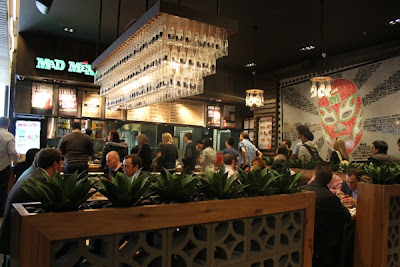 There are also queues.  Not surprisingly.  What is unexpected is the speed at which the queue moves.  And you need a little wait to choose your order.  Because once you arrive at the counter you speed by three or four staff all giving you options and piling your meal high.

There are three sections of the menu 1. The base - tacos, nachos, burritos quesadilla etc.  This also includes basics like black beans, lettuce and sour cream.  2. The filling.  For me that is vegetariano - a mix of zucchini, eggplant and mushroom.  It comes with free guacamole (which costs extra with meat fillings).  3. Lastly you choose the salsa.  Tomato, tomatillo, corn etc.  That's a lot of food. 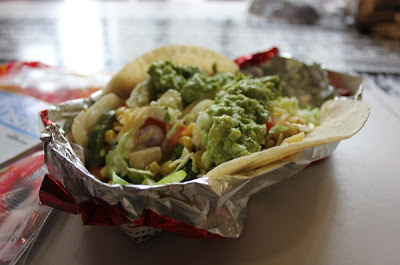 On my first trip I chose the soft tacos (above).  The photo does not do them justice.  They were fantastic, satisfying and very very filling.  Initially I had thought I might eat them with my hands but that was too challenging.

On my second visit I wanted something different.  I chose nachos (top photo).  After my initial experience this was disappointing.  Yet understandable.  This is fast food.  Instead of the nachos being baked or grilled to create a delicious marriage of melty cheese and crisp corn chips, these corn chips have some thin melty cheese sauce poured over them.  (Perhaps the grated cheese would have been better than the melted cheese sauce.)  However, with all the vegetables, these weren't as heavy as usual. In fact they were rather good. 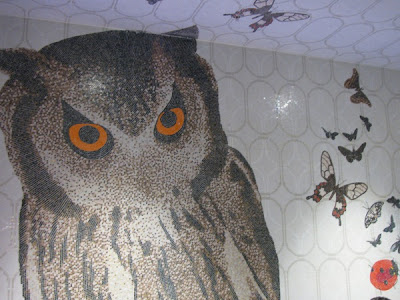 The new incarnation of the Melbourne Central Food Hall has more sunlight and more decoration than the previous grim dark space.  It makes for a far more pleasant place to eat.  That is, if you don't mind the stern stare of this giant owl that looms over the dining tables. 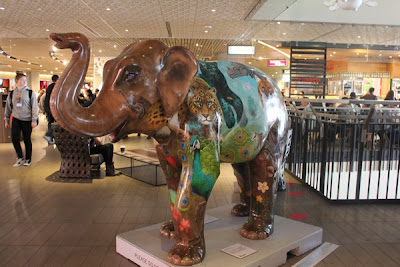 Far more cheerful are the elephants.  Well I only spied one inside Melbourne Central near the food court.  There is another outside near the corner of Swanston and LaTrobe Streets.  This is part of the Mali exhibition of 150 decorated elephant statues to celebrate the 150th anniversary of the Zoo.  (They are in the city until 21 September when they move to the Zoo.)  Bringing art into public spaces is one of the changes of which I heartily approve. 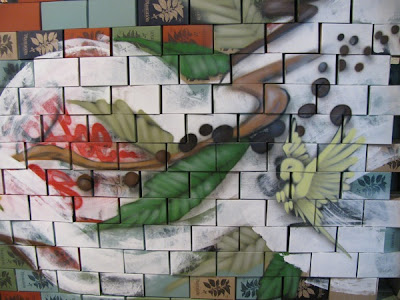 I took this above picture of a decorated wall by the food court back in December.  I am not sure if it is still there.  Even then, there was some graffiti on the wall.  I also took the below photo of the red heads below at the same time.  This is a very striking sales display, though I am never sure what they are selling.  (A quick web search suggests it is a Pioneer shop called Volume.) 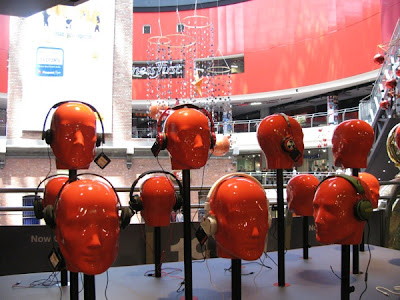 I am less familiar with stores in Melbourne Central than I used to be.  I remember the Shopping Centre being opened in 1991.  What I remember clearly is the fascination at the historic shot tower (below) being encased in an industrial-style glass cone.  Since then I have seen stores come and go.  I used to enjoy wandering through the Japanese department store, Daimaru, browsing the cookbooks in Borders and eating cinnamon scrolls from Saint Cinnamon.  All gone. 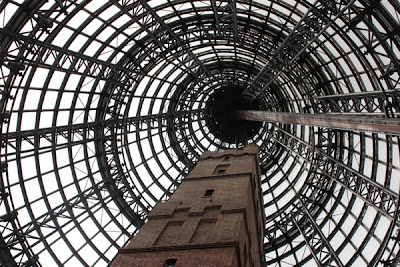 In fact I used to love taking visitors through the city from Melbourne Central, through Myer, along Royal Arcade, The Block Arcade and then through Centre Place and Degraves Street into Flinders Street.  Sadly these days, not only is Melbourne Central much changed (though they still have the silly giant fob watch with the tinny version of Waltzing Matilda on the hour) but you can't walk through Myer any more. 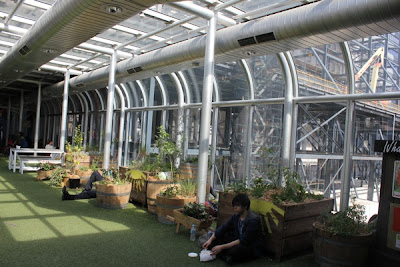 Above is what used to be the walkway between Melbourne Central and Myer Department Store.  I miss being able to bypass Lonsdale Street in this way.  Now it is called a Community Kitchen Garden and you can gaze out the window at the remaining facade of the Myer's Lonsdale Street building and the building works going on around it.  It has even gained some recent notoriety as the site of the most recent clash between unions and big business. 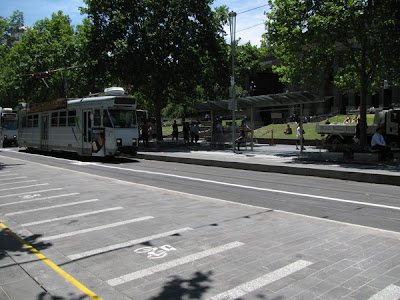 Melbourne Central has come a long way.  It has even taken over the name of the railway station in its bowels, formerly known as Museum.  Outside on Swanston Street, the mega tram stops have appeared (with new barriers since I took the above photo in December) and the renovated State Library has taken over the part of the building that used to be the Museum.  It makes me feel old to look back over the change I have seen.  Yet I am also pleased that Melbourne continues to interest and fascinate.