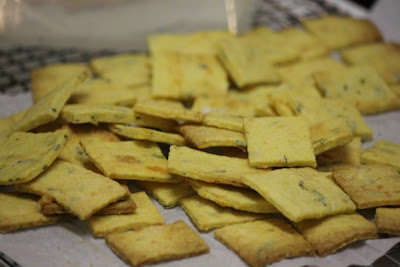 It has been a week of misadventure.  The easiest way to tell you is to share what I have learnt.  If a fire starts in the back lane, call the police.  If the traffic jams are horrendous, park the car by the pool, walk home and pick up the car later.  If you are changing the camera lens, make sure it is firmly screwed in before picking it up.  If your 3 year old has a new stick of lip balm, keep her away from the computer.  If dinner is late, make crackers.  If you are visiting a farmers market, keep an eye on Dolly. 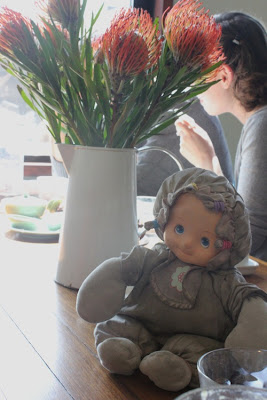 Regular readers of this blog will be quite familiar with Dolly and her hijinks.  She has been sister, friend, baby and constant companion to Sylvia for almost 2 years.  That is forever for a 3 year old.  Much easier to understand than the idea that Dolly is lost and gone forever.  We looked and looked and retraced our foosteps countless times.  We asked around and found a number to ring.  Finally we went home empty handed.

We are all very sad without Dolly.  She might have been so naughty on occasion that she had to be sent out of the room, but she made Sylvia so happy.  She would wait in the car for Sylvia to come out of child care and it was a joy to see my little girl's face light up as She saw her Dolly.  She snuggled up in bed with Sylvia last thing at night and bounced around with her first thing in the morning.  She helped put chia seeds in the smoothies, she banged on the computer, she jumped up and down, she had hair ties in her bonnet, and she made funny baby noises.  She will be missed. 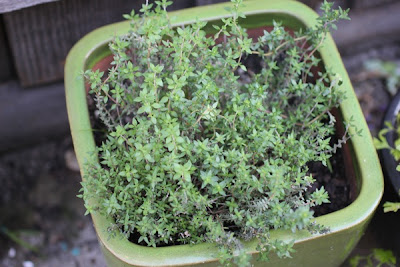 Perhaps it was the need of comfort that finally made me bake these Polenta Parmesan and Thyme Crackers from Fuss Free Cooking that I recently bookmarked on Pinterest.  As soon as I saw the recipe I knew I needed to make them.  I had bought Parmesan and not used it as intended.  The thyme is going crazy in the garden.  And I just love polenta. 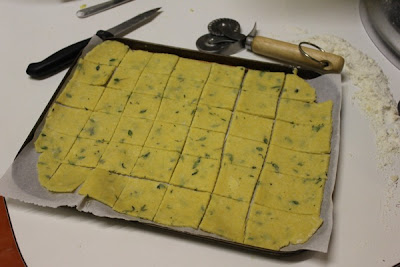 The recipe was quite easy once I managed to get all the groceries away, and got Sylvia's dinner and had told our neighbour about why there were firemen stomping through our kitchen late at night.  Like everything in my life, they took longer than intended. 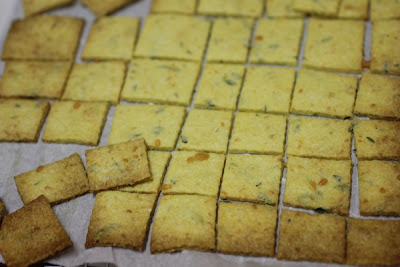 I love make crackers but often find that they don't get really crisp.  These did.  In fact the golden brown ones at the bottom of the photo look overcooked.  Yet they were the crispest.  I took mine out a couple of time, even forgot some while taking photos, and they were far better for a bit of colour. 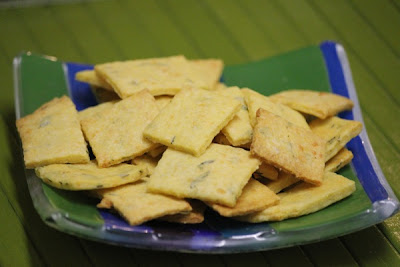 I am sending these crackers to Jacqueline of Tinned Tomatoes for Bookmarked Recipes, an event founded by Ruth's Kitchen Experiments.

Mix all dry ingredients in a medium large mixing bowl.   Add olive oil and integrate with dry ingredients - ie break up clumps as much as possible.  Gradually stir in water until mixture comes together into a ball of dough.

Knead dough with some flour until you have a supple ball of dough that is neither too dry nor too sticky.  (NB I used a bit more flour than I needed and had to add a little extra water to make the mixture supple again, so I advise only using a small amount of flour unless your dough is very sticky.)

Cut dough into two pieces.  Roll out one half of the dough as thinly as possible (no more than 1/4 of a cm) with a rolling pin and a little flour.  Then cut into squares or whatever shapes you fancy.  Repeat with second half of the dough.  I rolled mine on a sheet of baking paper, cut the squares and then transferred the crackers on the baking paper onto a baking tray.

Bake for 10-20 minutes until golden brown around the edges.  (I think it took me 20 minutes but I had to return them to the oven a couple of times.  It took Emily at Fuss Free Cooking about 7-10 minutes - I am sure her oven isn't as slow as mine).

Cool on a wire rack and keep in an airtight container.

Update 7/10/2012 - I made these again with chickpea flour instead of white bread flour and added a tbsp of pysllium husk powder - the mixture was a little more fragile but basically worked just as well.  Crackers were great and gluten free.

On the stereo:
A short album about love: The Divine Comedy
Posted by Johanna GGG at 23:15