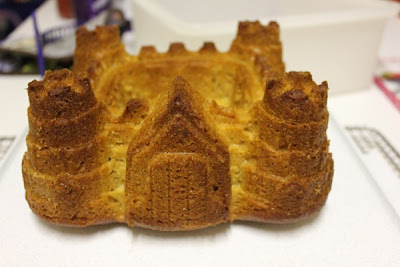 When I was planning the three cakes for Sylvia's birthday last week, I kept it simple to try and keep my sanity intact.  For a cake to take to Sylvia's child care, I decided to use a cake mould.  I usually make plain cakes and slice them into the shape I want (as I did for her third cake).  A mould however seemed a great shortcut.  It was a present from Paula after I had admired her son's birthday cake. 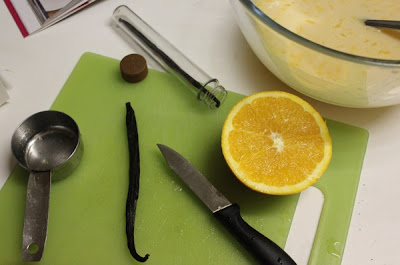 I am always a little nervous about baking for children that I don't know.  They like plain.  I do not.  Using the cake mould presented an even greater challenge because chocolate would be too dark to show up all the details.  I have 76 cakes in my index and over half of these are chocolate.  Kids also love icing but I didn't want to cover up the details, and by the time the cake went in the oven on the night before taking it to child care first thing in the morning, I wasn't sure I had time for it.  And then there is the dilemma of wanting kids to be excited about a cake but not wanting to feed them unhealthy food. 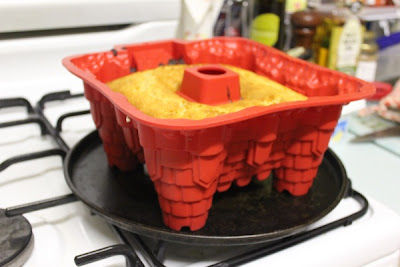 If I had a plain cake recipe that I loved, I would have made it.  Instead I search for something that wouldn't offend kids but would interest me.  I found it in a book that I received for my birthday called Have your cake: no butter, no white flour, no added sugar.  The recipes are appetising but not as alternative as I had expected.  They use rice bran oil instead of butter, honey instead of sugar and wholemeal wheat flour.  Perhaps I have been hanging around bloggers like Ricki for too long, and expected more obscure ingredients such as carob, stevia and coconut oil. 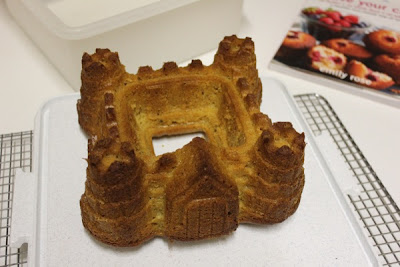 In Have your Cake, I found a recipe for a Butterless Butter Cake.  This was perfect for me.  It was butterless because it had oil instead of butter.  What I loved was the addition of coconut, orange juice and honey.  This gave it enough added flavour and added texture to please me but not too much for the kids. 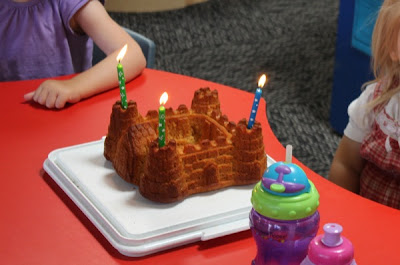 I went to child care to be with Sylvia when they had the cake.  My dad was able to come along too.  We loved seeing Sylvia with her little playmates.   They were very excited that it was her birthday and that she had a castle cake. 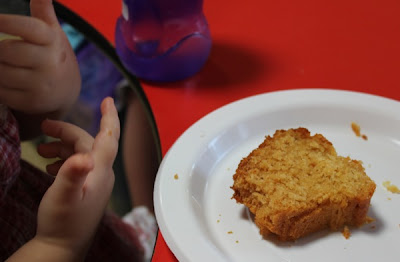 My dad commented on how every kid ate their cake in a different way.  It was eaten with a fork or with fingers, broken into chunks or crumbled, eaten delicately or eaten in great big bites.  Every one ate their piece.  Not one complained.  Some asked for seconds.

This is a cake I will be making again and I look forward to exploring more recipes from the book.  I am also excited by my new castle cake mould.  Paula tells me the first time is the easiest.  But I am game to try it again.  It just looks so cute with so little effort.  And most importantly, it made a birthday girl very happy!

I am sending this cake to Anjali of Spice n Sugar Tales for her Cakes, Cookies and Desserts event.

Previously on Green Gourmet Giraffe:
This time last year: Fast track pizza with sweet potato sauce
This time two years ago: PPN: Of birthdays, farewells, and noodles
This time three years ago: Welcome little one!
This time four years ago: My Friend the Chocolate Cake

Preheat oven to 180 C.  Grease and line a 20cm cake tin or if you have a cool silicone mould, just have it at the ready with no greasing or lining!

Beat eggs and oil until creamy (I used electric beaters).  Stir in honey until well combined.  Add in orange juice.  Scrape out the seeds of the vanilla bean and stir into mixture, pressing with a back of a spoon on the side of the bowl to break up any clumps.  Gently stir in dry ingredients.

Pour mixture into prepared tin.  Bake for 40 minutes or until a skewer inserted in the middle comes out clean.  Leave in tin for about 20 minutes and then turn out onto a wire rack.  NB I turned mine straight onto the cake container because I was worried the castle shape would collapse if I had to transfer it later.

On the stereo:
More Music to Watch Girls By: Various Artists
Posted by Johanna GGG at 23:49