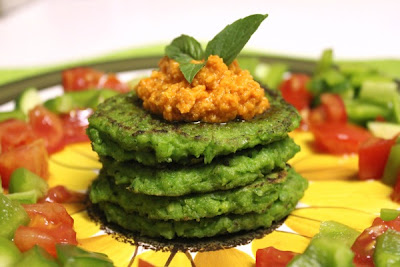 Shrove Tuesday this year was full of colour.  I stumbled across a bookmarked recipe for Pea Pancake recipe in the Guardian newspaper by Bruno Loubet.  It attracted me because it was green, cheery and gluten free.  I wasn't about to serve it with poached egg as he did.  Instead I served ours with a dollop of sun-dried tomato pesto and some salad vegetables. 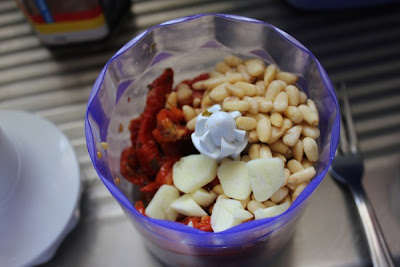 I had had great success with basil pesto shortly beforehand, but I didn't have any basil on hand and I needed a colour contrast.  I looked up a few red pesto recipes that were quite complex before finding a simple sun-dried tomato pesto recipe that didn't need lots of extra ingredients like basil and red pepper.  After all, I was looking for something because I wanted to use what I had on hand. 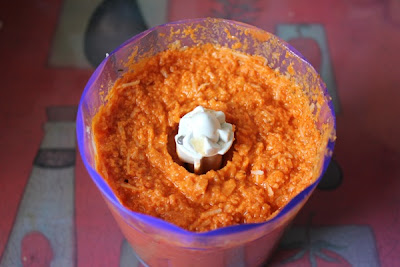 My pesto mojo is alive and kicking right now.  This was a fantastic pesto.  I didn't need much for the pancakes and had lots leftover.  It was lovely with pasta, on sandwiches or just stirred into some soup.  I loved the bright red colour.  It has a little oil sitting on the top of the batch but once it was creamy with lovely intense tomato, cheese and garlic flavours. 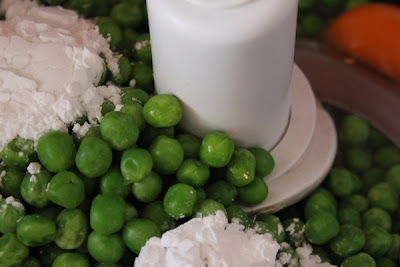 Once I had mastered the pesto I turned my attention to the pea pancakes.  Actually, once I cooked them, they were more like pea cakes (reminding me of these burgers that I have had bookmarked for some time).  If Sylvia had been well she might have been excited by the brilliant green colour.  As it was, she was too ill to care.  The poor wee thing sat on the couch falling in and out of sleep so our priority was to get her to bed as soon as possible. 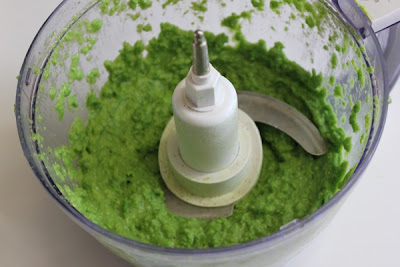 So that is how I can remember that these were a cinch to put together and cook.  Not only was she tired but she was grizzly and wanted me to carry her around.  Then we had the palaver of trying to get her to take some antibiotics prescribed by the doctor.  I had little time and energy to get dinner on our plates once Sylvia was fast asleep.  These pancakes were no bother at all. 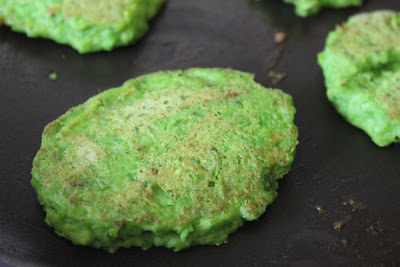 Making side dishes was a bit beyond me.  I had thought about making some cauliflower cheese and roast potatoes to serve with the pea pancakes.  It would have made it a really satisfying dinner with lots of leftovers.  Instead, I added a dollop of the red pesto on the pancake stack and scattered some chopped vegies around it.  Who was I kidding when I thought I might have time for anything more!  It was a very light meal and I found myself having a cracker or two later that night spread with pesto. 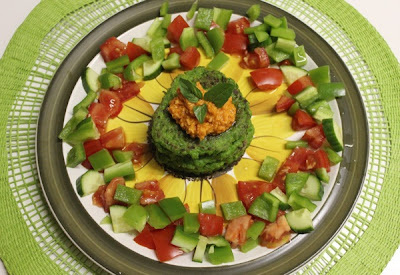 I am sending these pea pancakes to Jacqueline of Tinned Tomatoes for her Bookmarked Recipes event.

Place cooked peas in the food processor with cornflour, egg, a pinch of salt and a grind of pepper.  Blend, scrapping down the sides once or twice.  This took me a few minutes.  Check seasoning and if you need to add some more, blend again and check it is too your liking.

Heat a frypan and melt a small knob of butter on the hot pan.  Drop dessertspoonfuls in the pan and spread out a little with the back of a spoon.  Relax, talk about the day at the office, flip over when dried out a bit.  Chop some vegies and check the other side.  They should be a lacy golden brown but still soft inside when cooked.  Serve hot or I think they would be nice at room temperature.

Blitz sun-dried tomatoes, pine nuts and garlic.  Add oil and parmesan cheese until well blended.  The recipe said to drizzle the oil but that wasn't possible in a little blender like mine and it didn't seem to matter.

On the Stereo:
Set List: The Frames
Posted by Johanna GGG at 20:29