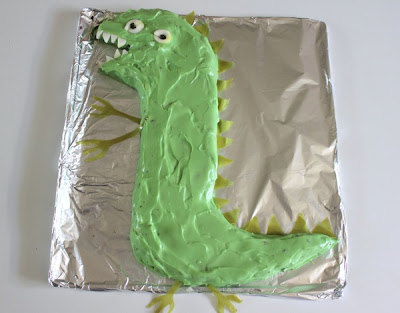 After making two 'plain' cakes for Sylvia's birthday I finally made a chocolate mud cake, which is far more my sort of cake.  It was the most challenging of her three birthday cakes.  I shaped it into George Pig's dinosaur from the children's cartoon, Peppa Pig.  Sylvia loves Georgie Pig.  More importantly, a cartoon figure is so much easier to cut out into a cake when busy. 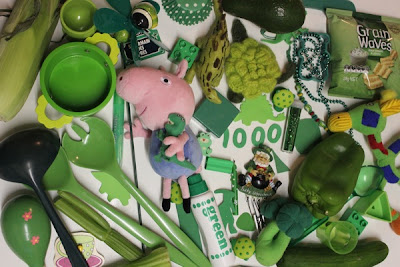 If you don't know Georgie Pig, he is very attached to his dinosaur and is frequently heard to say "Dinosaur, Grrr).  You could see pictures of him and his dinosaur here or here or you could find Sylvia's new George pig toy in the above picture.  Actually it is a self indulgent green photo that I did to celebrate this being my 1000th post since starting my blog in 2007.

But enough about me, let me tell you about the cake.  I thought it would be easy to find guidance to making a Dinosaur cake from Peppa Pig.  The best I could find online was this photo.  So I just used images on the web to guide my drawing of a template.  I made the cake gluten free for the celiacs in my family.  A GF mud cake made for a very fragile crumbly cake.  Many others would have be sturdier but perhaps not tasted quite so good.  However it did make life more difficult when rushing to make the cake and Sylvia suddenly changing her mind and deciding she wanted a pink cake.  I finished it at 12 when I had told people to arrive.  Fortunately everyone was late! 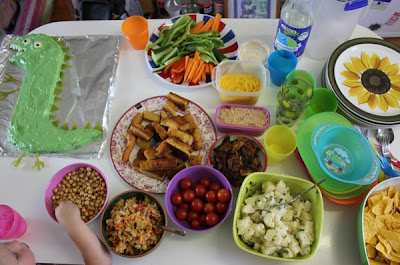 As always I overstretched myself on the food.  Entertaining always means lots of leftovers in our house, which is just as well because I usually am happy not to cook for a few days afterwards.  The menu was: 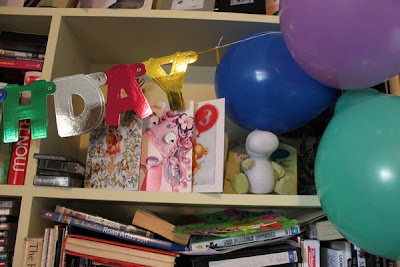 Unlike last year when Sylvia's birthday party was on a rainy day, this year it was on a hot 34 C day.  Which perhaps would account for the fights over Sylvia's cash register so it had to be taken out of circulation.  I am not great at party games, nor is Sylvia.  For entertainment I threw the kids a bag of balloons and asked them to blow them up.  My niece Ella managed to let go of a balloon that flew into the cake!  While the kids played, the adults talked politics because the leadership challenge for our Prime Minister was looming. 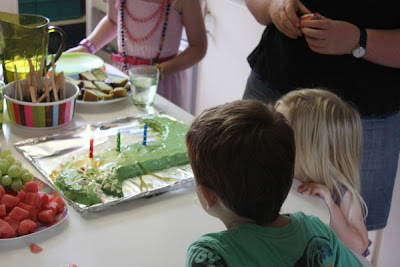 Keeping Sylvia away from her birthday cake before we lit the candles and sung happy birthday was a challenge.  Once she had blown out the candles, she found that the cake was the same height as her mouth and she could easily bit into the nearest edge!  I think she might have had visions of chomping through the whole cake before I stopped her.  Whereas her cousin Cooper just wanted a piece of cake with teeth.  The cake went down very well but we had a lot of that cake leftover and lots of scraps are still in the freezer.  So long as there is cake and kids about, Sylvia is very happy and had a lovely time.

Melt white chocolate in the microwave in a small heatproof bowl.  Stir chopped butter into white chocolate until it melts and is well mixed in.  Use electric beaters to beat in cream cheese and then gradually beat in icing sugar.

How to Make a (Peppa Pig) Dinosaur Cake

What you will need:
What to do: 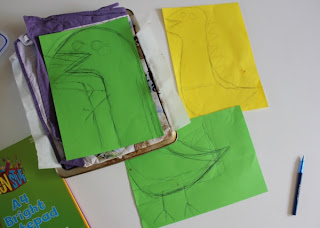 Firstly take a pen and paper and draw a stencil to get the right shape.  An A4 sheet of paper fits on a lamington tray nicely but I found that two pieces helped me to view it as the cake would be. 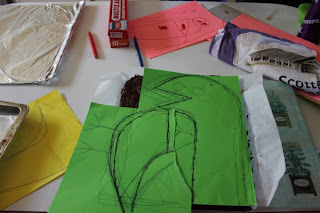 I fitted both pieces of paper onto the cake and used a skewer to make dots around the outline.  Once these were done, I took the paper away and used a sharp knife to join the dots and draw the shapes in the cake. 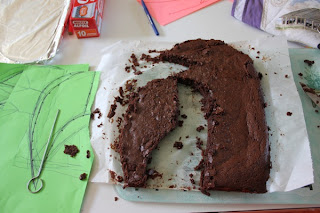 The I cut out the shapes with my sharp knife.  I then had help from E to use egg flips to transfer the cake from the baking paper to my large baking tray covered in foil.  A sturdier cake would have been easier to handle.  Brush away as many crumbs as possible before frosting. 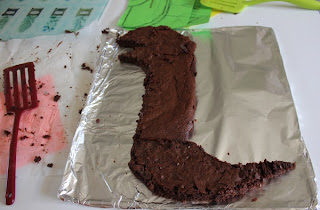 Spread the frosting over the cake.  Cut out white teeth for the mouth and use white circles to do the eyes.  Pipe a dark dot in the middle of each eye.  Cut the fins, arms and legs out of the green lollies and push them into the icing on the side.  If I had the time and patience I might have piped an outline around the cake (or used thin strips of fondant) but I am no expert at such fancy work at the best of times.  Place the candles in the cake and serve with lots of fruit and sweet food. 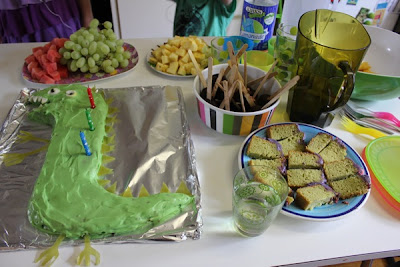 Chele has kindly commented that this cake would be welcome in the We Should Cocoa event this month.  The challenge is to create something green with chocolate in it.  (Hey I already did that last month!)  I'd been dreaming of some other green delights but a bird (or dinosaur) in the hand is worth two in the bush!

On the stereo:
A Short Album about Love: The Divine Comedy
Posted by Johanna GGG at 23:08