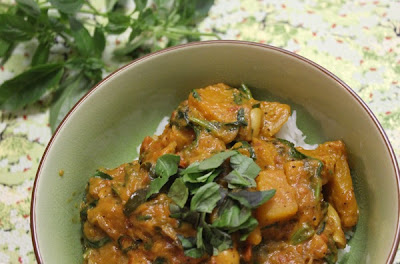 I've never got on the Skye Gyngell bandwagon.  There was never any reason to.  Not until Lucy wrote up this Tomato and Pumpkin Curry with Lime and Coconut.  Though I fancied the recipe, it was really the serendipitous arrival of curry leaves in my kitchen that prompted me to make the curry.  I loved the way that Skye wrote the recipe which has prompted me to reflect on some of the copyright discussions going on in the blogosphere lately. 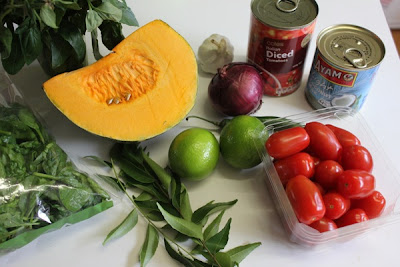 My mum was at my place and needed to take curry leaves along to the centre where she volunteers in the kitchen.  I gave her the last of my (much neglected) stash in the freezer and in return she brought me some from her garden.  She also brought along some basil and parsley.  It seemed foolish to go out and buy fresh coriander (cilantro) which I don't like anyway when I had fresh herbs in the house already.  So began my tweaking of the recipe. 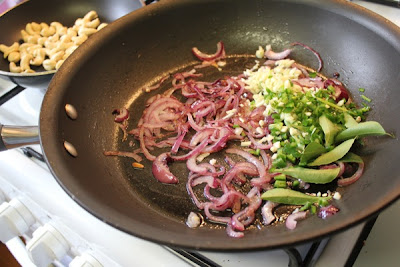 It seems a good a time as any to bring up the thorny issue of copyright and recipes.  It has surfaced in a few posts I have seen lately.  Vanessa Kimbell (who recently became a published cookbook author) has posted a blogger code of fair practice that includes only posting recipes where bloggers have requested permission to use them.  Lucy of The KitchenMaid has removed a recipe upon request due to copyright issues.  And Amanda of Lamb's Ears and Honey has boldly refused a request to remove a recipe on the grounds that she has not breached any copyright issues.  All posts (with their comments) make fascinating reading.

I have spoken before about where I stand on recipes and copyright.  I have seen a few furores about copyright during my time blogging. Not Quite Nigella and ACP, Alosha's Kitchen and America's Test Kitchen, and Monica Gaudio and Cook Source.  I have also recently stumbled across a photographer who is grappling with copyright issues and Pinterest.  In fact I thought I would never finish this post because I keep getting drawn into fascinating posts and comments.

[Update: I've found two more interesting links since uploading this post - BlogHer article on Elise Bauer of Simply Recipes finding her blog content made into an e-book for sale on Amazon and reflections on Pinterest by Meeta on What's for Lunch Honey. And I found one positive one at The Window Seat about Pinterest's changes.] 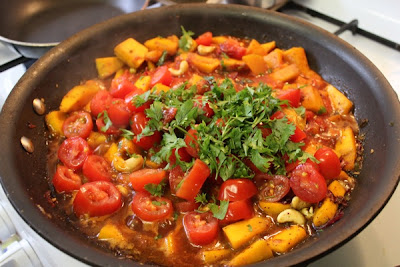 One of the best pieces of advice about food blogging copyright issues that I have found is on recipe attribution by David Lebowitz.  To summarise the law as I understand it: you cannot copyright a list of ingredients but you can copyright creative expression in how a method is written.  As Jennifer Geuvin puts it so nicely "Sharing recipes is, after all, part of the tradition of cooking. But sites are still struggling with defining the line between what's acceptable or even beneficial copying, and what's damaging their brand or profits."  Recipe copyright feels like tradition and technology colliding ever so awkwardly. 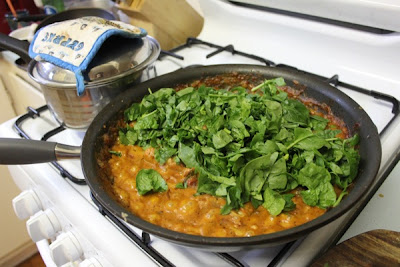 This whole copyright debate seems to be about more than the law.  It seems to be about moral rights as well, which I think is a murkier area to dabble in.  Whatever the law, argue some, you will be taking away a cookbook writer's income by reproducing recipes.  I agree, however, with those who say that blogging can promote a cookbook.  I actually discovered Dan Lepard (who is central to much of the recent debate) through blogging.  However I think part of the issue is that the internet has changed how we share information and for every person like myself who wants to abide by copyright law, there are many more who just don't care.  Though I don't know that there are many people who would - or could - find all the recipes from any one cookbook on the web rather than buy the book?

For me, if I read about a recipe on someone's site I really want to see their version of the recipe.  Which doesn't mean that I wont go to the original recipe and might even buy the book.  This brings me in a roundabout way to Skye Gyngell's recipe for Tomato and Pumpkin Curry with Lime and Coconut.  When I read about it on the KitchenMaid, I was curious to know how Lucy had adapted it, especially as she lives in my region and uses different pumpkins to those that Skye has access to.

I also can't help but think that it must be frustrating to get a recipe just right, only to find someone like myself who doesn't eat fish sauce, doesn't like coriander, has access to different pumpkins, wants to bump up the protein with nuts, prefers to add the spinach in the curry rather than on the side and just doesn't follow the method.  Every now and again in this sort of situation, I question if it is even the same recipe but I like a recipe to have a heritage even if it sometimes looks quite different to the original. 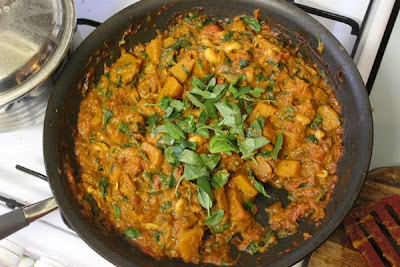 I don't think that my recipe was quite as successful as Skye's because E had to eat bread with his because it lacked something.  I didn't manage to get the balance of flavours quite right but it was close enough for jazz (ie very good if not excellent).  The aroma while I cooked was amazing.  It was one of those pleasant early autumn evenings where it was a joy to potter in the kitchen while E and Sylvia sat on the verandah and played with coloured beads for the spokes of the bike wheels.  E did call the meal a "tightener" because it was very filling.  It was also pleasantly spicy from the fennel and mustard as well as the chilli.

The recipe made me think I could become a Skye fan as much for her wonderful way with words as for her interesting flavours.  I wish I could write so eloquently that people delight to read it - for example: "The curry should be pleasantly (not aggressively) hot; sweet (but not sticky); sour (but not so much that it makes you squint); and salty enough to underpin and ground the dish."  Such lyrical writing makes sense of copyright laws.  Of course if I copied out this recipe word for work, I can understand why it would be frowned upon.  But I hope you will agree that I am entitled to share my below version of the recipe.

I am sending this curry to Ricki for her Wellness Weekends event.

Dry fry fennel and mustard seeds in a small frypan over medium heat until the mustard seeds start to pop.  They will be quite well cooked and fragrant by then.  Use a pestle and mortar to grind the seeds.

Now add sugar, soy sauce, umeboshi vinegar (if using), and lime juice.  Taste to check for a good balance of hot, sweet, sour and salty.  At this stage I wouldn't do too much adjustment to the hot and sweet flavours because they will be affected by tomatoes and coconut but check it is sour and salty enough.

Now add both the fresh and tinned tomatoes and cook for about 20-25 minutes until the pumpkin is tender (I did 20 but probably could have had the pumpkin a little more cooked.)  Stir in the coconut milk.  As my pumpkin was needing to cook a little more I also added 1/2 cup of water and I then simmered it for about 15 minutes (longer than in Skye's recipe).  A few minutes before it is ready, throw in the spinach so that it wilts in the curry.  Once pumpkin is cooked, turn off the heat and stir in a handful of basil leaves.

I served the curry with rice but I think it would go really well with rice noodles too.  Serve with a few torn basil leaves scattered on top.  Skye advises letting it sit overnight for the flavours to mature but I served it straight away, though the leftovers were lovely the next day.

On the stereo:
This is the return of cult fiction: 30 classic film and tv themes - Various Artists
Posted by Johanna GGG at 23:31