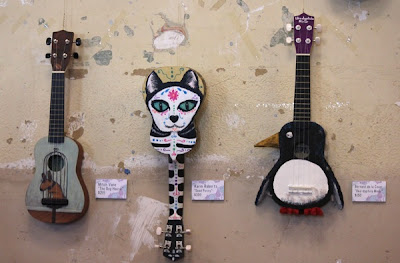 Monday was the Labour Day long weekend in Melbourne.  It started at the Melbourne Ukelele Festival on Saturday morning.  We saw a few interesting performances - loved the washboard accompaniment to one band and hearing Creep accompanied by ukelele - and I loved the ukelele artwork.  The star of the show for me though was being in the Trades Hall Building, an apt place to reflect on exactly why we were celebrating Labour Day. 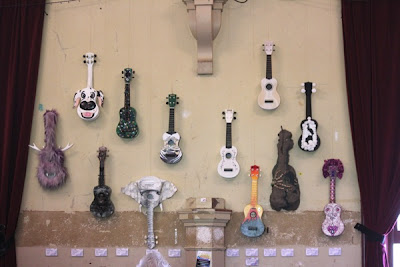 When Kari recently posted about International Women's Day and asked what would be our wish for future generations, I piped up with "remember our history".  I have written about this before.  I would also say the same for the union movement.  Too often I see people taking what we have for granted.  Yet I fear that Edmund Burke was right when he said "Those who don't know history are destined to repeat it." 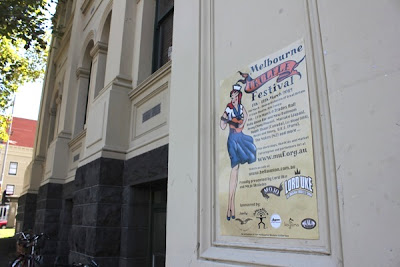 Not only do I love history, but I love the way it is reflected by our built environment.  Trades Hall is a great example.  It is one of Melbourne's grand old Victorian buildings.  In the top two pictures of the ukeleles in the Ballroom, you can see that the decor is a bit shabby, despite the red velvet curtains and the ceiling packed with .colourful flags  The place is very much alive though with conservation work being done in other parts.   it seems that there is work being done to preserve the building.  The grand staircase and list of the pioneers of the 8 Hour Movement are more newly painted than the Ballroom. 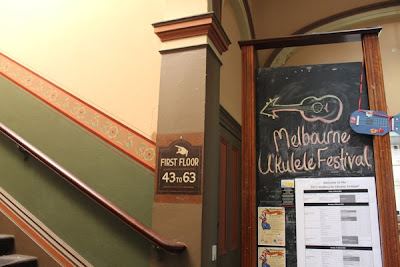 We need to conserve this building as a reminder of the Trade Union heritage, because it seems that unions' reputations have suffered in recent years.  They have been portrayed too often as aggressive and corrupt.  Last year, however, when I went through the process of developing an Enterprise Bargaining Agreement, I was very glad to have our union's support and very sad to see how few staff were members and yet happy to take the benefits of their advice and support. 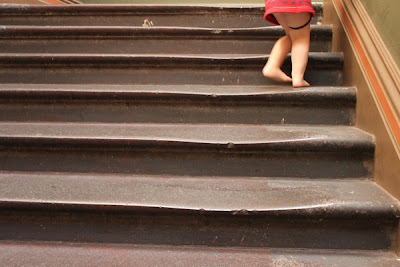 Much as I would love better working conditions, we have much to thank our forefathers in the unions for the conditions we enjoy today.  WorkChoices showed that we shouldn't take them for granted.  I am glad we have Trades Hall where we can remember these giants of the trade union movement in such a tangible way.  We can see their names on honour rolls, the hollows in the stairs where they have trod, and a giant picture of Gough Whitlam covered in lipstick kisses. 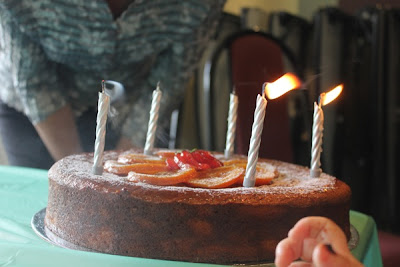 After the uke festival, we went to my friend Heather's birthday party.  Here is her cake.  It was a delicious flourless orange cake.  Sylvia had a tantrum over tomato sauce upon arriving but finally calmed down - if "calm" is the way to describe running non-stop around the tables.  E and I were very pleased to find lots of delicious food - spinach and ricotta pastries, rice paper rolls, chocolate tarts and a gorgeous fruit platter.  We had expected to find food at the uke festival but nothing was on offer and we had existed on some packets of roasted chickpeas. 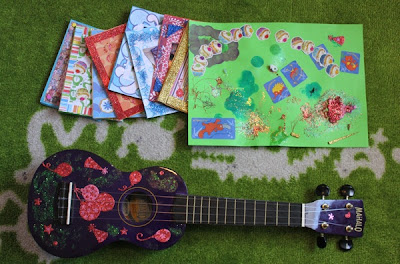 During the rest of the weekend we did a lot of craft.  We were inspired by the festival to decorate Sylvia's purple ukelele with some stickers and sparkles.  I worked on some cards while Sylvia did her own gluing, drawing, sparkles and stickers.  We managed to see two movies on DVD.  I loved the Descendants which was so amazing that the second film - Another Year seemed ho-hum in comparison.  We also visited my sister Fran and her husband John who have moved back to Melbourne. 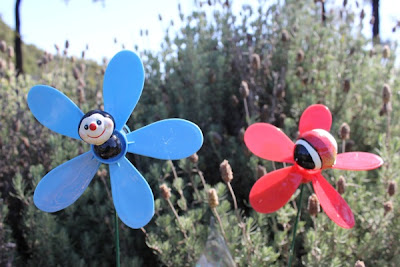 At the Ukelele Festival, E bought me a cookbook called What do Ukelele Players Eat? by Rose Turtle Ertler.  It includes recipes and reflections by ukelele players from around the world.  It even comes with a CD of their songs.  How's that for a quirky cookbook?  I liked one recipe for a pumpkin soup with white miso.  I also had lots of vegies to use as well as silken tofu just past the best-by date, a corn cob that Sylvia had rejected the night before and the last of my latest batch of tofu bacon. 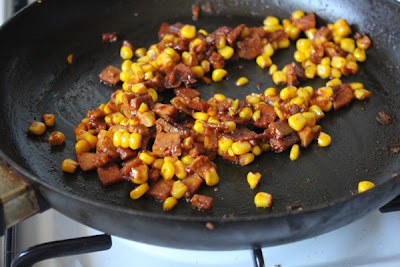 Those who have read my previous post about tofu bacon will be aware that this is my latest culinary love.  One problem I have with it is the lovely marinade that is leftover after I cook the facon (fake bacon).  I hate to throw out food, especially one with maple syrup that is quite pricey.  I struck upon the idea of adding it to the pumpkin soup.  After all it contains ingredients that I would happily use to flavour any soup.  The white miso complemented the flavours nicely.  It was a delicious creamy soup with a crispy topping.  Perfect for a relaxed long weekend. 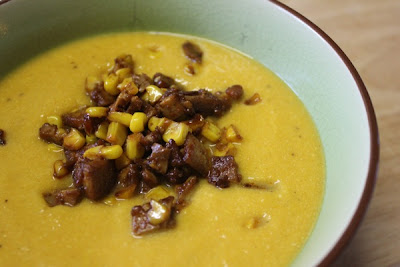 I am sending this soup to Souper Sundays hosted by Deb of Kahakai Kitchen.

Previously on Green Gourmet Giraffe:
This time last year: CC Dried fruit and coconut balls
This time two years ago: Awards, happiness, quicklinks and a conference
This time three years ago: Broccoli Burgers are Winners
This time four years ago: WHB: In Search of the Nectarine

Tofu and corn topping:
1 tsp oil, or thereabouts
*about 10 slices of uncooked tofu bacon (or as much or as little as you have or desire), chopped
kernels of 1 cooked corn cob

Heat olive oil in a large saucepan.  Fry onion, celery, carrot and parsnip for 5-10 minutes until soft.  Add garlic and stir into mixture about a minute.  Add pumpkin, tofu, water, bacon marinade and salt.  Bring to the boil and simmer for about 20-25 minutes or until vegies are soft.

While the soup is simmering, gently fry the tofu bacon in the oil and when it is starting to brown, add the corn.

When soup is cooked, turn off the heat and put a few spoonfuls of the liquid in a small cup.  Gently mix in the white miso until combined and return to the saucepan of soup.  Blend until smooth.  Serve warm with the tofu and corn topping scattered over the soup.

On the Stereo:
What do Ukelele Players Eat? - Various Artists
Posted by Johanna GGG at 10:26