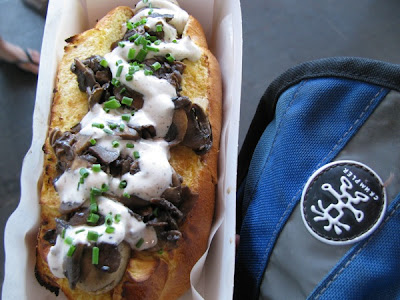 Update: Snag Stand is now closed in Melbourne but still seems open in other states.

When we went to the Children's Book Festival at the State Library (below) on the weekend, there wasn't much food on offer but the library is surrounded by places to eat.  One of the most convenient places to go was Snag Stand, which I had intended to return to, despite learning the hard way that their sauerkraut has bacon in it. They do after all have a potato, smoked apple and sage vegetarian sausage.  That kind of attention to detail is rare in veggie sausages. 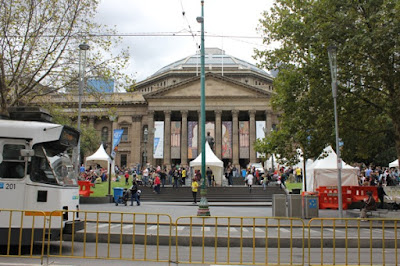 The first time I tried their snags was some months ago.  I ordered The Vegetarian.  This consisted of their potato, smoked apple and sage sausage with fried onions, rosemary mushrooms and truffle aioli on a brioche roll.  It was ok but a bit heavy for my tastes.  On my second visit I thought I would get a bit experimental and try the sauerkraut but found that it has bacon in it (though this is not stated on the menu which is a black mark against them).  On my last visit this weekend I noticed that they now have a Vegetarian Spicy Spanish Chorizo served with semi sun-dried tomatoes, chipotle aioli, baby rocket and shredded goats cheese on a brioche roll.  Kudos for having two vegetarian sausages. 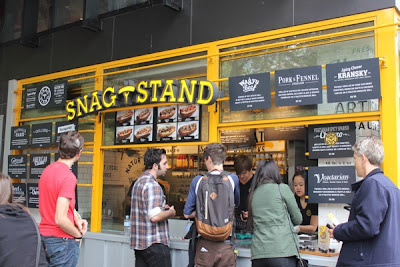 Snag stand is clever, pricey and aimed at the hipsters.  I am sure it no coincidence that it is diagonally opposite RMIT University.  A sausage in a roll with toppings costs around $10.  From a hole in the wall.  And it is called a 'haute dog'.  A buzzer accompanies your wait so that you can be buzzed when your order is ready.  Well, at least they aren't yelling out your name!  And there are some seats on the footpath where you can wait or even eat your snag once it arrives. 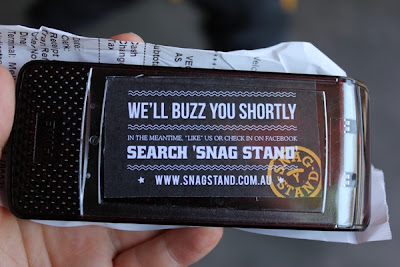 Back to Saturday, I left Sylvia and E watching some of the book fest antics while I ordered for all of us.  E got a spicy meat kransky.  Sylvia had a plain sausage and sauce.  I went off the menu again and ordered a vegetarian sausage with fried onions, cheese and tomato sauce.  Then I found that I had a vegetarian version of the Australia Fare but with a poppyseed roll.  I also ordered chips because Sylvia loves them so much and I was unsure how she would go with her snag.  When I asked, our snags were packed into a bag in closed cardboard boxes rather the the open boxes in which they usually serve them. 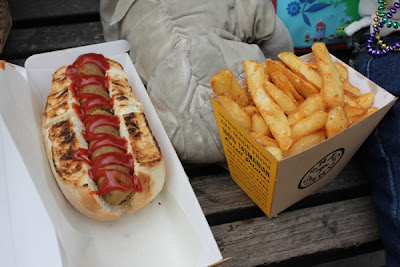 The chips were great.  Hot, well seasoned and crispy.   I was pleased that Sylvia ate half of her sausage.  She might have even eaten more but E decided that he preferred the veg to the meat sausage and ate the other half.  My onion and cheese topped sausage was not the prettiest but it was delicious and satisfying, in an old fashioned kind of way. 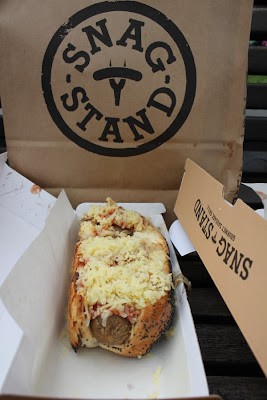 It was an easy family meal for us but caters for a broad range of people.  The sausages can be plain as Sylvia's or quite gourmet.   Gluten free sausages are available (see Where's the Beef for more information on the veg sausages) and if you are after anything vegan, you might be interested to read Louise by Degrees' post.  I will definitely be back to try out more combinations.


Update: Snag Stand is now closed in Melbourne but still seems open in other states.
Posted by Johanna GGG at 23:28