Crust Pizza -upmarket for the masses 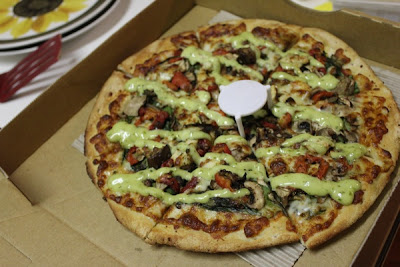 Last night after visiting my family we got home too late to have any energy to get dinner together.  Instead we ordered pizza and watched the Sound of Music.  I am very fussy about ordering pizza.  Most places have a very boring choice for vegetarians and other takeaway pizzas that I love aren't near enough to order home delivery.  So I was excited when Crust Pizza opened up in our vicinity with a range of vegetarian options. 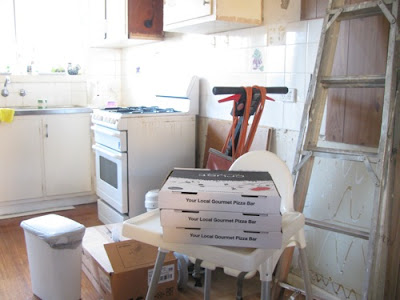 Our experience with Crust Pizza began a year ago when we did some kitchen renovations.  We weren't able to cook much so we had more takeaway than usual.  Actually we might have even had one of their pizzas before that because I have a note and vague memories of an eggplant pizza but no photos and it is no longer on the Crust menu.  However I can tell you about a few other veg pizzas that I have recorded. 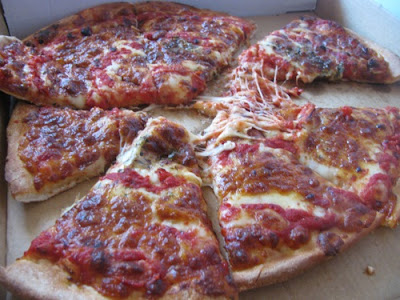 The first pizza is the Margherita.  An oldie but a goodie.  It is topped with tomato sauce, mozzarella and oregano.  This is Sylvia's pizza of choice.  She loves it because it is so plain whereas I have shunned it in the past because it is so plain.  More recently I am coming to appreciate it.  The cheese is crisp on top with the soft flavoursome sauce beneath.  I have noticed that you can also buy a smaller kiddie pizza with tomato and cheese which we might try another time.

Perhaps our different attitudes also come from our attitude to tomatoes.  I hated them as a child but gradually have come to appreciate them as an adult.  Sylvia loves tomatoes and will even sometimes eat them as a snack if I leave a bowl of cherry tomatoes about.  When we watched the Sound of Music last night, she kept talking about the scene where Maria throws a tomato to Gretel who drops it.  Does anyone else ever remember this scene!  But I digress. 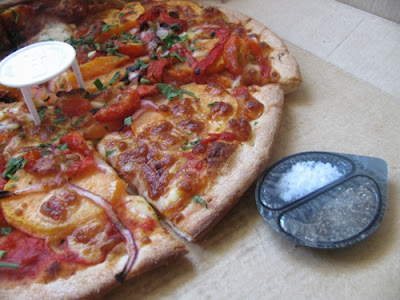 Next is the Sweet potato pizza.  Described in the menu as roasted sweet potato, roasted capsicum, spanish onions, toasted pine nuts, cherry tomatoes and; gorgonzola on a tomato base, garnished with fresh herbs, cracked pepper and sea salt.  I liked it but didn't love it.  Not quite my sort of vegetable combination.  Not enough green.  The salt and pepper on the side seemed like a gimmick.

On the positive side, the toppings are generous and the crusts are nicely cooked.  My favourite part was the little white table that kept the top of the box from pressing on the pizza.  Isn't it cute?  It looks like a little table in a doll's house and makes me want to make doll's house furniture. 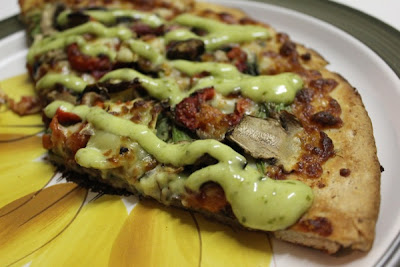 The pizza I had last night was not quite right either.  I actually liked the Vegetarian Supreme pizza - grilled eggplant, marinated artichokes, baby spinach, roasted capsicum, mushrooms, sundried tomatoes and bocconcini on a tomato base.  I just did not like the pesto aioli that was generously drizzled over the pizza.  It looked pretty but I only like mayonnaise in small doses. 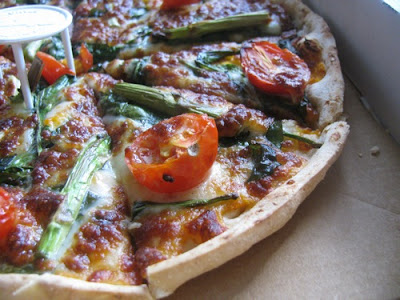 One of the things I love about Crust is that there is an option to create your own pizza.  It takes a little energy, which is not really what takeaway is about.  But it means you can choose a wholemeal or gluten free base or just more vegetables.  I have only done this once.  I had a wholemeal base with pumpkin sauce, spinach, cherry tomatoes, basil, asparagus and mozzarella.  It was great because I ordered exactly what I wanted.  The asparagus didn't quite work and I now can't see pumpkin sauce on their menu so I am unlikely to have this again.

There are a few other options I would like to try - the Florentine Ricotta, the healthy Baby Spinach pizza and the vegie calzone.  However their menu does seem to change occasionally.  The pizzas are not cheap ($16 for a large pizza) and they do not come in a small size, unless you buy the kiddie pizzas.  So Crust is a good choice for a treat but will not become a regular meal in our house.