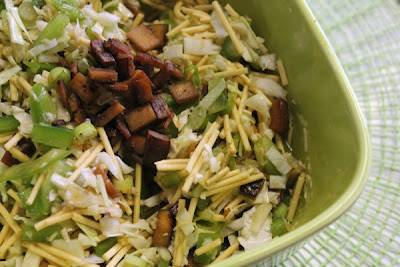 A while back I was intrigued to see Lucy blogging about reducing the sugar in a famous recipe.  I had never heard of it.  But I had to try it and find out if it was worth the fuss. We enjoyed it but the fried noodles that form the backbone of the salad aren't regulars in my pantry and is unlikely to ever be, given that I prefer dried noodles.  Nevertheless it was a nice change of salad served with some green green burgers. 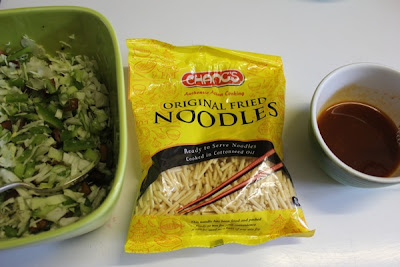 As is my way, I meddled with the recipe.  So I am not sure exactly how close it was to the famous original.  E was dubious at first and asked was I sure I shouldn't cook the noodles.  Fried noodles are a curiosity in our house.  Sylvia honed in on the carb factor and gobbled them up but they were rather spillable.  (I have wondered if freshly cooked noodles would work just as well in the salad.)  I added my current favourite tofu bacon instead of nuts and added a touch of spice for E - and for Lisa.

Whenever I add spice to any meal I often think of Lisa  of Lisa's Kitchen.  She is such a spice fiend!  So it was no surprise that when she announced that for her birthday month, the theme for No Croutons Required (that she co-hosts with Jacqueline) was a salad or soup with a kick of spice.  The chilli paste worked well in the salad dressing to give it a lift. 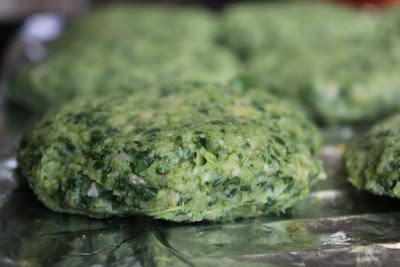 Lisa also asks how we would serve the dish.  One of my favourite ways to serve salad is with burgers.  I made a batch of spinach and chickpea burgers.  I made some alterations to the recipe and found I needed more starch to hold them together so they were quite dense but enjoyable nevertheless.  Sylvia had a few bites but was more interested in the tomato sauce on top.  I also served some corn on the cob.  We didn't have dessert but if I were to choose a cake to celebrate Lisa's birthday, it would be honey, yoghurt and chocolate cake. 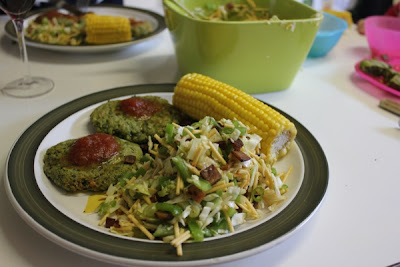 A few days later I mentioned to my mum that I had made the salad and she told me how much she loved it when one of her colleagues had brought the salad along to work functions.  Have you heard of this famous recipe, and if so what do you think of it?

Previously on Green Gourmet Giraffe:
This time last year: Artichoke muffins for the zoo
This time two years ago: Green salads for Paddy’s Day
This time four years ago: Mulligatawny and dubious traditions

Blend spinach leaves in food processor.  Add chickpeas, parmesan cheese, salt and smoked paprika.  Blend briefly so it retains a little texture.  Stir in besan and corn crumbs until it is firm enough to be able to handle.  Make into flat patties with damp hands.  I made 9 burgers.  I put them straight onto the grill because they were very fragile.  Spray with oil and grill for about 5-10 minutes until dry and very lightly browned.  Turn over and spray the other side with oil.  Grill until lightly browned.

On the Stereo:
Worker's Playtime: Billy Bragg
Posted by Johanna GGG at 22:48