In My Kitchen - Sept 2013, Vegan MoFo and new kitchen table 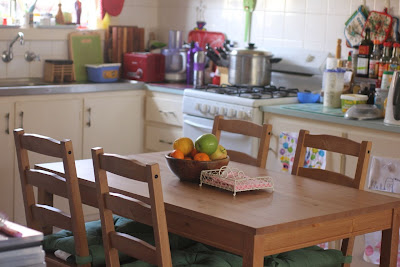 The spring has sprung!  The days are warmer, the lemon tree has more blossoms than I care to count, the evenings are filled with the scent of jasmine.  Vegan MoFo has begun and, before starting some fun posts on my theme of TV Dinners, I will give you a peek around my kitchen.  It's all vegan this month.  And if you are hanging out for the tv theme, there is a little taster at the end of this post. 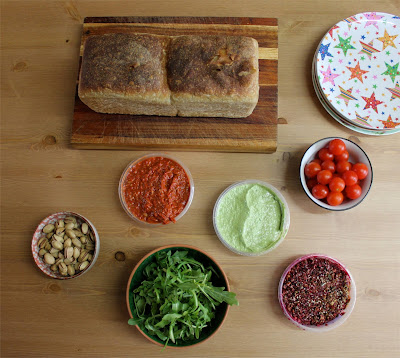 Firstly, let me introduce you to my new kitchen table.  You will be seeing quite a lot of it in my photos.  Our old vinyl chairs were falling to bits.  We decided we wanted something wooden after years of laminex.  It was cheap at Ikea.

My dad came over to help E put it together while mum and I shopped at Coburg Farmers Market.  We brought home lunch.  Sourdough bread.  Three dips from Shuki and Louisa: muhammara, tahini and herbs, beetroot and dukkah.  Pistachios.  Great with rocket and cherry tomatoes. 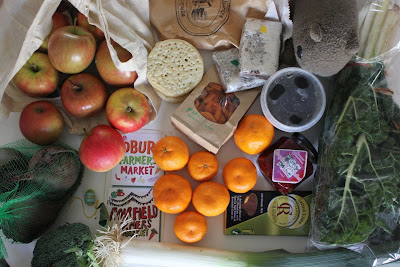 We managed to get to the farmers market twice last month.  Here is most of my purchases from our other trip.  Magnificent mandarins, crisp apples, intriguing sweet pickled walnuts, wonderful lime and salt chocolate, and soft heavenly crumpets.  And greens. 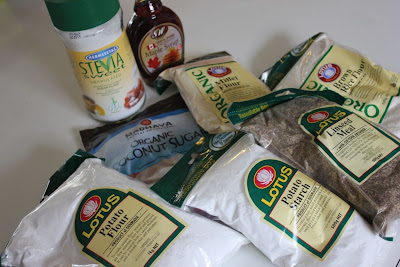 I have also been shopping at my local health food store.  I was quite impressed at their range of gluten free flours.  The stevia came from the supermarket.  I have been trying some of the recipes from Ricki Heller's Naturally Sweet and Gluten Free Cookbook that is launched on 13 September.  I will write more about it later.  Meanwhile, I can tell you I highly recommend it. 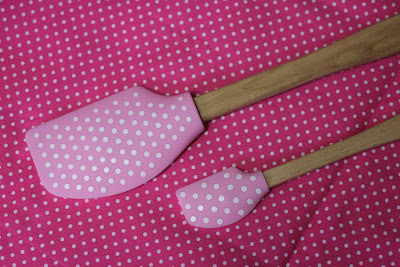 Sadly, Sylvia's predilection for pink is rubbing off on me.  I bought this spatula set at the supermarket.  She was delighted and decided the small one was for her.  It quickly disappeared.  I am glad to say it has resurfaced. 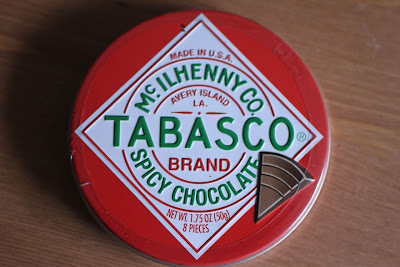 It was Father's Day in Australia yesterday.  Sylvia gave E this Tabasco Spicy Chocolate.  He puts Tabasco on everything so why not chocolate.  He tells me it is very spicy.  I didn't bother trying it.  It doesn't sound like my sort of thing.  He enjoyed it.  We also had a lovely family lunch at the Bridge Hotel in Richmond. 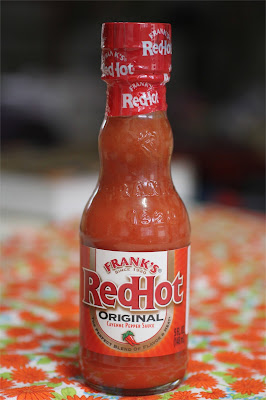 Bought on the same day in Carlton was this Frank's Red Hot Sauce.  Apparently this is used a lot in America.  I'd never heard of it.  I was intrigued by Mel's post about buffalo tofu that used the sauce.  It is still unopened.  Maybe I will give it a go during Vegan MoFo. 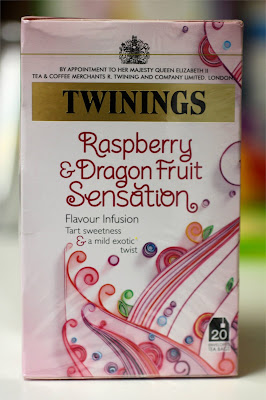 I was also intrigued by this Raspberry and Dragonfruit Sensation herbal tea from Twinings.  I have loved dragonfruit when I have had the opportunity to try it.  It is a tropical fruit that seems more at home in Darwin than Melbourne but the fruit does make an appearance in our supermarkets occasionally.  The tea is deliciously fruity.  Though I couldn't tell you the difference between the raspberry and dragonfruit flavours. 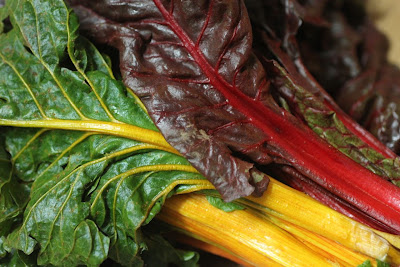 This bunch of rainbow chard is from a farmers market outing.  Who can resist these brilliant colours.  Even if it is really just fancy silverbeet. 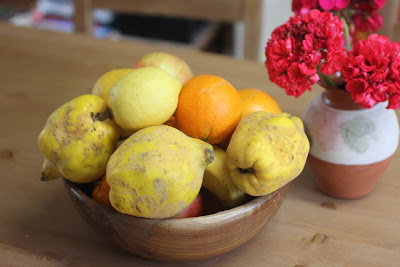 Last week Sylvia ran into the kitchen holding some pink geraniums and telling me 'the man' gave them to her.   I couldn't for the life of me work out who she meant.  It wasn't until I came out the front and saw she was talking to the next door neighbour that we don't usually see.  He and his wife also gave us some lemons and oranges from their trees.  We also have quinces that I was excited to find in the local shops.  I still am not sure what to do with them.  Poaching them would be a good start. 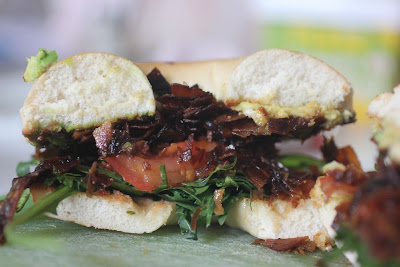 I finally made it to New Day Rising, hipster cafe in Blyth Street, East Brunswick.  I have wanted to try their CLT for ages.  That is Coconut Bacon, Lettuce and Tomato.  It is such a tiny cafe and I was feeling time-poor so I decided to take my bagel home.  It reeked of smokiness from the coconut bacon, was messy to eat but oh so good. Tomato soup from a can is one of my comfort foods.  I am usually a Heinz soup kind of girl.  This limited edition Campbell's tin celebrates 50 years since Andy Warhol painted the Campbell's tomato soup tins in 1962.  1962?  That is 51 years!  Fortunately I have E to point out the tin actually reads '50+'.  Have these tins been on our shelves for a year or did it take a while for the boat to reach us from America? 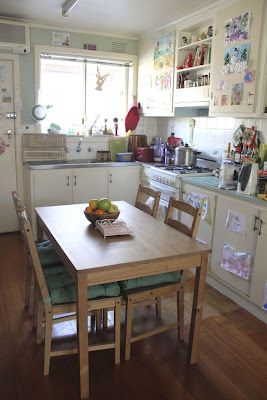 Back to my Vegan MoFo theme.  Here is a list to amuse you.  At least one of the shows will feature in my MoFo posts.  Possibly more.  Stay tuned...

Ten television characters who spend a lot of time in the kitchen
Please feel free to add to the list in the comments.

I am sending this post to Celia for her In My Kitchen series.  Check out others' kitchens or join in by sending Celia a post about your kitchen.

This post is part of Vegan Month of Food September 2013.  This year for Vegan MoFo I am cooking recipes inspired by some favourite tv shows - and veering off topic occasionally.  Go to my Vegan MoFo list for more of my Vegan MoFo posts.