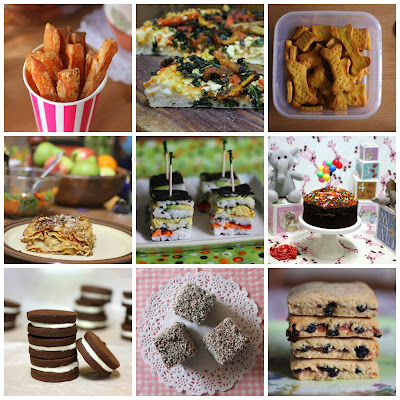 Today marks the end of Vegan MoFo for 2013.  I am sad, tired and a little relieved.  It has been fun, inspiring and busy.  Here is my reflections on my month of television related cooking.

It was my third year of Vegan MoFo and my first having a theme: TV Dinners.   Writing to a theme was fun and really made me approach my posts in a different way.  More structure, more discipline.  I started planning months ago and was glad of it.  The theme demanded a lot of time, research and thought (ie lots of surfing the net and reading out choice information to E).

I find Vegan MoFo to be a time of great inspiration.  So many great ideas flying around the blogosphere.  I was really excited by some of the recipes I tried, while a few were work in progress.  My favourite would have to be Stargazy Pie because it was my own creation and based on a fascinating pie with a great history.   It was also a fun challenge to veganise a fish pie with fish heads poking out of the pastry.

September was a particularly busy month.  My family has many birthdays and anniversaries in this month, we went on holiday for a week and we also did Christmas shopping for family in Scotland to meet the seamail deadline.  It was the month of our federal election, the Melbourne Show and the AFL Grand Final.  And I hosted another blog event this month - Pasta Please.

I made an effort not to make new dishes to blog unless they were for Vegan MoFo.  My blog backlog still grew with our holiday and the Show, which I plan to write about.  I wish I could have visited more Vegan MoFo blogs - it was easier that previous two years with Google Reader.

Yet I still discovered some great new blogs and have bookmarked heaps of recipes I want to try.  And hope to repeat some of my own Vegan MoFo recipes.  I have already remade the vegan doughnuts with more success on a jam filling.

One of the challenges with my TV Dinners theme was choosing the television shows.  Some presented themselves naturally with a classic food scene (such as Waldorf Salad in Fawlty Towers) while matching recipes with some shows sometimes felt like fitting a round peg into a square hole.  Planning ahead meant I noted a few scenes in current favourite shows.  In the end despite missing some of my favourite shows, I had more posts than days.

Before I tell you about what recipes I didn't have time for, I will give you a list of some of my favourite tv shows that I just coudn't find the food link.  Sometimes Google lets me down!  Henderson Kids, Magic Roundabout, Follow your Dreams, Life on Mars, Mr Ed, The Killing, Foyle's War, The Bill, MDA, Yes Minister, Hill Street Blues. A Country Practice, Buffy the Vampire Slayer, Game On, Grange Hill, Northern Exposure.  (Must stop or I will list every show I have ever watched.)

You can see what shows I chose at my list of Vegan MoFo posts.  This theme has made me reflect on the sort of telly I watch.  I love intelligent drama, crime (the less blood the better), comedy and I have even come to love some of the kids shows I watch with Sylvia.   - love comedy, kids shows with sylvia, intelligent drama, crime shows - british and Australian - much of it on ABC our equivalent of BBC because it doesn't have adverts and it is qyality stuffDid you notice that I really love British tv, especially when on the ABC rather than the commercial channels?

Twelve recipes that didn't make the list (because there are only 24 hours in the day):

I have considered doing more TV Dinners posts but I miss my usual rambling style.  I still have a few recipes yet to be blogged from the series and a few others I would love to make.  Who knows, there might be a life for the theme beyond Vegan MoFo

It is always a pleasure when putting a lot of effort into my posts to see them being enjoyed by others.  Thank you to everyone who read and commented on my posts.  In particularly thanks to Veganise This, the Green Cuisine, the Spade and Spoon, Candida Diet Plan and the Vegan MoFo Blog for including me in round ups.  And thank you to the Vegan MoFo team for an amazing effort in organising the event.  I also was excited to have my second Food Gawker photo up - Vegan Sushi Stacks.  Makes me think maybe I need to submit a few more photos.

And now for what will be coming up on my blog.  I'd love to take a break but I already have some posts mapped out for October.  I will post the Pasta Please round up soon, I will write about my Port Fairy holiday and The Melbourne Show, I may write up the last of my TV dinners posts that didn't make it this month, and I have an interview with Ricki Heller coming up as part of her virtual blog tour for Naturally Sweet and Gluten Free.  And maybe I will get along to World Vegan Day on 10 November this year.  Meanwhile, there is a howling wind outside and a warm bed awaits me.

I will finish with a question for you?  What is your favourite television food moment or plot featuring food?

This post is part of Vegan Month of Food September 2013.  This year for Vegan MoFo I am cooking recipes inspired by some favourite tv shows - and veering off topic occasionally.  Go to my Vegan MoFo list for more of my Vegan MoFo posts.
Posted by Johanna GGG at 23:19