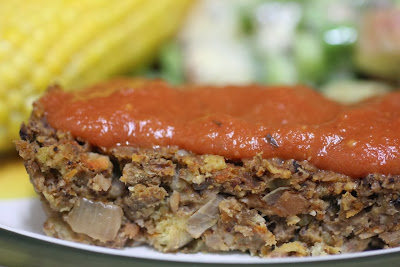 It didn't seem right to do a Vegan MoFo without including a favourite dish, nut roast, so I used it to represent a vegan version of meatloaf which was an all American meal that fitted right into the all American comedy Happy Days.

What it means to me?
Happy Days is a comedy set in the 1950s based around high school kid, Richie Cunningham (played by Ron Howard), his friends and family.  Most of the action is set either in Arnold's Diner or his home.

Richie is a bit of nerd but he is friends with the coolest dude in town, Fonzie, often known as the Fonz and played by Henry Winkler.  Ironically it is often commented these days that the Fonz might have been cool when we were kids but as adults there is nothing cool about the guy who is a high school drop out and has a toilet for an office.

Happy Days reminds me of the innocent days of primary school (maybe even high school) when we would get home from school, ask what was for "afters" (by which we meant afternoon tea) and slump in front of the tv before dinner watching shows like Happy Days, Get Smart, The Brady Bunch and The Goodies.  In my memories it seems that we watched endless reruns of these shows and knew each episode well in the days before video recorders.

We talked about the shows at school and had our favourite characters.  Everyone loved the Fonz.  And the 1950s were cool.  We all dressed up in tight sweaters and flared skirts and wearing our hair in high ponytails at the school concert and singing "Rock around the clock".  I remember my mum trying to explain that she hadn't worn the clothes that models wore in magazine when my sister was looking for inspiration for fancy dress parties.  Her advice seemed odd then but makes so much sense now. 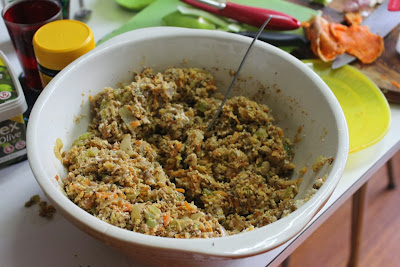 Food moment:
Happy Days was cheesy, wholesome all American family fare.  The food moment I remember the most was Richie singing "I found my thrills on blueberry hill".  I think we used to sing that line in the school playground - probably when Blueberry Big M was a popular drink.  But I also associated meatloaf with Happy Days and found a great example of this on YouTube in an episode called The Muckrackers.

In this episode, Richie's friend Potsie, breaks a tooth on a piece of bone in the meatloaf he had at the school cafeteria and Richie also has a stomach upset from his meatloaf.  He decides to write an article for the school newspaper.  His dad asks him about the facts which prompts him to go undercover.  His article makes him a hero.  He decides to write another article about going undercover, including the moment when he discovered that Fonzie has a fear of liver.  Fonzie is furious.  Howard, Richie's dad, talks to Richie about how good journalism uncovers bad behaviour the harms others but does write stories just to shock people.  Why hurt people, he argues, if they haven't done anything wrong.

The episode is worth watching just to reflect on how times have changed.  The chunky camera being smuggled in to take undercover pictures, the story being written with pen and paper, the signing copies of the newspaper. The tools of journalism have changed so much today and yet a few journalists could do with listening to Howard's wisdom today! 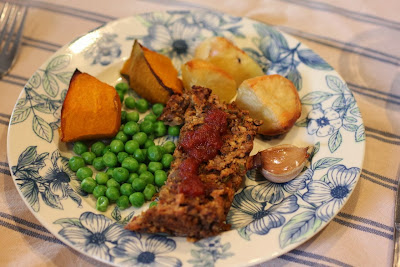 Recipe notes:
Even the meatloaf makes me a little nostalgic.  It is something my mum used to make.  I don't eat meatloaf any more but I have a thing for nut roast.  I consider it to be the veg version of meatloaf.  So that is what I made for this Happy Days post.  It is not a meal on which you would break your tooth on a bone but it does have the comfort factor.

The nut roast I chose was the Glazed Lentil Walnut Apple Loaf, Revisited from the ever inspiring Angela at Oh She Glows.  I had good intentions of following the recipe but I overlooked the flax seeds (linseeds) and used silken tofu inside, I added some roasted sweet potato I had about and I forgot to make the balsamic apple glaze. 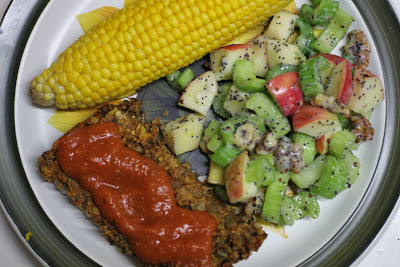 Random notes:
I made this for a family roast dinner many months ago.  It was tasty and chunky and made in a hurry.  I was in such a rush that I only baked it for 30 minutes in my oven and then wrapped it in a towel in a tin and took it in the car to my parent's place where I baked it another 15 to 30 minutes in their oven. I often made nut roasts when my mum is making a roast dinner and have the vegies on the side.  Nut roasts are easy to make and I never feel like I am missing out on anything.

I took home leftovers and ate them the next day with tomato sauce, Waldorf salad and corn on the cob.  A great old-skool vegan meal.  The sort that have some modern vegans curling their toes in embarrassment.  Just my kind of meal.

Preheat oven to 180 C.  Line and grease a loaf tin or use a silcone tin.

Dry fry walnuts in a large heavy bottom non-stick saucepan while you chop vegetables.  Stir frequently and remove from heat when they are lightly browned and/or smell cooked.  Tip into a large mixing bowl.

In the same saucepan heat oil and cook onion, celery and carrot for about 5 minutes or until softened.  Add garlic and apple and cook another few minutes.

While vegies are cooking, add remaining ingredients into a large mixing bowl with the walnuts.  Add in the vegies when cooked.  Stir together well and spoon into prepared loaf tin.  Smooth the top with the back of a spoon.

Bake for about 45 to 60 minutes or until golden and crispy on the outside.  Wait for 10 to 15 minutes before turning out of the tin.  It tastes great straight away or heated up the next day.  It slices best when cooled if you want it to look pretty!


On the Stereo:
The Velvet Underground and Nico

This post is part of Vegan Month of Food September 2013.  This year for Vegan MoFo I am cooking recipes inspired by favourite tv shows - and veering off topic occasionally.  Go to my Vegan MoFo list for more of my Vegan MoFo posts.
Posted by Johanna GGG at 23:00