Vegan sushi stack for a SeaChange 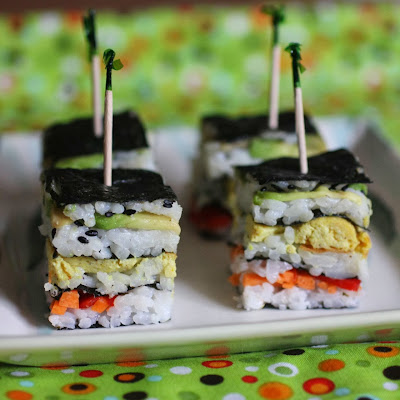 What it meant to me?
SeaChange is an Australian drama series set in the fictional seaside town of Pearl Bay.  The premise is based around our main character, Laura, leave the fast-paced souless lifestyle of the city for the slower, gentler and friendlier life in this small town.  Laura takes up a post as the town magistrate so many plots centre on law and order and politics as well as her love life.

The town has many quirky characters: the calm and reasonable Meredith who own the pub and has a photographic memory; the passionate Phrani who drives a colourful combi van, makes spicy curries; the angst-ridden Angus who works in the Magistrates office but is a surfer at heart; the restless Max who is tough on the outside after life as a foreign correspondent; the nervous Heather Jelly who perhaps has the biggest character development of the series in her change from stay at home mum to capable career woman; and then there is the mysterious, laconic, talented and occasionally charming Diver Dan.

The series started when I was living in the UK.  I missed the buzz it created.  But on a trip home I was drawn into its aura when my family took me to lunch at Diver Dan's Boathouse in Barwon Heads.  More recently we bought the box set of the series and watched it on DVD before discovering all three series are on YouTube.  (I should add that this post is for Hannah who demanded requested SeaChange in this Vegan MoFo series.)

It wasn't just the hype that drew me to the series.  It felt quite close to home.  My parents left the big smoke of Melbourne when I was too young to remember the place and took us to live in a small country town.  (Technically this is a tree change rather than a sea change.)  To me, small town life was normal but my parents faced the challenges of fitting in to a small community.  My dad even co-founded a local newspaper.  The town was close to the beautiful beaches of the Great Ocean Road, which is close to the beach towns where Pearl Bay was filmed. 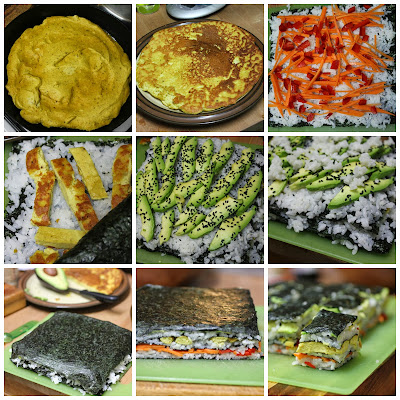 Food featured:
It was hard to choose a recipe to reflect SeaChange.  It was a tyranny of choice.  The community orders pizza during a hostage situation, Laura makes peas and rice for a visiting Buddist, Max is offered fruitcake when he visits his dad, Phrani makes amazing curries in her cafe, Heather offers pikelets with gooseberry jam to a business meetings,

In fact, food is often used to paint a character or a situation.  Laura's shortcomings as a mother are suggested by her inability to cook, just as Heather's perfection as housewife are suggested by her amazing baking.  Kevin shows his love for Phrani by trying her spicy curries.  We are shown how Heather is changing her ways but the town isn't when she is shunned for her exotic suggestion of a hangi bbq at the Women's Auxillary meeting.  (To which Heather replies “we’ve gone right back to the old days of cocktail onions on toothpicks – its’s a real conservative backlash”.)  Diver Dan's mysterious ways are reflected in the exotic food he makes, while Warwick shows himself to be safe and boring in his choice of bacon and eggs for breakfast and romantic dinners.

In the end I chose sushi because I fancied it.  It was suggested by Karen's difficulty in settling back into Pearl Bay from her travels.  While her ex-boyfriend Angus was content to eat a counter meal at the pub - steak diane on a Thursday and fish and salad on a Friday - Karen fancied eating at a Japanese restaurant.  Sushi also seemed to reflect the seaside location and Diver Dan's exotic cooking.

If you want to see more of sushi in tv and film, check out this list of sushi moments. 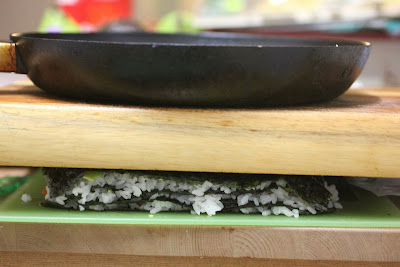 Recipe notes:
I made a fairly plain sushi quite often at home.  We don't have local sushi cafes and Sylvia likes it plain.  For this recipe I pushed the boat out and made a fancy version that is like the club sandwich of sushi.  I bookmarked this sushi stack some time ago when I saw it made by Clare at Chez Cayenne.  Not only did I love the idea of layering the rice, nori and fillings but I was inspired by the idea of including a tofu omelet.

My fillings were fairly similar to Clare's.  I had ripe avocado to use, carrots in the fridge as always and lots of tofu.  I had only made a tofu omelet once before and it was so soft I could barely tear it apart for Pad See Ew.  This omelet was much firmer and a great success.  I was able to slice it up neatly.  And it tasted so good that it was in danger of becoming my dinner and the sushi idea pitched into the bin.  I showed restraint and was glad it went into my sushi.

Layering the vegies was a bit more fiddly and cutting it into neat slices was a challenge.  I am still undecided about if it is easier or harder than rolling up sushi rice in nori sheets.  I am convinced it is an impressive and delicious way to serve sushi.  And I think you end up with more filling and less rice this way.  What is not to love about it! 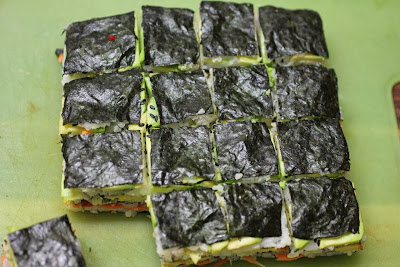 Random notes:
Today was a big day.  The AFL Grand Final.  If you don't know what I am talking about, you don't live in Melbourne and you don't have a brother who is so obsessed with the footy that you are invited to watch the game on the proviso that you don't speak a word.

Actually I had a nice relaxed afternoon at my brother's place for the Grand Final and I was allowed to yell at Freo's missed goals along with everyone else.  It would have been so lovely if Fremantle had won and probably best if I don't tell you what I think about the Hawks.

Best to focus on footy food.  I took along plain old rolled sushi with avocado and some mini jam doughnuts.  There were lots of hot dogs and sausage rolls for the meat lovers.  For me there was also spring rolls, onion bhajis and samosas.  For everyone there was also lots of chips, chocolates, caramel popcorn and vanilla sugared almonds.  I just wanted a simple tomato lentil soup tonight. 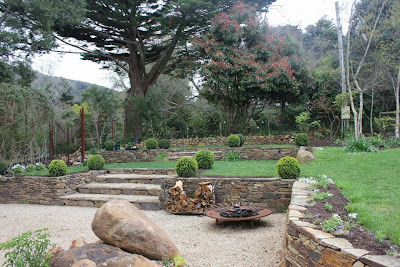 However I am not such a footy fan that I didn't join my mum, sister, niece and daughter on trip to a nursery and in search of gluten free apple crumble in the middle of the final.  The GF-friendly cafe was closed so we weren't out too long.  Back in time to watch more football, eat more snacks and play hide and seek.  Above is a photo of the beautiful nursery that we visited.

I also found that the tofu omelet was very good in a sandwich.  It make me feel a little nostalgic.  The first meal I ever ate out with E was at a place in Edinburgh called Web 13 and he had a fried egg sandwich.  Who says romance is dead?

Simmer rice in 3 cups water for about 20 minutes over a very low heat (or cook according to packet directions).  Stir vinegar, sugar and salt into hot cooked rice.  Cool  (I spread mine on a dinner plate and put in the freezer for fast track cooling).

Meanwhile make the omelet and chop the vegies.  When omelet has cooled, slice thinly.

To make the sushi stack, spread rice as thinly as possible on a nori sheet (on a chopping board), using the back of a spoon to spread it thinly.  Scatter with carrot sticks and red capsicum.  I scattered some rice on top but it was a token effort.  On a firm surface spread rice as thinly as possible on another nori sheet.  Place on top of the carrot layer.  Arrange tofu besan omelet slices over the top of the rice.  Spread rice on a third nori sheet on a firm surface and then place on top of the omelet layer.  Arrange avocado on top, scatter with black sesame seeds and more sushi rice.  Cover with final nori sheet.

Use chopping board and heavy frypan to press down the sushi stack.  Leave for at least 15 minutes.  Remove weight.

Use a sharp knife to trim edges and gently slice into small squares.  Keeps well overnight in the fridge.  Serve with soy sauce on the side for dipping the sushi in.

Blend tofu, olive oil and mirin in blender.  Transfer to bowl and mix in remaining ingredients.

Use an eggflip or spatula to loosen so it slides around the pan.  Carefully flip (or slide) onto a dinner plate and cool in the fridge until you need to slice it for the sushi.  This can also be used in sandwiches.

This post is part of Vegan Month of Food September 2013.  This year for Vegan MoFo I am cooking recipes inspired by some favourite tv shows - and veering off topic occasionally.  Go to my Vegan MoFo list for more of my Vegan MoFo posts.
Posted by Johanna GGG at 23:40