Sandwiches - not so like Mrs Doyle of Father Ted 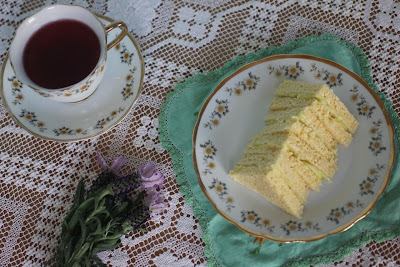 In which I am suffering Vegan MoFo fatigue and slow the pace with some easy cucumber sandwiches and leftovers sandwiches and celebrate the brilliant Father Ted and the memories it evokes.

What does it mean to me?
Father Ted is a surreal comedy set in the home of three priests in Ireland.  Father Ted thinks he is the smart one but actually he is just as dumb as Father Dougal.  Meanwhile Father Jack is locked away due to his constant swearing and alcoholism.  Their housekeeper Mrs Doyle is constantly wafting about offering food and insisting " go on, go on, go on, ah you will, you will, you will."  The plots are both daft and hilarious including a song for Eurovision, the perfect priestly response "that would be an ecumenical matter", and the 'All Priests Stars in Their Eyes Lookalike Competition'.

It would be enough to say I just loved this show but there are many more reasons it means a lot to me.  The show was hugely popular when I was working at a BBC website in the late 1990s.  In fact it is one of my clear memories of not enjoying being in the thick of the showbiz world.  I was there at the time of the death of Dermot Morgan, who played Father Ted.  I remember one of the staff saying, how sad that he died, now what do we put online.  It seemed heartless and shallow. 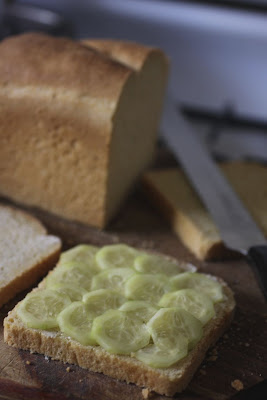 At the time I also worked with another backpacker who was probably one of the biggest music fans I have ever met.  She and her friends were constantly blagging freebies to any events, making their own backstage passes and chatting to the musos as much as they could.  I stayed at their place a while and remember being there on the day they got one of the new Divine Comedy singles and free passes to their show.  I went along with them to the show and can't listen to 'National Express' without thinking of staying there at a time when I took quite a few National Express buses.

Another show I went to see around the same time was a charity variety show at the Globe Theatre, featuring among others, Ardal O'Hanlon who played Father Dougal.  I think this was a freebie from the BBC.  I loved seeing Ardal O'Hanlon but I was just so excited to be at the reconstruction of Shakespeare's Globe Theatre, soon after it opened. 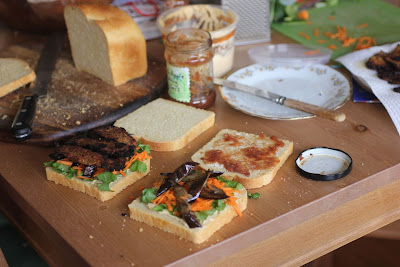 Yes the show makes me all nostalgic for so many reasons and I haven't even gone into my Irish Catholic upbringing or many visits to Ireland where my sister now lives.  But I have said enough for now.

Food featured:
Mrs Doyle is constantly offering the priests copious amounts of tea, cake and sandwiches.  I can't remember what sort of sandwiches they were but I suspect they were the sort we would have had at church functions, fluffy white bread, lots of butter with very plain fillings such as ham and cheese, lettuce and cheese, tomato and cheese, or egg and lettuce.  These are not at all my sort of sandwiches.  Yet I thought cucumber sandwiches might have been the sort of thing she would have made so I set myself this challenge.

Recipe notes:
This is not really a recipe but a reflection on a few sandwiches and an excuse to try some hippy cucumber sandwiches.  It is even herbal tea in the tea cup.  I have never been very keen on cucumber sandwiches.  Too plain and boring.  When I made some sourdough polenta cheese bread recently, it seemed a perfect opportunity to make cucumber sandwiches.  I even used margarine and cut the crusts.  For fun.  Then I ate the crusts too.  The bread was so tasty that the sandwiches wouldn't be lacking in flavour.  I quite liked them, though the bread could have been a tad softer. 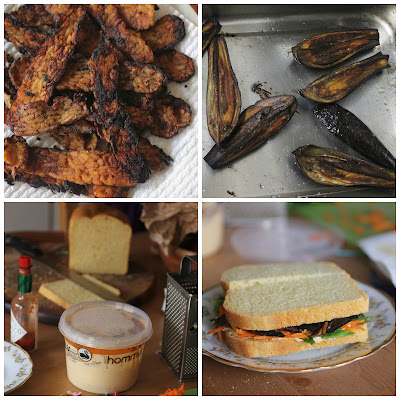 On the same day I had leftover eggplant and tempeh bacon from my Stargazy Pie.  Plain sandwiches bore me.  When we have plenty of fresh bread and interesting sandwich fillings I love to pile up some complex sandwiches.  On this occasion I made E and myself sandwiches with spinach, grated carrot, hummus, roasted eggplant, tempeh bacon and chutney.   Pretty damn good.  Avocado and tomato would have been great here.  I must experiment more with tempeh bacon in sandwiches.

Random notes:
I love making sandwiches but this post isn't just about sandwiches.  It is about my kitchen energy.  I don't always make marvellously complex meals.  Sometimes I just am too tired and it is beans on toast or whatever leftovers are in the freezer.  Sometimes just a fancy sandwich.  Made with leftovers.  I love leftovers.

Today I finally got into the kitchen again and baked and made a fancy dinner for the first time in a week and a half.  Yes, we have been on holiday.  But I am also finding Vegan MoFo tiring.  Don't get me wrong.  It is huge fun.  I am so full of ideas about recipes to make for my TV Dinners theme.  But I keep reading about all the shows I am writing up and then I end up writing even more than I intend.

I am making an effort to only make food that fits the theme, which is hard.  Especially with all the great recipes I am stumbling across during Vegan MoFo.  I am also a bit sad that I am not finding time to respond to comments so I wish to thank you to those who are taking the time to comment - it is much appreciated.  I will be sorry when it finishes but I am also a little relieved we are over the halfway mark. 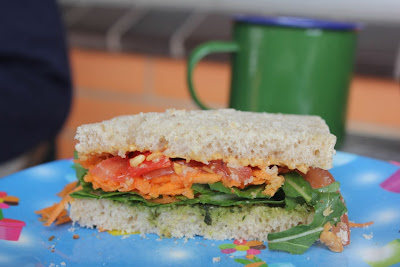 I will leave you with another sandwich.  We had a lovely warm Sunday.  After hitting the shops for some groceries, we just were enjoying being at home after our holiday.  Sylvia and E sat on the verandah while I made lemonade and salad sandwiches - peanut butter, rocket, grated carrot, red capsicum, pesto.  Sylvia amused me sitting there with her sunglasses on and calling me waitress.  Seems she got into the habit of eating out while away.  Luckily I learnt to make sandwiches like a professional in my student days.  A very useful skill.

This post is part of Vegan Month of Food September 2013.  This year for Vegan MoFo I am cooking recipes inspired by favourite tv shows - and veering off topic occasionally.  Go to my Vegan MoFo list for more of my Vegan MoFo posts.
Posted by Johanna GGG at 23:27