D'oh D'oh Doughnuts - vegan and baked - and The Simpsons 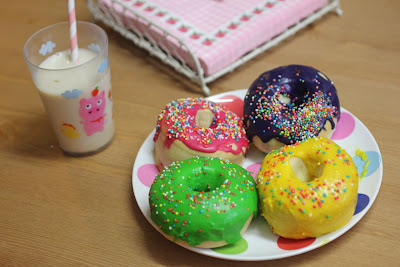 Mmm Doughnuts!  In which I make baked vegan doughnuts that are loved by my dad, who by the way is not at all like Homer Simpson, except that he loves doughnuts!

What does it mean to me?
The Simpsons is a cartoon comedy about a regular American family.  Homer, Marge, Bart, Lisa and Maggie.  I remember when it started and there was discussion about how good it was and one of my teachers said it was rubbish and I wasn't a fan.  It was loud and brash and I didn't watch much tv at the time.  I was too busy studying.  I was never a student who spent hours watching trashy tv (apart from a spell being fixated by Neighbours). 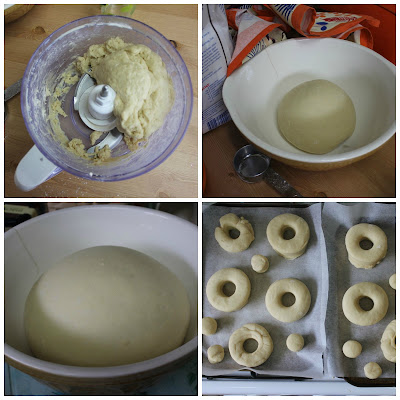 For years I lived in student households without a television.  Finally we had a housemate who brought her telly into one share house.  It remained in her bedroom.  She loved the Simpsons.  I remember being in the loungeroom and hearing her raucous laughter coming from her room as she watched it.  She had an infectious enthusiasm.  Before we knew it, the rest of the household were joining her in her room, all huddled together on her double bed, to watch the Simpsons. 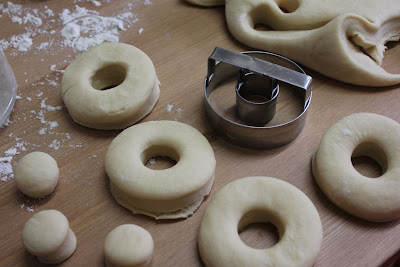 For a while I watched it a lot.  I loved the sharp humour, the pathos, the ability to laugh at American culture.  I loved Lisa who had morals and ambition and was clever.  She even became a vegetarian.  I loved that the characters were never going to grow up and leave me.  Then I moved on.  I still say d'oh sometimes. 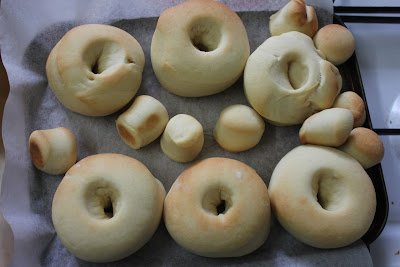 Food featured:
The father in the show is Homer Simpson.  Large, loud, slothful, thick and yet lovable.  When it comes to food, doughnuts loom large.  He would sell his soul for a single doughnut, thinks the universe is doughnut shaped, and when a runaway monorail is rescued by a huge doughnut he sighs, "doughnuts, is there anything they can't do?"  Mmmmm doughnuts. 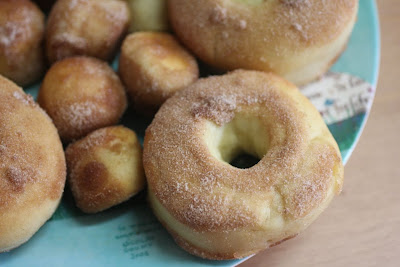 Recipe notes:
I made Mini baked doughnuts recently that used egg and I was interested to veganise it.  This was easy because Aparna had already made some at My Diverse Kitchen.  They were every bit as good without egg.  I had been so wary of baking doughnuts but I have discovered that it is the soft yeasty innards rather than a crispy fried exterior that seems to be the trick to making doughnuts.  (And I couldn't deep fry to save myself!)

My favourite doughnuts are jam filled but I hate piping it into the doughnuts and I wanted to try my doughnut ring cutter.  I rolled some in cinnamon and sugar and made lurid coloured glaze for others.  I still prefer jam doughnuts.  If I can't have jam I would prefer cinnamon sugar.  And smaller.

These doughnuts were huge.  I suspect I didn't roll the dough quite thin enough, because I didn't take into account just how much they rise with the yeast and the baking. 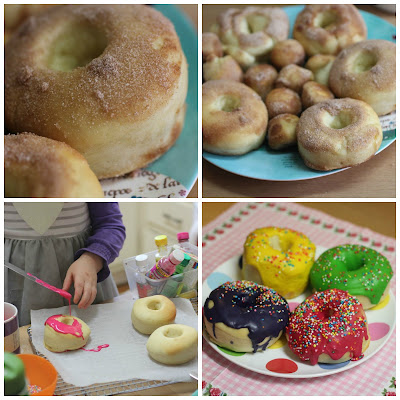 Random notes:
My parents came for lunch.  Then they rushed off to a political rally while I stayed home and baked doughnuts.  (That sounds wrong.  I should be out rabble rousing while my mum bakes for me!)  I was relieved to get them made before my dad returned.  He is a bit of an expert when it comes to doughnuts.  The yardstick is the jam doughnuts at the Vic Market.  He does a lot of tasting at the football too. 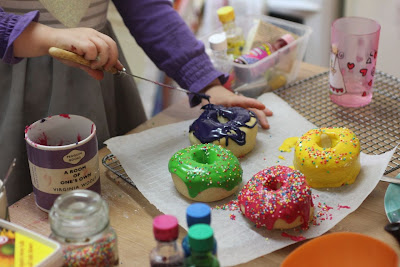 My dad was most impressed.  He was amazed I had made them and said they were the best he had had since the Vic Market.  That's high praise.  I don't imagine that the doughnuts at the footy are anything to write home about.  I was glad to be a domestic goddess if I can't be a rabble rouser. 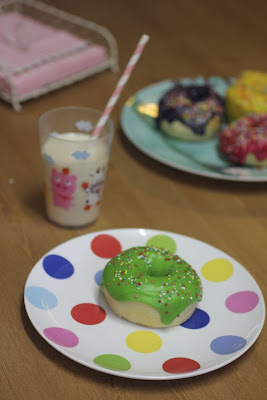 We covered half of the doughnuts in cinnamon sugar for my parents but left the others to cool down so we could ice them.  (It is always icing in Australia.  I don't understand why cakes are frosted and doughnuts are glazed in America.)  My preference would be a rich chocolate icing.  I only did the icing for Sylvia and E so I let them choose lurid colours.  And sprinkles.  It was fun to do but a bit sweet to eat. 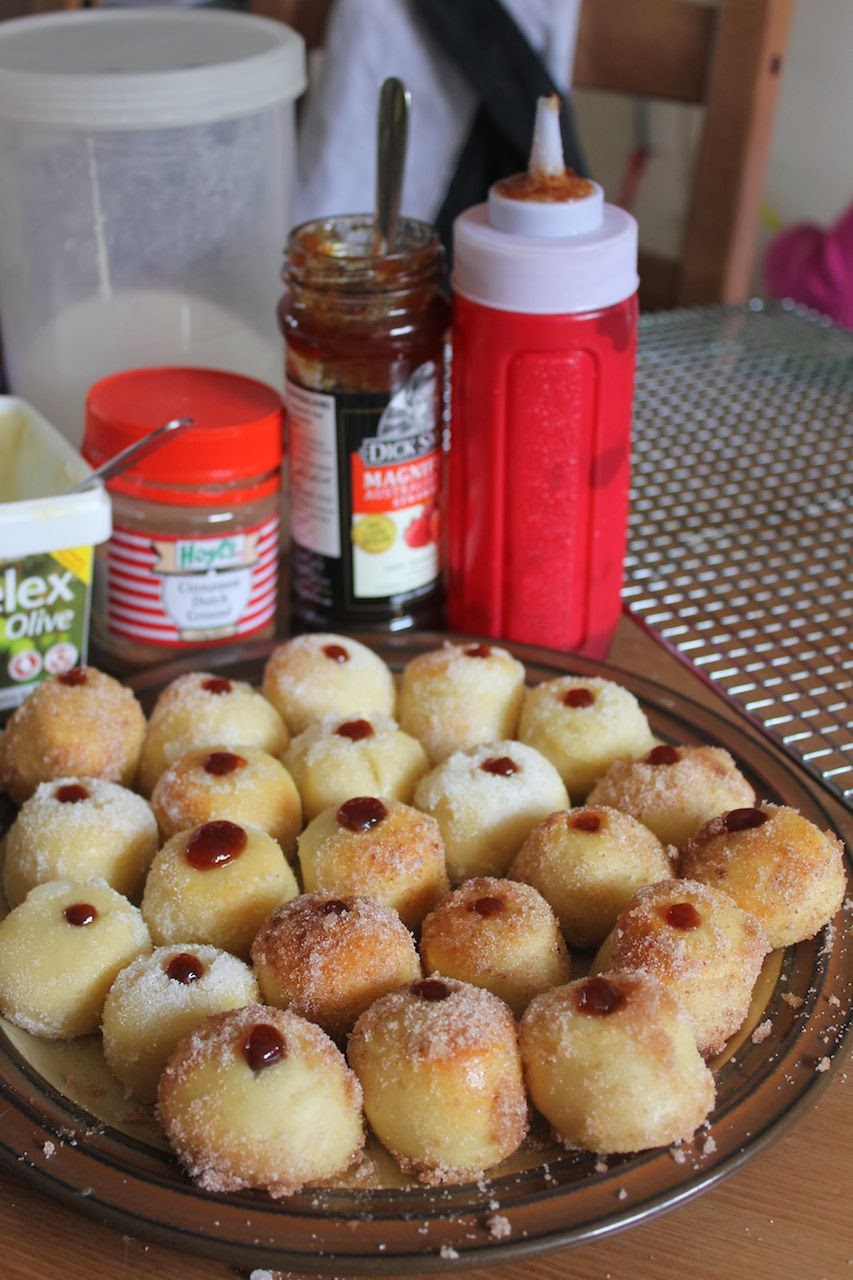 Update: I made these doughnuts again tossed in sugar and cinnamon and filled with jam - using a squeezy bottle (cheap at the supermarket) made it so much easier to fill the doughnuts with jam).  I took some to the Grand Final and some to my dad's birthday.  They are best eaten fresh but can be eaten cool on the day of baking and still very good.

For the topping:
75 to 100gm butter, melted
1 cup caster sugar + 1-2 tsp cinnamon (more or less, depending on your taste), mixed together
or
icing sugar, water and food colouring, plus sprinkles
or
jam to pipe into the doughnuts

Mix sugar, milk, yeast, salt and vanilla in food processor (or by hand).  Add 2 and 1/2 cups flour.  It will be quite crumbly and not quite sticking together.  Add butter and it should form into a sticky ball.  Add about another 1/2 cup flour to make dough that is slightly sticky but can be handled without it all coming off onto your hands.  Turn out onto a lightly floured surface and knead for a few minutes until you have a smooth ball of dough.  Place in a large bowl and cover with a tea towel.  Prove for 1 hour or until doubled in size.

Punch down dough and knead for a few seconds.  Roll out to about 1 cm thick (or maybe even a bit thinner as mine were quite thick doughnuts).  Cut out into doughnuts with a hole or just into round doughnuts with no holes.  Place on a tray lined with baking paper, allowing for about 2 cm between each doughnut.  Cover with a dry teatowel.  Leave to rise for about 20 minutes or until sort of doubled (I find it hard to tell at this stage.)  Meanwhile preheat oven to 200  C.

Once doughnuts are risen, bake for 5 to 10 minutes or until lightly golden brown.  (Most of mine took about 10 minutes though a few still looked very pale and were left in a few minutes more.)  Turn onto a wire rack.  If you are making cinnamon doughnuts, melt butter in one bowl and mix sugar and cinnamon in another.  Dip warm doughnuts into butter and then cinnamon mixture.  If icing the doughnuts, let them cool and then spread icing on top and cover with sprinkles as desired.

On the Stereo:
Songs for the young at heart: various artists

This post is part of Vegan Month of Food September 2013.  This year for Vegan MoFo I am cooking recipes inspired by some favourite tv shows - and veering off topic occasionally.  Go to my Vegan MoFo list for more of my Vegan MoFo posts.
Posted by Johanna GGG at 11:37