Sausages, Election and Kath and Kim 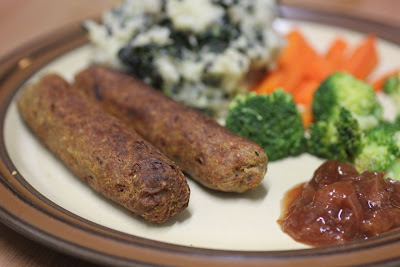 I finally make vegan gf sausages in homage to Kel Knight, purveyor of fine meats.  And I post them today in memory of all the sausage sizzles around the country for election day.

What it means to me:
Kath and Kim is a comedy about a dysfunctional mother and daughter in the working class outer suburbs of Melbourne. It is a show that makes me cringe because there is so much truth in the characters and it can feel uncomfortable to laugh at them.  But I do in the nicest way possible.  (Think the discomfort of watching The Office.)

This show is full of actors that I have been watching for a long time.  They are particularly memorable for all their roles on sketch shows.  I remember loving Glen Robbins on the Comedy Zone when I was at school and many others were on Fast Forward.  The characters reflect people I know and visit places that are familiar to me - Flinders Street train station, the shopping centres and Ikea.  Their catch phrases have entered out local lingo.  'Noice, different, unusual', 'But mum, it's all you can eat', 'It's mummy's turn now'.

Food featured:
The mother in the series, Kath Day, has a boyfriend called Kel Knight.  Her 'great hunk o' spunk'.  He greases his hair and combs it over the bald spot.  He is a health nut and a butcher: 'purveyor of fine meat'.  (As E likes to say, meat to please you, pleased to meet you!)  To use some Aussie slang, he is a bit up himself!

Kel Knight is very proud of his sausages.  He likes to spend time searching for new flavours and in the third show, spends time trying to develop a new gourmet sausage to celebrate his forthcoming wedding with Kath.  I love a vegie sausage so this was a great excuse to make some.

Recipe notes:
I have tried chorizo sausages with gluten flour before but I have never been a fan of the gluteny taste of seitan.   I saw a recipe for vegan and gluten free sausages on The Crabby Crafter a couple of Vegan MoFos ago and have intended to make it ever since.  Finally its time had come.

I am not so keen on rice flour so I had decided that chickpea flour would work well.  Unfortunately the first attempt was not successful.  The mixture was a bit dry but would come together if squeezed hard.  But once cooked it was too dry.  Even when drowned in caramelised onion gravy.  I learnt my lesson when making them again.

My second attempt was far more successful.  I used different flours and made sure the mixture was soft enough to knead.  They cooked under the grill (broiler) to a lovely golden brown.  The texture was a little less robust than the gluten flour counterparts but still held together very well and had lots of good flavour.

Random notes:
We eat sausages a lot.  I usually buy them but I like to make them occasionally.  This recipe takes longer than buying them, despite being just a matter of mix and steam.  I love making bangers and mash for an easy meal.  The second lot of sausages was made for a visit by my dad.  He enjoyed them.  I was a little stressed because it took me so long but at least I didn't try making chips.  As you will see in the photos, I was experimenting with sausages and chips in a few meals.

I am posting the sausage recipe today because it seemed topical.  Today was a federal election in Australia.  All of Australia loves a bbq sausage and never more so than at the polling booths.  In fact with all the discussion of people voting early, one of the issues was about missing out on the sausage sizzles on election day.

We had quite an interesting trip to the polls today.  When setting out to the school where we usually vote, and a neighbour told me it would be an hour queue and there was a quieter one nearby.  We went there and then back to the school for the cake stall, the second hand book stall and the playground.  Then over the road to a community centre where we were given herbs, ate quiche and admired their vegie garden.  On the way home we stopped in at a local op shop and found they are closing next week and have 50% off.  We made purchases.

It was a nice day but goodness it has been a depressing campaign with the race to the bottom with refugee policies (including buying all the leaky boats in Indonesia to stop asylum seekers getting ti Australia), 'suppositories of wisdom', more arrogance than compassion, and lacklustre leaders.  So rather than dwelling on results (we live in a safe seat where there are no surprises), here are some things that made me smile today:

I am sending these sausages to Jac of Tinned Tomatoes for her Bookmarked Recipes blog event because I am really pleased to have finally made this recipe that has been on my to do list so frequently.  I am also sending them to Ricki Heller's Wellness Weekend blog event.

Mix together all ingredients.  Check seasoning and adjust according to taste.  It should come together to make a dough that you can knead with perhaps a few cracks.  Grab handfuls and roll into sausage shape.  Wrap each sausage in foil (twisting each end like a Christmas cracker to seal them) and place in a steamer basket.  Steam for about 40 minutes.  They are now ready to grill or fry and I think they would even be sturdy enough for the BBQ.

* Psyllium husks are not essential.  The Crabby Crafter didn't use them when she made them but I really like their binding properties - and I also have a tub of the stuff that needs to be used. (I have had a few comments ask about this so hopefully this helps)

This post is part of Vegan Month of Food September 2013.  This year for Vegan MoFo I am cooking recipes inspired by some favourite tv shows - and veering off topic occasionally.  Go to my Vegan MoFo list for more of my Vegan MoFo posts.
Posted by Johanna GGG at 22:59